I don’t know how to navigate this. I don’t know how to balance out this future placed bereavement. I have been pressuring myself to “figure it out” because I feel overwhelmed by a lot in life right now. Something has to give or I’m going to crash. My daily routines are way off, and I’ve been sleeping far more the past few days. After 43 years I know exactly what that is – I’m overwhelmed by compressed extremes along a strange schedule of chronology.

The one that is hitting me hardest is Clayton’s funeral. I have poured so much energy into growing through being widowed but who goes through the pre-funeral stage 4 years later? Most of us have the closure of a service shortly after our loss. Now I’m writing a speech and picking out flowers for his service. My timeline is out of phase and there is no socially normal pattern to follow. I’d be home, excused from work, excused from obligations and the world would know why. People would have it at the front of their minds that I was figuring out life after loss. In my case, people knew, people moved on and people aren’t with me in the usual way. I can’t expect people to think as if Clayton just passed and his funeral is in 13 days but also who has this kind of reversed schedule of events? For those of you who have had loss you’ll understand when I say I’m back to that strange time after the calls, after the hugs and after the “I’m so sorry for your losses” all goes away – The grief silence is deafening.

I’m navigating my grief, managing that people forget this unique timeline all while fielding odd opinions from others which would never be said if Clayton’s funeral was done within the cultural norm. No wonder people don’t share about grief like they should when others pour shame on it:

“Time to grow up and stop sharing this stuff. You’re being a baby.”

I won’t be bullied out of my bereavement. If anything, my loss allows me to create a space for others to gather. I hold way more positive power than a few darkened souls trying to minimize my milestones. If anything, I’ve learned I can generate immense energy and I’ll shine brighter to break them if I have too. Perhaps that why this timeline is necessary, and more doors are being opened for others to walk through in safety. That would at least mean this stage has greater meaning through the grief.

I know I’ll figure out how to navigate my strangely timed normal. I’m not going to rush any of my growth for anyone else, however, I am honestly looking forward to my next steps forward finally being behind me. I just need to walk through my past that’s been placed in my future… 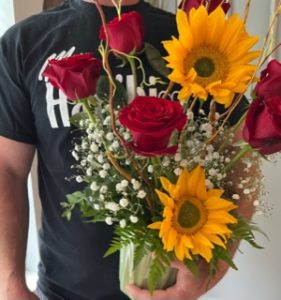