The first thing I learned to do when Clayton passed away was say “No”. I said no to getting out of bed, no to eating, no to showering, no to the gym. No was the safest place I could hide myself. Saying no stopped the world and that is just where I wanted to be.

As time began to pass, I would start saying yes to the basics of life just to function like “normal” out there in the big world. I had to say yes to working (two jobs now). I had to say yes to folding my clothes, washing the dishes and making my bed. Slowly I got my feet back under me and stood up to start walking my journey but, this time it was just me. No advice from Clayton. No reassurance. No map. Just a broken compass in my heart and fear I’d pick the wrong path.

Through the first year, I walked guardedly through widowed mist seeing shadows, hearing strange sounds and continuing to say “No”. Friends would call to me to follow their voices and go out. – “No”.

I just couldn’t bare to step into a space where Tin and I had created a memory, or worse, see others getting to have the memories we never made. I can’t. It’s painful. – “No”.

I’ve said no to many things over the past 2.5 years because I feared the pain in the possibilities of yes. Yes meant allowing others in and what if I lost them too. I said no to dinners, drinks, dancing. I said no to opening up to new people and I said no to celebrating anything including holidays. What I’ve realized this year is that being afraid of the possible pain is also keeping me from the possibility of creating another fulfilling life. I’ve been feeling trapped in this crushed kingdom and my only choice is to say “No” or “Yes”. Now it’s time to start saying yes and not fear the possibilities of hurt, rejection and failure. I’ve already endured the weight of all three of those possibilities but I have to have faith that muscle memory will keep me standing if the weight returns.

I’ve started to say yes to the one thing that can help me find my new world. I am saying yes to trying. I’ll try and I’ll keep reminding myself that you can’t fail if you don’t try but you can’t succeed either. The past month has been a whole lot of diving in and saying yes to trying. I said yes to date someone but that has fallen back to being a friendship. It’s ok because, buried in the possibility of failure, was actually a gift – The knowledge that I could say “Yes” to trying to find love again.

Yesterday was one of the hardest “Yes” moments of my widowed wondering. Staying with a friend for Thanksgiving put me into a scary situation. Holiday decorating happens next. Three years ago to the day, Clayton, my mom and I went shopping. I stood back and soaked in what I knew would be a beautifully painful memory, Clayton and my mom searching for that one special tree – His last one. I haven’t decorated since.

All day yesterday I replayed that memory. I had moments where tears wanted to well up but I focused on “yes”. Even if I cried my eyes out putting up decorations, it was going to be the best try because it was my first try. So as I picked up a decoration to hang, I paused, hesitated and then said “yes”. I placed the silver ornament on the tree and stood back. I had done it. No one in the room realized what had just happened but I realized I was ok. A monumental event bathed in lights alongside laughter, holiday music and all possibilities… 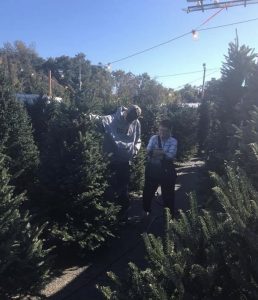