Clayton, I gave the bike away. The one you gave me for Christmas. I was going to ride it to work but life. Right? You got sick. I needed to have my car so I could get back to you as fast as possible each of every “our last days” and then you died – Life right? The gears of that bike just collecting grief’s grit, I thought about getting rid of it but I felt grief’s guilt. If I got rid of it, you might somehow be mad so I just left it.

This year, a friend went through a really difficult relationship that ended. He moved out to start moving forward. He is grieving the death of the person he thought he knew. In many ways, he is bearing a version of widowed wounds because the edge of Bereavement’s blade strike’s blindly in battle. We have had some deep conversations about managing the minutes and moments of feeling difficulties, darkness and depression.

I offered insight being 3 years ahead on the road of a loss. One of my comments was about letting go of objects that no longer serve you. It’s hard but you don’t need to keep carrying the weight. Funny isn’t it? How we don’t apply our own advice to our experience. Later that day, the bike caught my eye and I knew our conversation was a cosmic creation for both his and my benefit. So I messaged a big group to see who could use my bike and it just so happens my friend who is trying to find himself again wanted it.

As we loaded the bike up, I remembered that there was an air pump, helmet and bike lock in the porch closet. I don’t even know the last time I looked in there. I opened the door and opened an internal apology to you. I knew that the bike would be better to serve another but a new home means again that you’re not coming home to me, at least not in the way I want. I need to remember that holding on to objects aren’t the same as holding you. I need to make space in my arms to hold myself and whatever life hands me along this new way.

So I grabbed the stuff and your level slid from the back shelf onto the floor. I got mad. It almost landed on my foot. Seriously there was no reason for it to fall. I didn’t need annoyance right now. Or did I? The level reminded me of the time your yardstick moved on it’s own towards a forgotten pair of pineapple shorts you had in our closet. Shortly after the strange yardstick situation, I was given a free trip to Hawaii. That certainly is a big cosmic coincidence.

There in the middle of my grief guilt, you nudged a sign that I continue to move forward. I don’t know what’s next but I do know, with each step, I’m moving towards new levels in life… 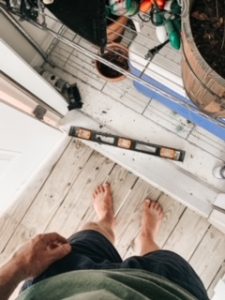 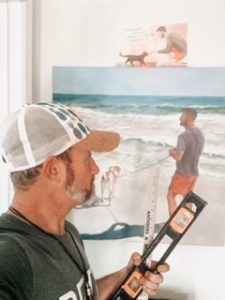 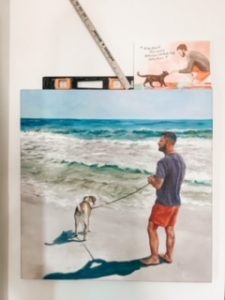