It has been 866 days since Clayton past away, 867 days since I said “I love you” and kissed him on the forehead for the last time. Those first few days after he died felt like years. Every minute was the first of that minute without him. Every day was the first Monday, Tuesday, Wednesday without him. Once the first week was over, the second was easier but it was still the first day back to work, the first May, the first summer, Halloween, my birthday, Thanksgiving, Christmas, no New Year’s kiss, empty Valentine’s without him. Then, suddenly, I found myself only and already at the first anniversary of our goodbye. Back to Day 1 and Grief’s rewinding.

I thought the first year would be the hardest. Finding myself back at Day 1 in Year 2, I was going to be saved from having to fear the arrival of the “firsts”. What I didn’t know was that Year 2 brought the arrival of clarity. The immediate emotional storm of Year 1 subsided, I wasn’t dodging falling birthday branches or trying to stay sheltered from the sting of sideswiping widowed holiday winds. I had made it and thought the worst was behind me. What I didn’t realize was the widowed rewind is like watching a movie again. You notice things that you missed the first time.

That silly poster on the wall, a stranger bumping into the main character foreshadowing a later meeting, the ghostly figure that walks past in the reflection of a window. You miss all of those the first time but you catch them on the rewind. Some bring a laugh and others bring deep fear. Year 2 revealed a lot from the background in the scenes of Year 1. It never dawned on me that part of moving forward also meant having to go backwards and being forced to look at everything again. I thought Year 1 was painful but Year 2 solidified that he was really gone.

I’m 135 days into year 3 and this second rewind has been even harder. I’m seeing deeper into the background now that Clayton isn’t sharing these scenes with me. There are lots of questions and shadowy figures in the distance ahead. I’m catching myself trying to freeze the scene and walk backwards in hopes I can return to the first frame because I’m worried how the credits will read when this movie is over. Does the leading character live happily ever after? Does he succeed in his quest and celebrate? Does he just fade away into the sunset and his story forgotten? The Grief Rewind has brought me to the fear-of-the-future stage in my journey. It’s unsettling. It causes anxiety but I can’t stop the movie from playing. There is no intermission. There is no script for the next scene of my story. Life is improv. All I can do now is walk on set and be me as best I can without Tin to help set the scene… 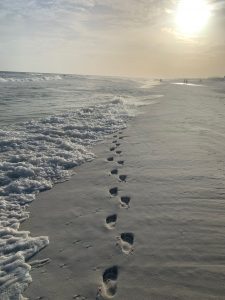