One month away from the third anniversary of Clayton’s passing and some moments it feels like it was just yesterday. Each year has had its challenges and this year I’ve lost our cat Stallone. I’ve written before that it’s the build up to certain dates that’s worse then the actual days themselves. Each season has its sewn in sadness. While others stir with spring’s warm welcome, I watch as life renews and it feels like a taunting. Clayton doesn’t get to come back but the date he died does.

April 16th is always going to hold that feeling. The day my life changed and I had to start walking forward alone again. The reminders are often and unique. Every year taxes are due on my sister’s birthday and my lease is up the following day. I remember being with Clayton on April 15, 2018. He wasn’t making sense with his sentences and was too weak to really stay awake. I knew goodbye was not far away but I just needed him to remember it was Stephanie’s birthday for just a few more hours. It was her day and I just hoped it stayed that way. He smiled, whispered for me to tell her happy birthday and I felt a shift in his energy.

At 3am on April 16, 2018 I woke up suddenly as if someone had rushed in the room. Stallone, our cat, and Roan, our dog, were both standing over me side by side. I knew Tin had moved on but in his passing he gave me my first grief gift. He had waited. April 15th would stay sacred for Stephanie.

Since that day, messages and items have appeared from unexpected places at just the right times. Surprise flowers, cards and one of my most treasured is the painting my beautiful friend Marta made. I have posted about it before. Marta had taken a photo from my Facebook and painted Clayton and Roan on the beach.

This week I began to feel the tension of April 16th’s arrival. A friend of mine came over to have a social night and in the middle of wine, cheese and episodes of The Golden Girls (Clayton’s favorite show) she handed me a thin box and said she had a friend who could draw. Her friend had gone through my Facebook pictures and created Clayton meeting Stallone on the rainbow bridge. Her thoughtfulness and his talent created a physical image for me to see what I held in my heart.

I didn’t know what to say. All I could do was look through the gratitude tears at my new beautiful grief gift… 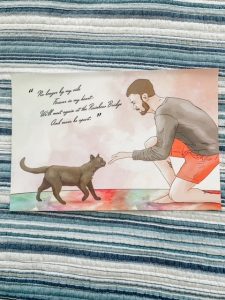 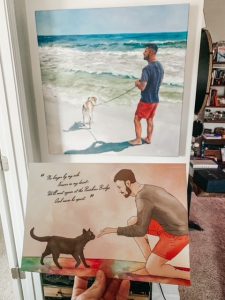