Today is not only Easter Day. It’s also our lovely Megan’s 21st birthday. Her sixth birthday without her father.

Her 16th birthday was just nine days after her dad died. Finding a date for Mike’s funeral in 2017 was so very hard. There is a “minimum” time required between a death and a funeral in “basically western/Christian society” … none of the “bury within 24 hours” stuff.

Mike died on a Saturday. I went, with his sister Helen, to the funeral directors on the Monday morning. Their quickest turnaround was Thursday 13th April, Maundy Thursday. They said that, because of Easter, they wouldn’t do anything on Good Friday (14th April that year), Saturday 15th, Easter Sunday, 16th, or Easter Monday 17th. All public holidays. They could offer Tuesday 18th April, but that would be the day after Megan’s 16th birthday. I wasn’t having that. And of course, she was overdue to be back in school in the UK.

So I chose the 13th April, which was also our Wedding Anniversary. Our 21st wedding anniversary. We were both there. But one of us was in a coffin. It’s tough – very tough – to have a funeral for the man you love on the day that you’d usually be celebrating that event.

Last week, 13th April was on Wednesday. I have a reminder in my diary. Not that need one. I try not to drink during the week when I am on my own, but a day like that needs toasting, so I made some delish fish and had a glass of wine and played some piano. I have the house to myself again as my Ukrainian family has moved into a friend’s empty house further up in the village. I am grateful to have had them here, and I am grateful for a quieter space these difficult weeks, studded as they are with date landmines.

Megan remembered that it was our anniversary and sent me a note. So thoughtful. No-one else seems to remember. Or if they do, they don’t act on the remembering. For those people who had a system of remembering wedding anniversaries (and some people do), I wonder what they do when someone dies? Cross it out?

I still feel married to Mike. I don’t feel divorced, that’s for sure. I still want to celebrate, to honour, to remember, our wedding anniversary. It was a special day and a very special relationship. It snowed a little (so much better than mere rain) and the spring flowers were out. I remember so much of that day. We got married a long way from home, in the Lake District, and made it a 3-day event to make it worthwhile people attending. Of course, we all went for a hill walk together on the final day. Classic Lake District April weather. Chilly and blustery.

Anyway, the point of this piece of writing is not to talk again about the “wrong sort of dates” that come fast and furiously between 20th March and 2nd May. But that, looking at Medjool this weekend, looking at him closely… And looking at myself, equally closely…I realise for the first time that I, that he, that we, look older than Mike. Even the very last photos of Mike that I have – other than those where he was very ill – he looks fresh-faced and youthful.

That now at 55 I realise that I am older than Mike was when he died at 53 is not in doubt. I am not in denial to that extent. But because for so long, for so many decades, when we were both alive, Mike was always the best part of four years older than me, it’s taken a while to absorb that I am now indeed the older one.

I was aware, to the day, when I turned the age he was when he died. I was acutely aware, when I turned 54, that he’d never been 54. And then this year, at 55, I realise that I am so well and truly older. I am older, and I look older. Medjool is older and looks older.

Mike was so shockingly young when he died. Just 53.

And I won’t even mention Julia.

Absurdly young. All of them. It just doesn’t add up. 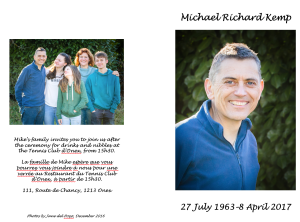