House hunting – It’s been at the forefront of my mind and free time the past two weeks. We all know that the housing market is out of control right now. Some have said that it might not be the best time to buy a place but others say “you know when you know”.

When Clayton passed away, I had to cover all of the bills myself. My overall security was gone. How was I going to grieve and move at the same time? I desperately needed an anchor and, for me, that was staying put. I budgeted everything, denied buying things others have daily and got a second job building a business. I worked my widowed butt off to get back on stable ground and now it’s 4 years in the future. I’m ready for the next chapter in my life.

One after another they weren’t up to standard. Sellers don’t care about quality because they just want quantity. I get it. Selling a house is a business transaction but this is just another example where people see others as just money. I found a house yesterday that checked every box and felt “right”. I put in an offer that was over asking and they came back with wanting even more. Their greed kicked in. I had to say no and I lost the house. So, to be honest, for a little while last night I was the widowed man who worked so hard to get on his feet and build himself up enough to emotionally and financially afford a home but I felt like a failure. I offered more than they asked for only to be told that all I had built wasn’t actually enough.

I know my readers want to help and immediately show support by saying “that just wasn’t the one” or “everything happens for a reason”. I get it but the last thing a widowed person wants to hear after they finally decide to move is that they can’t because there is some “Universal plan”. Best thing to do is acknowledge how hard it is for me to be told “no” when my timeline and my heart screams “yes”. For those of us working through grief, we need to move through it and validation of our experiences is a huge part of our growth.

So this week’s lesson is two fold:

If you are selling a home, do what is best for you but don’t play games because you have no idea who is on the other side making an offer. Be direct, be honest and (most of all) keep in mind that you are impacting the lives of other people. We are more than just profit. Don’t price something to pray on the hope of others.

Secondly, not getting a house doesn’t mean I failed. I’m proud of you for trying Bryan. That in and of itself is a huge hurdle. So you are allowed to honor the stress and struggle you have with the sale but also realize you have broken through yet another bereavement barrier. That house wasn’t good enough for you… 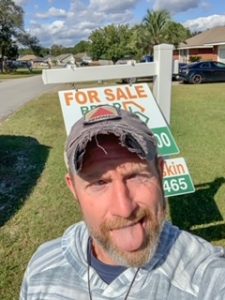