Clayton has been gone for over three years now. A lot has changed. On a day to day, I don’t realize just how far I have traveled. This week has had a lot of old memories stir but not for the worse, for the better. The week brought about events and memories that could have laid me emotionally flat out for days. As the responsibilities built up and shifted, I stayed calm. I had been in a similar spot before with stress and having to keep myself on course. Deadlines and late nights draining my energy reminded me of being Clayton’s caregiver. Eating meals standing up or just too busy to think to eat but I remembered back to the moments I’d be up from 4am until 1am to make sure he had everything he needed. Many things have changed but some stay strongly the same. I still wear the hat Clayton gave me and I’ll keep wearing it until I don’t wear it anymore. I need to do that for myself.

When the dust settled from busy end of season responsibilities, it hit me that I was much further along in widowed time then I realized. Reminding reflections of just how hard each day was three years ago yet here I sit today with a smile. This week’s widowed blog is one that I wrote almost 3 years ago to the day. I want to share it now so that those of you who may need a forward flash of hope can see where I am now verses months after the great grief. It takes a lot of work to start moving down this road alone but along the way life starts to pick up again. The most important thing to remember is that an object in motion stays in motion so always be forever moving forward…

I haven’t written in a couple of weeks. I could say I’ve been busy but really it is because I didn’t feel inspired to write. Writing for me is very specific. I have to feel I need to write to portray an aspect of my life that might help another. I don’t want to just write anything to have something written. There is an emptiness to that method. There was another reason hanging in the shadows and distracting me from being in the moment. I was gearing up for a professional conference that I was going to present at. Was it the presentation? No and yes. The last time I saw all of these people was 2 years ago when Tin was texting me he thought he had the flu. I wish he had gone to the doctor right than but he waited for me to get home. There is unnecessary guilt here, regardless if it is warranted, it is here. Had I only been home, had I only picked a career that didn’t take away valuable time from him. Had I only solved it sooner than he would be here and I wouldn’t be headed to a grief summit.

I knew it was coming. I knew I would see friends and old coworkers that wanted to express their condolences. I knew there would be people who hadn’t heard and would ask how he was and than I’d have to tell them of my loss, which would cause them to feel guilt for asking and I would have guilt for sharing. This was going to be a mountain of emotional experiences. It all came to fruition. Each day was peppered with conversations about how I was holding up. How did I do it? How could I always be so positive? My response was a bit shocking but it was the truth…

“The outside doesn’t always match the inside.”

That caused a variety of responses from silence to people asking me if I needed to seek help and if I was “having bad thoughts”. No. No I am not thinking of joining Tin, The Universe will decide that it is time but your grief goes to such a deep level when someone brings that touchy topic up. Sometimes I feel like a court jester juggling all of these emotions. I guess now I understand the tears of a clown.

I made it through the check-ins but what I didn’t make it through was a simple joke, a side comment meant to jest the jester. It was a comment that would have me laugh at any other time. A simple joke about me being 40 and time was fading to find a husband sent me over the edge. The entire weight of the trip was unbearable. I immediately walked outside, sat on the cement stairs and began to sob. Friends came to my aid realizing that the inside couldn’t be held at bay by the outside. It’s a game of Jekyll and Hyde. As hard as you try, the beast demands attention and freedom.

Once the storm was out of my system, I put my brave face back on and carried on as though the breakdown was just a dream. With the conference over, I piled my stuff in my car and got in the driver’s seat. I took a deep breath and began to sob. This was the first conference I would be heading back to an empty home… 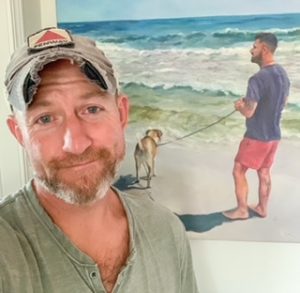