The conversation of letting Clayton’s ashes go came up last week. His uncle was going to drive them up to where Clayton asked to be buried. So after 5 years I handed him over. I had lots of messages of support and messages suggesting ways I could keep some of Clayton’s ashes to hold on to a part of him. What I love about sharing my blog is that it often inspires conversation that helps me dive more into my feelings and why I do what I do as I grow through grief.

It’s interesting how people will show up in various forms depending on the situation at hand. Every time I share about my grieving process there are people who respond back (trying to help) by saying what I SHOULD do verses what I COULD do. Yet they never first ask me what I want or feel I should do. I even had people message how angry they were that his family would take his ashes away from me yet I never once said or implied such a thing was happening. I simply stated that Clayton’s last wish was to be cremated and buried in the family cemetery so he would one day rest there next to his mother. Amazing how emotions and grief within others can take a last man’s wish and turn it into a tornado. Grief can make a mountain out of just a pile of ash.

Yes, I reduced Clayton’s whole being to just a pile of ash because, to me, it is no longer Clayton. He isn’t actually in that urn. I loved him for his spirit not his physical being and the only thing that actually continues on isn’t in that jar. It’s his spirit in my memories.

I fully understand why some people want to keep ashes of anyone they cared about but I think it’s holding on to the past in a way that I don’t think serves me. Having a gift around the house or wearing my favorite old hat he gave me is one thing but to cling to carbon might as well be placing myself in chains.

The other side of this for me is very clear. When Clayton thought he would die before his mother, he told me he wanted to be cremated and scattered at the beach. On his deathbed, I watched Clayton look directly into his mother’s eyes and tell her that he wanted to be cremated and laid to rest with her. His last wish was his gift to her that I will not take away. So I understand all of the sweet messages and amazing suggestions on how I can keep a bit of ash for myself but there is just one thing:

Clayton wanted to be cremated and laid to rest next to his mother. If I take any amount of those ashes to hold him close then I’m not truly and fully honoring his wishes to be fully laid to rest next to his mother. He never said that I get to withhold part of him from her and I won’t choose to do that. They say if you love something let it go. I have with an open heart because I know he’s exactly where he asked to be and that means he is still with me because Clayton is more than just a pile of ash.

This week his mother called and said she would love a photo of me on our paddle board in the ocean holding Clayton’s urn and scattering his ashes in the sea. They both just wanted what they thought the other wanted and I was gifted yet another view of pure love from just a pile of ash… 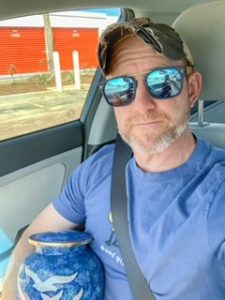