Talking to someone who has lost a loved one isn’t the easiest situation. Many people get anxious, some shut down, some unintentionally say the wrong thing. I try to remember that they are hoping to meet me in a space of support by saying something and when that something comes out wrong (which it inevitably does) I search for the true meaning of their message behind the mishap.

Here are some supportive stumbles said to me:

Feel – “No it doesn’t because I’m never going to not miss him.”

Feel – “Move on? Like I will be over everything and the sun is shining and it never happened kind of thing?”

Say – “You’ll find someone new. Your soul mate is out there.”

Feel – “Hopefully I can love again but he’s going to have to understand he won’t replace Clayton.

There is just one thing someone recently said to me that I’m still trying to work through. I was asked what happened to Clayton and how did he die. I explained that it was 8 months of slowly fading until his body failed him. I know that what this person said in response was meant to compliment me for how I handled helplessly watching Tin slowly pass but their words struck an entirely new string in my heart.

“I don’t think I’d be strong enough to watch someone slowly die. I’d have to walk away.”

There were days that I was exhausted and felt I couldn’t find the energy. There were days that I just wanted his suffering to end but at no time did I think it was too much and I would just walk away to leave Clayton to die without me. I think, well at least I hope, that what my friend really meant (in his message mishap) was just trying to celebrate the strength I found in an unimaginably difficult time in my life. However, if he truly meant what he said than I am here to tell all of you that the loss I feel daily isn’t as bad as the guilt would be had I given up and just walked away.

I was hurt by how my friend’s sentences strung across my heart. I could hold onto that in anger but instead I will view it as a gift. You see, for the first time since Clayton died, I realized what I actually accomplished is something others might have given up on. No matter what waves washed over me, I stood strong. I didn’t give up on Clayton. I didn’t give up on love. I stayed… 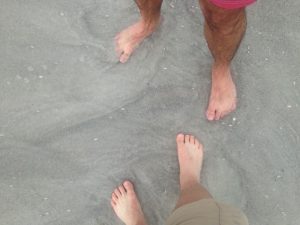