This is my 100th post for Soaring Spirits. Which sounds more monumental than the 104th, due in a few weeks, which will mean that I have been writing here for two years. I know I have not missed one Tuesday. Discipline is good. Habits are good. Who would have known that I had something to say today that is not to do with 100 or almost two years, but instead the endless slew of “secondary losses”?

I have had another big secondary loss. Secondary losses are the endless losses that pile on following the primary loss(es) – (i.e., death). Secondary losses relate to needing to move house, finance changes, slight or major shifts in friends’ dealings with you, minor or dramatic unravelling of one’s address book, witnessing your kids graduate from school then university without their second parent whooping in delight, losing your second driver on long journeys, until your kids are old enough to drive, then realising that asking them to share the driving with you is yet another secondary loss because you wouldn’t still be having holidays with them if your spouse hadn’t died. Etc etc.

As I was out walking my dog in the village two days ago, I came across my GP who, unusually for the time of day, was outside his house. I go to his surgery/offices in the next town when I need to see him for health-care reasons and rarely see him in the village we live in. Turns out he, his wife and daughter are leaving the area imminently (the next day) to go and live in Normandy.

I am so very sad to hear this news. “And when were you planning on telling your patients?”, I asked him. He smiled and said, “Well, I have been telling them for 6 months, but you never need to see me”.

I was speechless. My shoulders slumped and my heart sank. Not just because I like him a lot. Not just because it’s a total and utter pain in the arse to try to now find a new GP, especially around here where living costs are just too high for the public sector-managed salaries they make.

But because he holds the family history. He knew Mike. He knew Julia. We were all with his partner doctor for the many years before Mike died, but the partner doctor also left the area just before Mike died. This new doctor, already with a patient list longer than he should have, took us all on after we had trialled with another doctor for a while. It took the other doctor too long to “get” what had been going on in the family. Edward. Mike. Teenagers. Potential genetic disorders. Explaining it all.  Again.

So when our current doctor agreed to take us on, in part because I promised him we would be low maintenance, it felt like one thing was going my way for a change. Which mattered so very much in those first weeks and months after Mike died. I noticed the space and ease that having him know our context, family history, likely concerns and anxieties, gave me.

When I took Julia to see him for her increasing anxiety, he had something to hang it on straight away. Her eating issues. Her cutting and self-harm. Her depression. Her frozen-ness. Same thing. He knew what was up. He brought Mike into the conversation, not in a blaming way, but with care and love. “I wonder what your dad would be wanting for you, at this time”. He’s no psychotherapist but he has a daughter her age, and he is about Mike’s age, and I am sure any transference and projection was helpful transference and projection.

No need to explain anything. He was able to hold the family history and system. Help contain the pain and not add to it. And now he’s gone.

I now have to find a new GP, and explain to them, if they have time to listen, that once upon a time we were five. And now it’s just me. A heavier and graver me than when we were five.

I will miss him. I wish him and his family well. Though selfishly, I wish he’d have stayed around here, and carried on holding what’s left of my family’s alive members, while also attending to the two big shadows in the background.

And thank you for being so good and generous with us all. 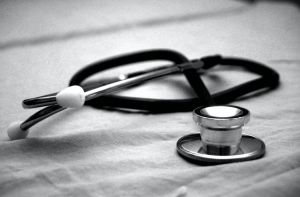 Image by Hush Naidoo on Unsplash