I have always had trouble when I’m told that there is no way out and no solution to things. Apparently, looking back at my writing, that fact holds true even in loss and grief. I didn’t realize at first but it explains my anger when I was hit with the regular “whys?” and the “what nows?” – No answers.

Through life we travel over and through a variety of terrains. I had hit an impasse and the only thing around was a hole in the ground. I looked to the left and right hoping to see a little white rabbit show me the way. Instead, life pushed me from behind and I fell. The shear fear from the death drop and sudden impact of losing Clayton knocked me unconscious. Months had passed and I woke up disoriented with no way to climb up these widowed walls. I felt trapped. So I stopped and asked myself a novel question:

“What if the reason it feels hard is because I am trying to turn around the down?”

I decided to stop sitting at the bottom looking back up with insatiable longing and began to dig down. At first, I thought I’d dig forever but that ditch eventually broke through to a gateway, an epiphany opening leading into consciousness caverns. I was met with a stale warm widowed wind and I realized what was happening. In “The Divine Comedy”, Dante’s journey is of a widowed man guided by a shade named Virgil as he descends through the levels of Hell in hopes to make it to his lost love in Heaven. My understanding of what was happening became clear as I stared into the darkness of the grief gorge. Like Dante, I was about to head through Inferno. Somewhere softly from the down, Virgil was calling to follow.

If you’ve never read Inferno, at the bottom Dante finds not fire but ice holding the most egregious of sinners – the traitors. Here Satan lays frozen and Dante is guided by Virgil to begin climbing down Satan’s chest through a hole in the ice. It is there at true center where Virgil reverses direction and begins to climb up Satan’s leg. Dante becomes disoriented being suspended in two truths. Virgil points out that from the center all ways can become a new ascendance. Like Dante, I had to travel down to the center of icy torment. There I discovered I had damned my own journey by punishing the past. I felt the universe had betrayed me and so froze my future.

As I sat holding creation in contempt, I realized I do not have the right to know the reasons behind my endless “whys”. Answers are not for me to demand. I can’t punish the Universe (and myself) by staying frozen demanding answers. To move forward I have to let go of the need to know. I can only choose my “what now”. So here I am thawing at the true center of loss and, just like Dante, my “upside-down” has become my new “right-side up”… 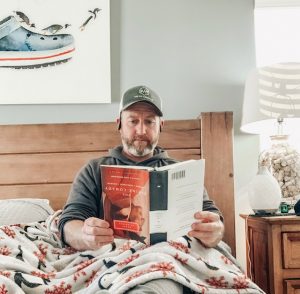