Like everyone’s favorite Justin Timberlake meme, It’s Gonna Be May. Technically, it’s May 2nd but you know what I mean. And if it’s May, then that means I did it. I made it through April. Feels like there is a lot to reflect on over the last 30 days. 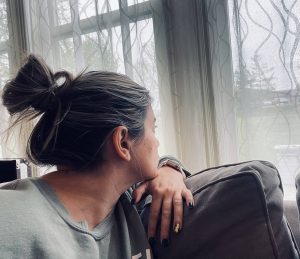 I relived his last days and survived the anniversary of those milestones. So many things packed into one month: Easter, steak night, our son’s birthday, the start of baseball season. Not to mention his death, and his funeral. Even filing taxes was weird, since it was the last time as married filing jointly with him but yet without.

I probably fed the kids too many chicken nuggets and pizza rolls than I should have but we made it through our April together.

I received cards and flowers from coworkers, and texts from friends near and far. My neighbors made sure I wasn’t alone on the hard evenings if I didn’t want to be.

One of the best things I did for myself last month was to get away the weekend after the anniversary of his death. It just so happened that my sorority was hosting a gala to celebrate 100 years on our college campus. So, I packed a ridiculous number of shoes for a weekend and headed to my college town and spent time with old friends.

Specifically, my person, Lisa. She drove 4 hours the day after Tony passed to be here. Leaving her husband and children at home for almost a week. She logged hours at my kitchen table that week, she kept my schedule of events, wrote down what everyone was bringing us, kicked people out of the house when they stayed too late, she washed all my bathroom rugs, made sure I ate, she took my children shopping for funeral clothes, she sat outside the room during our private viewing of Tony so that if and when it became too much for my little ones they had a safe person so sit with. Those are just some of the things she did for me in the first seven days of my after. She has continued to support me through this. Respecting any boundaries I have, and most importantly learning how to help me through my grief without pretending to have any answers.

When we met, we were 18 just starting to find ourselves. Now 20 years later, she is watching me try and find myself again.

Most of the time when we make the 4-hour trip to see each other we do so with our families in tow. So it felt like old times to share a hotel room and wake giggling from our antics the evening before. Even though I am definitely older and maybe wiser now, I still hold that version of myself inside me. The weekend with her and catching up with other old friends helped lighten my burden and remind me of the young woman I was in my twenties.

When I agreed to go, I was worried about it being so close to the anniversary of Tony’s death. However, I knew if I bailed last minute, Lisa would skip the event with me and sit in the hotel room eating Pokey sticks and pizza. I didn’t bail, we still ate Pokey sticks, we danced until our feet hurt and best of all we laughed.

So even though the month was full of hard things, I’m thankful I spent some time on me. I found a way to build some happiness into the month too.

My name is Emily Vielhauer, I am 42 years old and have 3 knuckleheaded sons who are between the ages of 8 and 12. My husband, Tony, and I were married for 14 years and despite how things ended we built something great together.