I knew he was fading away faster and faster. I knew that Tin’s last day was soon but you don’t know until you know. We fit in frozen yogurt, going out to dinner, the beach and visiting the aquarium just one last time. I didn’t know it was the list of lasts. I didn’t know it was my week before widowed.

To say the last week was full of us trying to live life to the fullest would be a Hollywood fairytale. That last week was one of the hardest. Clayton was fiercely independent and hated being told what to do but his condition was doing just that. He couldn’t move much on his own. Before getting sick, Clayton would spend every night taking a bath in the guest bathroom. I would sit down next to him and talk. There he was, my handsome future husband asking me about my day not realizing I was in awe of him, so strong and so sensitive at the same time. Then I blinked and we were in the last week. All he wanted was a bath. So I held him up as he walked, undressed him and stood behind him in the tub to lower him. Warm water from the faucet and from my eyes filled the space around him. There I sat in awe of my handsome, soon to be late, husband as he asked me about my day.

Two days before Clayton died, we went to see the animals at the Gulfarium one last time. We went to eat at a local restaurant he loved, The Gulf, one last time. As we sat and ate, I noticed his appetite wasn’t what it normally was. I knew he felt weak and I knew he was hiding it to save me. His illness was telling him no more food and it was getting him frustrated. Before we left he needed to go to the bathroom and he couldn’t lift himself out of the wheelchair. I helped him up, set his clothes and lowered him down. I could see the frustration in his face through the tears in my eyes as I watched him sigh in defeat. I looked at him in awe, my brave dying partner.

He wanted to visit our apartment that night but it was getting late. We said we would make the trip up the three flights of stairs tomorrow. He sat relaxed in the passenger seat and held my hand.

Tomorrow arrived but Clayton didn’t have the energy. I went over to his mother’s to be with him. He could barely open his eyes or breathe and I sat looking for the last time, in awe, of my handsome fading partner. I didn’t know that this was our last sit. There was no way to know that this was the end of my week before widowed.

For some, it’s the anniversary day while others have trouble with holidays or birthdays. My week leading up to Clayton’s death anniversary hits harder than any other. The guest bathtub waits dry and the passenger seat of the car is empty. Memories are marked in places and travel forward to the present time. They bring him back to life in those spaces right before my eyes. All around, people walk by. He looks at me knowing that only I can see him and for a moment we sit. Tears fill my eyes as I look in awe at my beautiful passed partner. My grief ghost always visits the week before widowed… 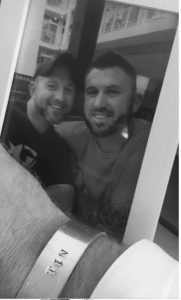