Six years ago, Clayton and I took a trip to visit his mother. We were still in Atlanta and she was living along the coast of southern Florida. We had left the city cement behind for a walk along the waves. What I hadn’t realized was the subtle but profound stop we took along the way. As soon as we parked the car, Clayton got out, threw his shoes and stepped on the lush green grass. He loved to be barefoot and outside but I had never seen a grown man instantly become his inner child. Pure joy, innocence and fully present in time. All I could do was laugh and breathe in the energy. That memory planted deep inside me by the glimmer in his eyes and his soulful smile pouring over those soft summer blades. He was glad to be in the grass.

Ironically, just 2 years later, Clayton would be helping his mother landscape at her new home. It was there that he picked up an aggressive ringworm infection that went systemic and the antifungal medications hit his liver hard. When Clayton passed away, I felt grief’s fog surround me and I started to just drift. I floated day-to-day only feeling what was inside, forgetting what I could feel around me. As the time passed and his death became actual to me, I began to avoid having moments from memories. I refused to walk outside barefoot because I knew that there would be grief in the grass.

It’s been three and a half years and I have traveled a long way but I have not stopped to stand in the grass. I’ve learned that part of moving forward means I have to walk through the weeds. I’ve also learned that there is a big marsh of misery that is very easy to commiserate in. I can’t allow myself to get stuck in the swamp so I kept moving. When most people feel uncomfortable they go with one of three options:

Run from it, ignore it or fight it.

I’d like to give you a fourth option – What if you say thank you?

What if, just what if, when you feel uncomfortable you say thank you? Not because of the grief but because whatever it is or was just showed you where next to grow?

The more I share about where I’m at, the more I realize how much others need to hear or read exactly what they are thinking. My grief comes from the loss of my father and the loss of Clayton but there are commonalities in grief regardless of the road. I write keeping in mind others may be in the same weeds. So this week I intentionally did something uncomfortable – I took my shoes off and I stood in the grass. At first, all I felt was my emotions rushing up. The hard truth that he was gone and I wasn’t going to get another chance to see Clayton stand in gratitude. I asked “Clayton is the grass really greener over there?” I let out a sigh so the breeze could take it away and I just stood there. I began to notice the feeling of the grass on my feet and the warm sun on my shoulders. I heard birds and I found myself smiling. I forgot how much I loved standing in the grass and there it was again – another one of grief’s gifts. I don’t think I would have ever connected with that moment this week had Clayton not given me that memory.

So this week I just want to share that it’s not “your grief” or ‘my grief” it is “our grief” and together we can keep moving forward. In the end, it doesn’t matter how you got to your grief, at the end we all walk through the same “gates”. Until then, I’ll stop taking the grass for granted… 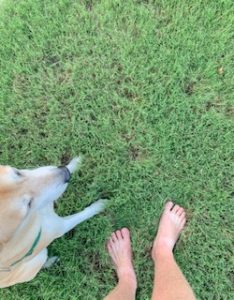 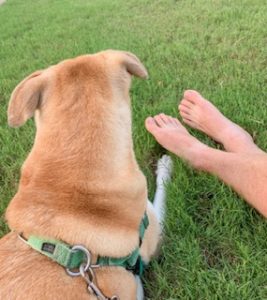