“I honestly wished he was dead!” she said again with deep conviction.

The words felt like bullets. I gasped, put my hand on my heart and put my head down. A couple was speaking on stage at an event, sharing their journey through his substance abuse and how it had almost tore the family apart. They were raw, open, honest with their struggles and their road to where they were today. Up until her declaration, I found such deep beauty in the commitment they had toward their relationship.

I had to go. I had to get out. I couldn’t stop the tears. I couldn’t hold in the ball of hurt, sadness, pain and anguish rising in my throat. I was gagging on my grief. Why did she have to say that wish?

I found a stairwell and just sat. There was nowhere to hide and I didn’t care. The entire room had heard me share my story about losing Tin and what the loss of your person causes us. Often I’ll manage my grief in private but I was done guarding everyone else against the involuntary insult of my visible emotions. Yes there is sometimes guilt in openly grieving. I don’t like upsetting people so if they see me upset I actually feel worse. It’s a tough balance some days but not today.

I let the emotions come and walked through my feelings. My eyes burned, my hands felt cold and my heart ached. Standing in the middle of the fire, there I met Anger. He has been fairly silent about our loss. I knew he would come. I didn’t know when or where but I prepared myself. Instead of embracing his arrival, I stopped and asked him a question.

“Hello Anger. We haven’t spoken much and I know that’s not ok. You’ve been through a lot. Tell me, my friend, what caused you to wake?”

“Anger.” I said. “She didn’t mean it. She is sharing her struggles to try and help everyone out and her truth is her story. Her intent is good. You’re not mad at her. You are mad that you lost Clayton and that is ok but don’t be angry with her. She is just sharing the emotions from her trials and that does not negate yours.”

We both felt a change in pressure and took a unified sigh. I felt Anger’s fire weaken, smolder and begin to smoke.

“Because she doesn’t know what it’s like to be gravely grateful. Anger, she can only sympathize with us and I don’t think we ever want to wish for someone to experience widowed empathy right?”

“No. I wouldn’t wish that on anyone.”

It was hard to see him now. The smoke had filled the space between us. His voice had weakened. His shape changed as Anger took a seat on the floor of my mind. The calming brought a cool breeze that took the smoke with it and there, where Anger had stood, sat Sadness. I walked over to him. I looked into his deep blue eyes and just held him… 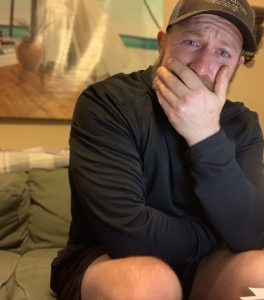