Almost three years ago, I flew home from a convention in Mexico. We had to fly around Hurricane Nate. I got home. Clayton and I prepped the apartment and planned to go to his mother’s house. He wasn’t feeling well and I wanted to take him to the hospital but he said we should wait until after the hurricane. Nate passed and 8 months later so did Clayton.

This week, Hurricane Sally was supposed to miss this area but decided to stop and visit. I was as ready as I could be but you’re never quite ready. Flooding, delays, loss of power – I can handle all of it. I’m good in tense situations and wasn’t anxious, that is until I saw my extra set of keys on the counter. My friends that watch my animals had given my keys back so I had them available for visiting relatives. I forgot I had them. Now I had to go to work to help but I wasn’t sure what the storm was going to do. Would my dog and cat be ok? Would my apartment be ok? Would I be able to get back home?

“I should have more keys to people. Damn it Bryan. Why didn’t you think?”

None of my family live nearby. None of my neighbors answered their doors. Clayton wasn’t here for me and I instantly felt completely alone and scared. What do I do? How do I manage this? Why do I have to go through this hurt during a hurricane?

I sat down and just stopped for a minute. Wind was whipping outside and matched the swirling emotions and thoughts I had inside me. I took a deep breath and had to put faith that this would all safely pass.

“You’ve been through worse Bryan. You’ll figure it out.”

My coworker was headed to pick me up in his truck so we could get through the flooding. My best hope is that we could make it over to my friends’ and get my keys to them just in case. As luck would have it, the roads there were clear, keys dropped off and we made it into work. The storm continued to wrap itself around us and I held on to the goals in front of me.

“Everything at home will be fine. You aren’t losing more today. Get your work done.”

I kept my focus on the tasks at hand and boxed up my stress, fear and emotions.

“I’ll just unbox those sometime later.” I told myself.

Sally kept moving and eventually passed. Things were calm enough that my friend was able to go check on my place and take Roan on a walk. I was so grateful for not losing phone service because a simple text alleviated a storm surge of worry. We finished the day at work and I headed home. It took a few hours but the things I packed up and put away for later unpacked them selves without warning.

Standing in the kitchen, I recalled the moment I realized I had my extra set of keys. I began to shake. The rising tide of tears broke through the barriers. I sat down on the floor holding Roan and the loss of Clayton flooded over me. I withstood the hurricane but it was the widowed weather that knocked me to ground… 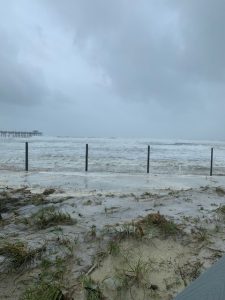