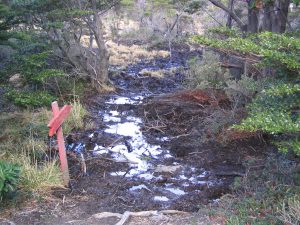 Mike and Sarah share Sunday posts, as they are two widows who are in a new relationship together.
Today’s post is from Mike:

It’s mud season already here in Ohio.  Waves of cold come through, freezing the ground, and everything surrounding it.  A few days later, the sun begins to shine, and it begins to feel like a spring day, with the drawback that all of that frozen ground turns to muck.  The cycle continues like this for months.

It seems as if this cycle begins earlier every year, and lasts longer.  Trudging through the winter, I can’t wait for the weather to break, and when it finally does, I am somehow, after 39 years, still surprised and disappointed that the end of winter actually means the beginning of mud season.

In the five years Megan has been gone, mud season signifies a lull.  A quagmire for my memories.

If I really wanted to conjure up thoughts of Megan, it’s as easy as listening to “Let it Be” by the Beatles and crying.  It’s not that I ignore any memories of her, it’s more that, after Shelby’s birthday in mid-February, I am ready for the winter flurries of memories to be over.  October brings halloween, her favorite “holiday”. November is her death anniversary and thanksgiving. December holds the day we met, the day I proposed, and of course, the granddaddy of triggering events, Christmas morning.  New Year’s Day isn’t great, and a few days later is the date of her lung transplant; also known as her “new birthday” when she was alive.

But finally, almost mercifully, “winter” breaks, March arrives, and I get a reprieve until Mother’s day.  No anniversaries. No birthdays, significant dates, or even those stupid “on this day” pictures that facebook likes th throw in your face at random, sending you into a tailspin.  I get well over two months of breathing room, with seemingly all the time in the world to process things before summer arrives, with anniversaries and birthdays portending the oncoming arrival of fall.

But I’m always surprised by the mud that forms this time of year.  I have to watch my steps, and take care to wipe my feet thoroughly when I enter into what should be a calm and cozy home.  This is when those unsuspected triggers blindside me. When I take one “wrong” step, and suddenly, my boot is sucked off, I stumble into the muck, and ruin my socks.  When I would almost rather be back in winter, since at least the ground is set hard and fast, and I know where the icy patches form.

The quagmire is formed by songs playing randomly on the radio.  By the continuation of everybody else’s lives, when they’re having children that Megan never got to hold, or Shelby is learning a new thing that she never got to tell Megan about.  Even a random advancement in the treatment of Cystic Fibrosis being detailed on the news is enough to piss me off and/or depress me, reminding me that sometimes life moves too slowly for everyone to take advantage of it.

I’ve grown to become more on guard, more aware that muddy patches will always exist, no matter the time of year, but they are more frequent when you least expect them.  Sunshine and mild temperatures don’t mean that the worst is over…they simply mean that the weather that will floor you comes from the ground up.