So many things have triggered my grief. It all comes down to five senses. There are the predictable ones that stand out like catching the scent of his cologne lingering in the breeze from a man passing by or the lyrics of a song that strike the strings of my heart. The taste of his favorite food the first time I had the courage to actually eat it again. I’ve been able to manage some of the triggers. I’ve packed away all of Clayton’s cologne. They are there if I want to smell him again but I don’t need them to be the first thing and last thing I see each day next to my toothbrush. I can change the channel if the wrong song comes on at the wrong time or I can turn the volume up and let the words wash over me.

I expected those kinds of typical triggers but it’s sensing the surprise ones that you’d never think of until they happen. Going through my phone and hearing his old voice messages. That startling feeling when a friend took my hand for the first time and every part of me wanted to squeeze and hope it was Tin’s. The different feeling my bed has when I wake up without him there stealing the sheets or the quiet of the house lacking his voice, lacking his goofy big footsteps. Not the first ones you think of but understandable. However, there is one sense that has struck me so deep because I never thought it would ever happen – seeing him in person again through Grief’s Gaze.

I don’t mean in photos, dreams, videos or mind drifting memories. I mean for a split second thinking he’s actually right there in front of me alive and looking back. It never occurred to me that I would ever see someone who resembled Tin so much that I would do a double take. A typical morning workout before work with the same people nodding “good job for getting up and getting to the gym.” I set my towel on a machine and scanned the scene. Same height and skin tone, same kind of hat, same arms, same legs, same stance and tattooed spots. His shirt hung the same and his mannerisms from the back were almost identical. He turned around and began to walk towards me. My stomach dropped. Same walk, same eyes, same smile, same age. Not an exact match, but close enough when you’re gazing through grief. He nodded as he passed. I smiled back then quickly looked away and fiddled with the weights.

“It’s like he’s right here but doesn’t know me. What a confusing feeling. Deep breath Bryan.”

So many new thoughts ran through my mind. I could and couldn’t look at him. Do you know what it’s like to want to cry and smile at the same time. Did you even know you could simultaneously have contradicting emotions cloud your conscience? His goofy lanky walk made me remember Tin’s awkwardness. His big shoes reminded me that Tin’s feet were like paddles. I’d joke they were the reason he was such a good swimmer. This familiar stranger’s height and long arms caused me to fight back tears. Clayton would always stand behind me and put those arms around me. One around my waist and one over my shoulder with his hand resting on my heart. Grief’s gaze brings back the deepest desire we widowed can never sense again, holding our beloved just one more time.

Grief and loss cause a lot of emotions and a lot of unique thoughts. It’s not crazy. You’re not crazy. I’m not crazy. We just deeply miss and want so terribly to have that sense of touch again. I don’t know this guy and I’d certainly never ask him but in that moment deep down I heard my inner voice say:

“Hey. I know we don’t know each other but could I ask you a favor? Could you just hold me for a minute? Just one minute so I can close my eyes and pretend that I can have the one thing I can’t ever sense again.” 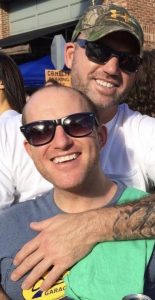