I am just back from a week’s late summer holiday in Montenegro with Medjool. It should have been an “organised holiday”, with daily longish-distance swimming in the “fjords”, lakes, rivers and sea in and around Montenegro with SwimTrek. But Montenegro recently made it on to the UK’s Red List of COVID countries. And being a UK-based organisation with primarily a UK-based clientele, SwimTrek chose to cancel the trip as people pulled out because of testing and quarantining requirements once home.

I thought we might explore parts of the country that I hadn’t really visited, back in 2017 (which would have been easy, had we spent most of our time lying horizontally, face down, immersed in lakes and rivers), but it’s a small country – less than half the size of Belgium, and since the longish-distance swimming was off the cards, we were quickly bouncing into places I had visited with Ben, Megan and Julia.

Memories and places came flooding back, unbidden, unsolicited. Seemingly forgotten places and memories, even though it was only four years ago. Places we had visited. Places we had had lunch or dinner. Places we bought petrol or did some food shopping.

Memories of Julia and Megan choosing to stay behind with the wifi and aircon of the AirBnb, and only Ben joining me for a trip to Kotor. Or even all of them staying behind in our Zabljak AirBnb, in the glorious mountainous Durmitor region, while I went off to scale the second highest mountain in the country.

But Montenegro is too small not to have a million “déjà vus” on a second visit. Once we had spent a few days in the Kotor Bay region (complete with a few swims as initially planned with SwimTrek, I suggested to Medjool that we spend the rest of our week in Ulcinj, in the south of the country, next to the Albanian border. In 2017 it had seemed interesting, but we didn’t have time for a proper visit, and in my recollections, we hadn’t ventured there.

But as we arrived in Ulcinj, and swerved through traffic in hot pursuit of Emro and his vespa, so that we might find his small wooden cabin in the nearby olive groves where we would spend a few days, yet another “déjà vu” came hurtling into my conscience. “I know this place. I have been here before”.

And indeed I had. We hadn’t stayed in Ulcinj in 2017. We hadn’t even visited the town. But we had driven through the top of it, that time also weaving in and out of chaotic traffic on narrow roads, with cars parked apparently randomly – some alongside the pavement, some across it, some well away from it.

It all came flooding back as I saw the ancient olive trees. Eventually I remembered (and much aided by photos on my laptop) that we had made a day-trip to visit the olive trees that grow there (average age 800 years, with one assessed at being over 1,315 years old). That we had bought olive oil made from the olives to take home. 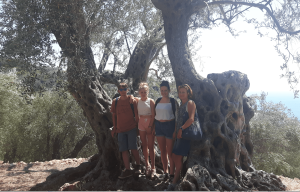 On this trip too, we visited Skadar lake which reaches well into Montenegro and Albania, and which I had also visited with the kids. We had been on a ½ day boat trip last time. I have stunning photos from that day. It was beautiful. Julia looked happy and interested. She played at being Kate Winslett from Titanic. 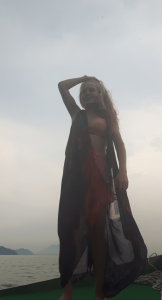 Medjool wanted to visit Skadar too, and queasy as it made me feel, it seemed trite to say, “No you can’t because I will get too triggered”. Clearly we had to have a different type of day – and so we visited a much smaller part of the lake, paddling a double kayak under our own muscle power. We also swam in the lake, and visited a deserted bit of shoreline to eat our lunch.

Different experiences in a same place, in a life so vastly different to the one I had just a few years ago. How could I have forgotten so much? It was only four years ago.

Realising that I had forgotten that I had already been to Ulcinj, I had to find new things for us to do. Fortunately there is much to see and do, and Ulcinj has some of the most beautiful beaches in the country, and its old town, complete with citadel, is 2,500 years old. I am not a very beachy person, even if I love to swim in the sea. And I am most definitely not a beachy person in the height of summer, which is when I visited Montenegro with the kids. But in late September/early October, I can spend a few hours on a deserted beach. I can happily swim from one end of the bay to the other, dragging my fluorescent yellow buoy for visibility and safety. I can eat fresh, local fish twice a day in small restaurants. I can enjoy tomatoes, olives and feta for breakfast in the shade of the olive grove. 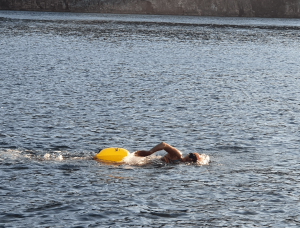 I can have quite a lovely holiday even if there are difficult memories pouncing out at me on a regular basis.

And still it’s not easy. Some of it is downright hard. Queasy-making. Stirring. Triggering.

On the flight home, Medjool spoke some lovely words. They were so lovely that I asked him if he would be willing to repeat them while I recorded them. In a mix of English and French, our “langue véhiculaire”, he said:

I have come to realise…

Being in such a loving relationship with you

I realise how much courage, trust and hope it takes to love again

I realise that if I were to lose you now, or in five or ten years, the memory of our relationship would be so strong

How could I engage in a new loving relationship again, without missing you so much that I wished I were with you, wanting to still be in the relationship I had with you?

Being able to love again, to live life again, fully and completely, while keeping your memory alive

That you live with such hope, that you want to love again

And how confusing it must be sometimes

How messy and complex it must be to hold the memories you have of Mike and what you had together, while at the same time enjoying the present with me

It takes Courage, Trust and Hope. These are some of my superpowers. Along with Gratitude, Love and Optimism.

Enjoyable assets for enjoying life when things are at their best.

And vital resources for survival when things are at their worst.

I am indeed so very grateful for all that I have today. And also, despite all the pain, for all I have had that I have since lost.

When there were still three, just after Mike’s death