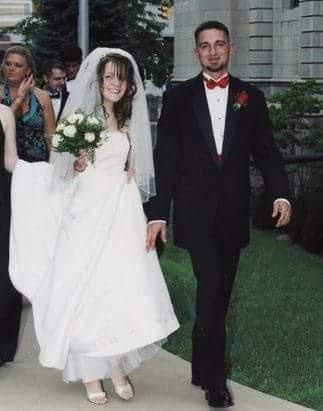 Yesterday would have been Megan and I’s thirteenth wedding anniversary.  It has been the fourth since she died. We didn’t quite make it to a decade together as husband and wife, but we at least got to have the experience of buying our own home and becoming parents.  We got to have a formal wedding, with a service in a church and a catered reception in a rented hall. For all intents and purposes, our marriage and life together thereafter was “normal”, save for, you know, the whole long-term illness and death thing.

But I digress.  Again, it’s been four years since she died.  I’ve had a bit of time now to observe how this very specific date will occur each year, and I’ve noticed a trend…

…none of those who were our wedding guests cares about this date.

Her Facebook page, which is “memorialized”, doesn’t remind them anymore.  She, quite obviously, can’t post anything about it either. I prefer to keep mum on our anniversary as well…it’s not a day that’s significant to anyone else but those of us that live in our home.  I don’t go out seeking attention or acknowledgment of Megan and I’s anniversary any more than I would have if she was still alive.

Yet still, it was an important date to Megan.  I would have assumed that it would be mentioned, even in passing, by one of our family or friends.

As life has moved forward though, for all of us, new children have been born.  Families have grown to the point that there are almost as many people who had never met Megan as there are those that knew her personally.  Her brother, as I’ve written before, died 4 days before our wedding. Her nephew just turned one year old a few days ago. Her birthday is July 24th…less than two weeks prior to our anniversary.  There are so many significant dates in this small stretch of time that it’s only natural that one of them gets forgotten.

But I haven’t forgotten it.  I wasn’t a ball of snot and tears yesterday, but still, it’s a somber day for me.  Our anniversary is arguably the worst date of any given year, because I don’t share it with anyone else.  On August 6th, I wake up knowing that it’s August 6th, rather than just a random Monday. I often wonder if anyone else even has the inkling of the thought of what day it is, save for Sarah, who, while she wasn’t exactly present for our wedding and marriage, completely realizes the significance of this date to me.  (She was, in fact, the only person to acknowledge it yesterday, composing a wonderful, heartfelt post on Facebook, and was simply “there” for me if needed)

You see, our anniversary was not set as an involuntary date.  It wasn’t her birthday, transplant date, or death date. August 6th was a date that she and I alone CHOSE to vow to spend the rest of (one of our) lives together.  That particular fact is what makes it much, much more important to me, and seemingly less important to others.

The first anniversary after her death was similar.  Nobody really acknowledged it. As such, I was frankly, pissed.  How dare you forget this most important date? How hurtful and insensitive are you that you can’t even give me a “how are you?” when you KNOW this day completely sucks for me?  I guess I don’t get to choose which events are the important ones to remember…it’s her birthday, and I have no choice but to be the “most sad” on that day.

After what would have been our 10th anniversary though, my thinking shifted.  I realized that Megan and I’s anniversary is ours and ours alone. Nobody else GETS to share in that date with us.  I am privileged enough to be the man she chose to spend her remaining days with. Fate did not set August 6th, 2005 as the moment in time that occurred…choice did.  Love did. Our hearts set that date, and nobody else got any say in it. For others to forget or leave the day unacknowledged is an honor, actually. It’s an extra day per year where I, personally, get to remember that I vowed to love Megan for richer or poorer, in sickness and in health, until death did us part, and she returned the vow.  We kept our promise to each other.

No friends or family got that level of commitment from Megan’s heart.  She chose me. That is something that I am beyond proud of. While I will always be in a funk on the date of our anniversary every year, I will also get to be the only person that she can affect on that particular date.  Megan gets to have my heart and mind for an entire day, and no one else’s.