Some may love going out to eat alone but for me it is emotional. Even waiting for takeout can be tough. Grabbing dinner this week, I sat at the bar and got an awkward look from one group. I’m sure it was nothing but that doesn’t mean my feelings weren’t valid. Whatever it was that they were thinking about me was their reality and it made me feel very uneasy.

Ever see that guy having dinner by himself and wondering why he’s alone? Where’s his family? Doesn’t he have any friends? Maybe he’s crazy? I feel bad for him…

When I was younger, those are the things I would think seeing someone alone. It’s always pointed out in conversation and depicted as negative on tv and in the movies. I certainly didn’t realize when I was younger that I was looking into my own future. My perspective of the scene created a perception that went from feeling sad for the guy to thinking that maybe there was something wrong with him or that he might do something wrong. I had no reference for my stream of thought except what I learned – Alone means something is wrong with someone.

We are taught at a very young age the golden rule of being a good person. Treat others as you would want to be treated. Don’t judge. Walk a mile in their shoes. Give the benefit of the doubt. However, if you are unsure, fill in the gaps with whatever truth suits your opinion and your perspective because ultimately it’s up to the other person to change your perception of them.

So now, when I’m out at a restaurant by myself, I’m the guy at the end of the bar that, by default, has something wrong with him. All those patrons have no idea that I work two jobs just to feel safe. They also work two jobs, it’s just masked as a relationship with someone else who brings in additional income – future security in a spouse and kids. You’ll have people to help you later in life. Sounds a bit cold but it is biology at the root of it all and easier for society to accept.

Even just meeting new people can go south fast. A few week’s ago another guy sat at the bar and started to talk with me while we waited. He asked if I was married, probably just to share something in common in conversation. I told him briefly about Clayton. I could very much sense him feeling uncomfortable as he focused more on his phone. So I stopped sharing and kept to myself. No chance to even change his perception. He didn’t want to talk to the weird widowed gay.

What people don’t understand is, all the little things they have in everyday life many of us widowed have lost. As I sit and wait for my food, I overhear conversations about the wife, the husband, about the kids, what to do about replacing the hot water heater, complaining about the in-laws coming for the holidays, weekend plans free from a second job. I don’t have any of that filler stuff in my life and the pandemic has added a whole new layer of complication many don’t even think to consider. I’m the guy at the end of the bar everyone should avoid just in case. They don’t know the strength it takes to do “normal” things like sitting in a restaurant. They don’t know I write a blog to help others feel less alone. They don’t know what I’ve done to create spaces for others to feel welcomed and included. None of that counts. How ironic that the guy who seeks to build inclusion feels so passively excluded so often.

Some may tell me that I have the wrong perception but the fact is that this is my widowed reality. Others would say “who cares about their opinions” but the burden of other’ perception is on me. I guess I’ll just stick to delivery from now on. It’s just easier… 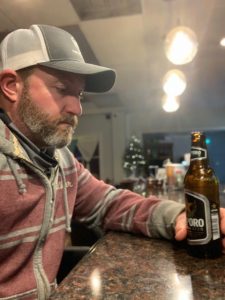