Main image by Leslie Cross on Unsplash. Other pictures my own.

Last weekend, Medjool and I went to the Valais to enjoy a late summer weekend of mountain walking. The hotel and two nights’ accommodation had been generously booked and paid for by him months – possibly even a year – ago. Innocently and caringly selected as a place that he knew of, in an area that he knew fairly well.

When he told me about having booked the place, I recognised the name and location instantly. It was where Mike and I had stayed, along with the three kids and family friend Kiki, back in 2014, when we all walked around the Mont Blanc – the GR TMB, or Tour du Mont Blanc. We spent two luxurious nights there, even though we were just two days into the 9-day walk. A very special treat, because most of the accommodation on the TMB was in multi-person dormitories in Refuges and Gîtes d’Etapes. Here, Mike and I had a comfy room just for the two of us, and the four kids were all together in proper beds with sheets and duvets in another bedroom.

I had been slightly anxious about going back there with Medjool, knowing that it would be full of memories, from the hotel to the restaurant to the mountains around. But I also knew that we were likely to be doing different things. Back in 2014, on the rest day, Mike had accompanied the kids down to Champex-Lac where they’d swum and relaxed, and no doubt eaten ice-cream. I’d had energy to spare, and had gone on a trail run up to the Fenêtre d’Arpette – gently running and walking a considerable distance. I assumed that this 2022 weekend with Medjool, we’d do different things, and that I’d lay down new memories.

We woke on the Saturday morning to fresh snow – the first of the season – barely mid-September and not even officially Autumn – and our choice of walks felt limited. We found ourselves heading up to the Fenêtre d’Arpette, walking shoes in snow the entire time. We picked our way gingerly among slippery rocks. It was stunningly beautiful because the sun had come out. It was crisp and fresh, with a wintery, more than autumnal, feel in the air.

Despite walking for a couple of hours, we were still nowhere near the col, over 1,000m above our starting point. Had I really done such a long trail-run on a “rest” day? Yup.

There came a point in the walk where we felt we should turn back. We were not properly equipped for the snow. We hadn’t organised a picnic, having figured we would find a still-open mountain refuge or café, and I like to have food reserves when I am doing exercise/sport. It was disappointing to turn back, and it was disappointing to not re-accomplish what I had done 8 years prior. It was also mildly disconcerting to me that I felt I wasn’t laying down new mountain memories. 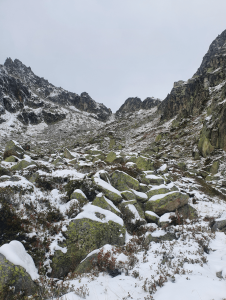 Fenetre d’Arpette still a long way above us

The next day was a similar story. We had no new fresh snow, and the lower down snow had melted a little, and so we got to go higher. We opted to go to the Cabane d’Orny, at over 2,800 m, but were aided for the first part by a chairlift. Again, a memory-filled destination, because on that third day of TMB walking, back in 2014, I had gone with Ben and Kiki (both aged 15 at the time) on an “alternate” and tougher route to our next stop, La Fouly, whereas Mike had taken Megan and Julia on the traditional and slightly easier, lower route. We were going to meet up in the evening.

It was such a memorable day – it had been tough, but Ben and Kiki were good walkers. We’d got through our packed lunch early, and it was cold and fairly misty by the time we got to the Cabane d’Orny. We warmed up there and enjoyed a second lunch, which became a frequent pattern on future walking days.

But last weekend, with Medjool, again we didn’t make it to the destination. We’d simply taken too much time over breakfast and left too late to do what we wanted to do, and still allow for the complex and time-consuming journey home on public transport. We were probably about 20 mins short, but had to turn back. (Good mountain skills – to know when to turn back). 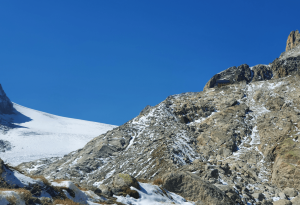 I felt crushed. I felt cross. I felt betrayed. I felt like a two year-old having a temper tantrum. How could there be “nothing new” in terms of walks this weekend? How could I/we fail to do what I’d done years prior.

And, more importantly, why was this making me so very angry?

The next day, “back in the office”, I had a conversation with a mentor/teacher. We made some chit chat about the weekend just gone, and I told her how triggered I had been. How hard I had found it to go back to a place I’d been with Mike and the kids – such a different time, context, people, purpose.

She listened, then gently and wisely said, “My experience is that the first time back anywhere after a loss is particularly rough. So very hard. But there are other places that you end up going to more frequently. And even if wholly tied up with the person or people you have lost – somehow it gets softer”.

Her words felt true. A whole and real truth.

I live in the house that Mike and Julia lived in. I can cope with that.

I regularly walk past the spot where Julia took her life. It is hard, but no longer so painful. I always pause and reflect. I sometimes take a photo. I don’t often cry there, now, three years later.

I regularly walk past the spot where we scattered both of their ashes. Also okay.

I swim at the pool two or three times a week where I took Julia for years for her swimming and synchronised swimming sessions. Better than okay.

But the first time for each place had been horrendous. So yes – the Grief Grooves soften, erode somewhat – not with time, but with repeated visits.

Today I went on a long-for-me run. Some weeks ago, I enrolled for a 20km event that will be held a few weeks from now, and I figured I’d better see if I could still run. It’s been a while.

I chose to go up to a special place in the Jura. It’s where I go for my long runs. A rare piece of flat-ish mountain road that goes on for as long as I want – even longer than I want. Before I start, I work out how long I want to run for, and at 50% of the intended time, I turn back. I am such a steady runner that my first half and second half take pretty much exactly the same time.

Well into the return, heading back to my car, on a long uphill stretch, I realised I was running in “that exact spot” that I associate with the first sign of anything being wrong with Mike. Not that we had realised at the time.

We were both training for the Lausanne semi-marathon in 2016, out on a 90 min or so run, and on that uphill stretch, Mike had stopped running to walk. I caught him up and got ahead of him. Unheard of, that I would be faster than him. Unheard of, that I would overtake him. He said he felt tired, and as the path flattened out, he started to run again, caught me up and went on gently in front. As normal.

But later, weeks later when Mike’s diagnosis became known, I connected some dots and realised that that had been the first sign, for me at least, that anything had been amiss. I’d overtaken him on that uphill stretch.

Most years since Mike died, I have done the Lausanne semi-marathon. In his honour. In honour of us. (Except in 2020 when Covid was still full on). It was the time of year (end of October) when we celebrated our “official getting together”. Since I am no longer a regular runner (Medjool doesn’t run), I don’t get up to my forest path as often.  But it is where I instinctively head when I want to do a long, extendable run, in preparation for an event.

Every time I have gone back there, invariably at this time of year, and I have found myself running up that long rise where I inexplicably overtook Mike, I’ve had to stop. And I have invariably cried and sobbed with the pain of the memories. It’s a long forest path, and it’s just a particular section. Recognisable because it’s really uphill. I eventually start walking, then carry on running once I am past the rough grooves in my memory.

Today though, it was smoother. Gentler. Kinder. Softer. The Grief Grooves not so choppy. Less rough. Less jagged.

It feels as though perhaps Grief can transform. Yes – there will always be harsh and violent times and memories – perhaps in particular all “second firsts”. But by the time the “second firsts” become “fiftieth firsts”, some erosion, some softening has occurred.

That – yes – while the Grief and sadness is still and always there, there’s a gentle well-worn-ness to the pain.