Four hundred and eight days after Tony died, we finally mowed the lawn ourselves.

With Memorial Day last weekend, we were out of town as were my neighbors who’ve been mowing our grass for us. Last summer, I didn’t even pretend like I wanted us to take that task on. I didn’t pull the mower out or attempt to start it. At the end of the summer last year, I gave the couple a gift card to go out and spend some time together as a thank you. He was taking time away from his family to help mine out and I wanted to show gratitude.

I have never in my life mowed the grass. Growing up this was a task my dad and brother took on, then it was always something Tony did after we moved in together.

This year as winter started turning into spring, I knew we couldn’t rely on their kindness forever. I worked to get the mower started earlier this spring with some help. However, while we were charging the battery in the rider, the neighbor mowed the grass. So, we once again escaped the task.

We got a bunch of rain early in the week and it was turning jungle like out there. Thursday afternoon I warned my 13-year-old this was the day. Typical of most teens when confronted with a chore, it was met with eye rolls and groans. Maybe not so typical, it was also met with a few tears. You see, Tony was starting to show him how to mow the grass before he passed. Now he was faced with completing this task without his father’s guidance.

We head to the garage to bust out the rider and discover the battery is officially toast. But I live in a magical neighborhood, and as soon as I lifted the garage door where the mower is kept another neighbor pulls up on his rider. He shows Owen how operate it but can tell O is nervous. He cuts the first line for Owen follow along. Then pops in neighbor #2 for comedic relief. He tells Owen, who cares about straight lines and proceeds to mow a patch of zig zags in the yard. 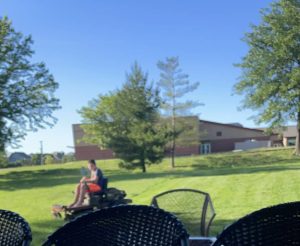 The combination of instructions and humor had Owen feeling a little better. He climbed on and proceeded to mow the whole yard with no rhyme or reason to the pattern. We could see him smiling out there occasionally as he got the hang of it.

When he was finished, we asked him if he had just a little bit of fun doing it. He replied, “Yeah, I kept thinking about how crazy it would have driven Dad that I wasn’t mowing in straight lines.” And he’s right, it would have driven Tony bananas and that makes me smile too. Tony always said, if I’m picking on you it means I love you. So, when Owen mowed the grass like that, he was showing Dad how much he loves him too.

I still haven’t mowed a day in my life, but Owen has, and he managed to tease his dad while he was at it.

My name is Emily Vielhauer, I am 42 years old and have 3 knuckleheaded sons who are between the ages of 8 and 13. My husband, Tony, and I were married for 14 years and despite how things ended we built something great together.