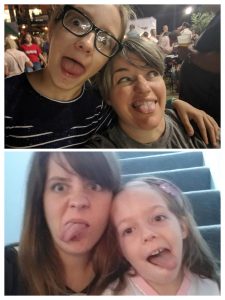 This is the sixth Mother’s day since Megan’s death.  Shelby is now starting to actually outgrow her mother’s shoes, and she’s almost as tall at 13 as Megan was at 33.  She looks like her.  A real “bean pole” right now.  At this age, she’s more concerned about video games, reading, riding her bike, and texting her friends than anything else.  From the outside looking in, it’s almost as-if she’s forgotten about her mother.

I’ve been waiting for years for the other shoe to drop.  Fearful of her beginning to resent or regret what happened.  Anxious that she’s going to pull out the cliched “you’re not my mom” at Sarah if there is something she doesn’t want to do.  I keep thinking that she’s suddenly going to remember more vividly her mother lying in a hospital bed, sedated, and saying goodbye.

I’m realizing that, perhaps subconsciously at this point, Shelby thinks very much like I do.  Of course we both miss Megan, but we got to have her in our lives, period.  We’re appreciative of that fact.  We’re also lucky to have Sarah, and though it may have seemed quick to an outsider to have her brought into our lives, it was Sarah that guided us through losing Megan.  At eight years old, Shelby needed a Sarah…not a “mom”.  At thirteen, it’s much the same.

It’s a subtle change, but this isn’t Mother’s Day for us.  It’s Mothers’ day.  We get to move that apostrophe one character to the right.  Shelby and I get to celebrate two amazing moms, although unfortunately, one of them can’t be physically present today.  Her blood and soul courses through Shelby’s veins though.  My fears of Shelby growing further from Megan have been unfounded…she is more and more like Megan as time progresses.  She is, if anything, closer to Sarah than she is to me.  I don’t mind that.  In fact, I adore it, because it’s not like Shelby and I aren’t close too.

I never will know if there is a “right” way to celebrate today, but I’m content in the knowledge that I don’t know.  I don’t think it’s required information.  Sarah lost her own mother when she was only nine, and three decades later, she still just lets the day play out however it does.  I do the same.  It’s somber, right now, as I’m the only one awake in the house, and I’m specifically writing about losing our daughter’s mother.  In a bit, as my world awakens, it will be a happy day.  Maybe later, when Shelby is literally dusting off the box that Megan currently resides in, it will shift over to sadness.  It’s up and down like that all day, but it’s not stressful.  It’s expected.  It’s planned for.

It’s ultimately a way of appreciating both of the wonderful mothers that Shelby has gotten to have in her life.