This weekend was a swirl of activities with soccer games, Easter and my oldest son turning 13. I didn’t have much time to look forward.

So now it is Monday morning, and I am entering this week with trepidation. This is the week that will make it 365 days since Tony passed.

I find myself looking backwards and forwards as I think about checking this next box on my Widow bingo card. 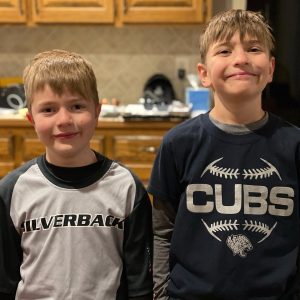 Tomorrow is the last night we spent together as a whole family. Our youngest boys each had a baseball game, the first of the season. We ate ballpark concession food for dinner and shuttled from one game to the next. It would snow the next morning, so the temperature kept dropping as the evening wore on. By the time we got home it was late. I snapped a quick photo of the boys in their uniforms before we tucked them in for the last time together.

Tomorrow my youngest once again has his first baseball game of the season. At the same complex, at the same time and the weather isn’t forecasted to be great. I am sort of hoping for a rainout, but he is looking forward to his first game so much that I don’t want to make him miss it. I’ll just make sure I’ve got a few tissues handy if I need them. Some of the other Moms in the stands have really shown up this last year and I know they’ll be ready to give me a squeeze.

A year ago, after we put the kids to bed, we snuggled in ourselves. I crossed the hump in the middle of the bed to put my freezing feet on him. We shared our last kiss and I felt him fall asleep against me. Like always, he got up early the next morning while I was still asleep. I wouldn’t see him again until the viewing at the funeral home six days later.

Over the last year, I redecorated our bedroom and got a new mattress and frame. I won’t be laying my head to rest there on the 19th. I’m not sure I want to sleep at home in that big bed alone that night. So, the kids and I are checking into a hotel with a large indoor waterpark for the evening.

That takes us to the 20th, the anniversary of his death. The kids and I are taking off work and school for the day. We will stay at the water park all day and play.
This whole year as I’ve navigated this path of grieving while parenting, I have tried to do two things:
1. Ask them what they want to do when the hard days like Father’s Day or his birthday come to pass.
2. Build good memories into this year of so much loss and firsts without.

I know that I will shed tears for what was lost this week. I will feel the absence of Tony like I have every day since he died. But I also hope to smile this week. I will cheer for Macklin every time he’s up to bat. I will go down the waterslides with those 3 boys we created together. I will be watching them with pleasure and horror as the wrestle in the pool like they always do. I hope you’re with us in spirit because I miss the crud out of you this week.

My name is Emily Vielhauer, I am 42 years old and have 3 knuckleheaded sons who are between the ages of 8 and 12. My husband, Tony, and I were married for 14 years and despite how things ended we built something great together.