After I’d edited and saved last week’s post, The Fine Art of Inoculation, my home experienced a powerful surge followed by a brief power outage. I later found out, however, that some of my neighbors had experienced a longer period of time without power.

This past week I continue to piece together the series of events leading up to Rich’s final days. With the aid of archived Facebook posts, I’m able to reach back and recall how we coped through it all and how the support of so many was so evident. It’s painful and cathartic to relive those days.

Last Saturday, my neighbors gathered for our twice annually held block party that was originated and organized with my fun-loving neighbor back in 2020. Then, we’d suggested these gatherings as a way for our neighborhood to meet during a period of isolation. Last October’s event was cancelled due to Rich’s hospitalization.

Last October, I remember printing the invitation for this event. They lingered in a pile as Rich and I discussed what to do next. He was still in home care and felt he would be well and able to attend. He encouraged us to distribute the invitations and proceed.

Two days later, however, Rich was admitted to our local hospital, and the following day sent to ICU.

Although it wasn’t easy, it was good to gather this year and to experience the process of Moving Forward. I thank my fellow event collaborator and neighbor Dawn and my community for helping me through the recovering process. 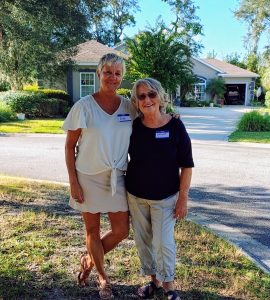 Last year at this time, Rich was under the care of a pulmonologist known as a Locum, a medical professional standing in for an absent doctor. Dr. “K” lived in the Panhandle region of Florida and covered our area in addition to the Midwest. He took a genuine interest in Rich and when Rich seemed to be giving up, he had him transferred to a sunnier larger ICU and prescribed an anti-depressant to help Rich rally.

Rich loved attention, but not the kind you get from Social Media. The only time I would share anything about him on-line, including photos, was with his express permission. During this trying time, however, I felt I could no longer pretend all was okay. I began to reach out to the world through carefully worded Facebook posts. Rich was still using his phone and one day, when I arrived at his ICU, I caught him scrolling on his phone, reading all the positive comments and reactions. Then, realizing I had arrived, he turned his head and glared at me! He didn’t want anyone to know how badly he was feeling, but I knew it did him a world of good to hear from so many friends and supporters.

Hope was still an option…

Despite growing up in a suburb of New York City, Rich was a huge Boston Red Sox fan much to the pleasure of my rather large band of New England-based relatives. During this time last year, The Sox were duking it out with the Houston Astros. During one game, Rich actually called and seemed energized by the hope The Sox would prevail They did not, and I realize now that this would be the last normal conversation that we’d have.

During those days, I became an ICU stalker, showing up at all hours to check on Rich. It was so hard just to sit home wondering and worrying. I remember our last Friday in that ICU. I was allowed to sit with him and watch tv. Back to the Future was on. This movie was one of the first we’d watched together in our new home in Georgia a year earlier. I recalled being amused that our house’s numerical address of 1640 was the same as Doc’s. Rich had served in the Navy as a Corpsman who are referred to as “Docs”. By now, he had no energy to converse.

Early the next morning not long after midnight, I received a call to come to the hospital. When I arrived a mutual decision was made that Rich would be placed on a ventilator and moved to an ICU in Brunswick, GA. It would be the last time we’d communicate.

Thanks for allowing me to share. Have a good weekend and week. Wishing the Yankees a quick recovery tonight as they return to home turf. 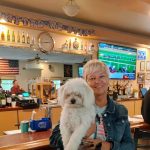