You know, there are a lot of coincidental similarities between you and I.  I mean, even at age 6, I was fascinated by flight (spaceflight specifically, at the time), visiting Kennedy space center, and the US air force museum.  I enlisted in the Marine Corps at 17, and guess where I ended up?  Marine Corps Air Station Cherry Point, in North Carolina.  In the air wing.  I grew up in Ohio…where the Wright Brothers, John Glenn, and Neil Armstorng are all from.  Our license plates even say “Birthplace of Aviation” on them.  North Carolina, where that first flight happened, is where I ended up…”First in Flight” is their moniker.

You?  You were a pilot, specifically, which trumps all of my own experiences with the air and relating to aviation.  I mean, I got to fly in the cockpit of a military cargo plane one time…soooo, yay?  Not quite the same as being at the controls of something that seemingly defies the laws of physics.

But I do have one thing going for me…I just got back from North Carolina.  I got to see the front gate of my old base for the first time in almost twenty years.  Sarah, Shelby and I went to the beach…the one I frequented so long ago, but that neither of them had ever seen.  I hadn’t even met Megan yet the last time I was there.  Hell, you were still in high school.  It was a good way to get away from all of the virus crap that’s been going on for months now.  Not a long drive, relatively inexpensive, and pretty much all outdoors and socially distanced, since it’s not a typical east-coast touristy beach.

Lingering in the back of my head all week though was the fact that this past week started with you and Sarah’s anniversary, and ended with the anniversary of your death. Honestly, you may have had more fun here than even Sarah or Shelby, given all of the helicopters and V-22 Ospreys flying around over the beach, the auxiliary landing fields being scattered around the coast, and ultimately, where I decided we should stop by on Friday, on our way out and the official anniversary of your last flight. 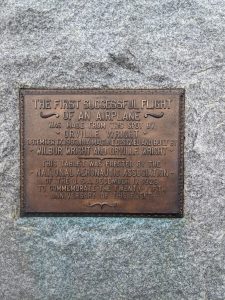 It was the place where the world’s first controlled flight departed this earth.

It wasn’t lost on me, that, had two brothers from Ohio never came to Kitty Hawk, North Carolina, over 100 years ago, and done what they did, you may have never crashed.  I mean, it’s a long stretch of the butterfly effect, but it’s not outside of the realm of possibility.  They flew the first heavier-than-air machine.  You flew one too.  I figured, since we weren’t in Texas this year to visit your tombstone, I wanted to see or do something that would have honored your love of the skies. 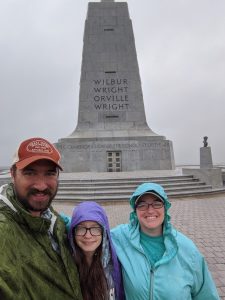 Granted theirs isn’t so much a tombstone, but the epitaph inscribed on that memorial is just as fitting.  “In commemoration of the conquest of the air” is how the inscription begins.  Enough said.  The three of us went here, on the anniversary of your death, precisely because it was in commemoration of your own conquest of the air.  Sure, if Megan, Shelby and I had ended up here, we might have gone too, because frankly it’s incredibly interesting to me to be in that place, but there wouldn’t have been any real, special undertones.  We certainly wouldn’t have went three hours out of the way on our travel home.

A lot of you lives on in Sarah, and I wanted to make sure that you got to see it.  While there are a multitude of things about me that incidentally relate to aviation, you were the real deal.  You deserved to stand at the marker where it all began.  I do have to wonder if Sarah would have been as interested to be standing in a cold rain by some boulder in a field on the North Carolina coast if you hadn’t died and were standing beside her, but nonetheless, she was certainly moved by it now.  I can only imagine you would have been giddy about it.

I don’t really care that we’re back home now, and I’m preparing to go back to work tomorrow.  I don’t care that vacation is over.  What I do care about is that for not only Sarah, but for you, we stood on the same ground that the first pilots did, and saw the place where they left that ground.