There was always a bit of competition between Megan and I as to who could be the “favorite” parent.  It was playful, obviously, but between the two of us, we were always trying to get the “better” birthday present for Shelby, or take her to the more memorable thing to do, or tell the funniest joke.  Whomever could make Shelby laugh harder got to “win” that battle.

Megan won, more often than not.  When Shelby was younger, it was Disney princesses and ice-capades.  Pink everything and dance competitions. Every so often though, I would swoop in with something like fishing or a funny “dad” joke (to Shelby, at least), and I would get to win that day’s competition.

All of this was in good fun, and it only benefitted Shelby.  She got to experience multiple events, types of hobbies, or memories that she wouldn’t have otherwise.  It helped her form the interests she has today.

But, as I am sure you are aware, considering the fact that you are reading this on the Soaring Spirits website, Megan died a few years back.

Almost 5 years, to be more precise.  For that amount of time, there hasn’t been that playful competition between Megan and I.  It’s been “all dad”. As hard as I tried, she really isn’t interested in football. She doesn’t listen to country music or enjoy working with power tools.  Her favorite color did not morph from pink to red, but rather, to teal, which is Sarah’s favorite.

I’m now in “competition” with Sarah, and, just like the old days, I’m on the “losing” end more often than not.

But there is one interest that Shelby and I share.  One that, on the day I introduced Shelby to it, I felt like I “won”, and one that has continued to provide a shared enjoyment for years.

Yep.  That’s the one.  It may sound silly, but I grew up with Weird Al Yankovic myself.  The first album I ever owned was his first album, and I’ve owned every one after that.  It’s just…a thing. He’s incredibly talented and creative, an amazing artist in his own right, and his music and parodies have just simply been a part of my life since I was a young boy.

I introduced Shelby to Weird Al when she was maybe 4 or 5, and she picked up on him right away.  We still sit and watch his videos on YouTube all the time, or take long road trips listening to his music…to the point that both Sarah AND Megan have made the statement of “can we finally listen to something else?” followed by Shelby and I simultaneously answering “no”.

The point is, Shelby and I share this interest, regardless of the women that largely influence our lives.  It’s not a big thing, but it’s something we share.

So when her birthday rolled around the other day, we decided that, becoming 12, she was ready for her first concert.

Guess who I suggested we get tickets to? 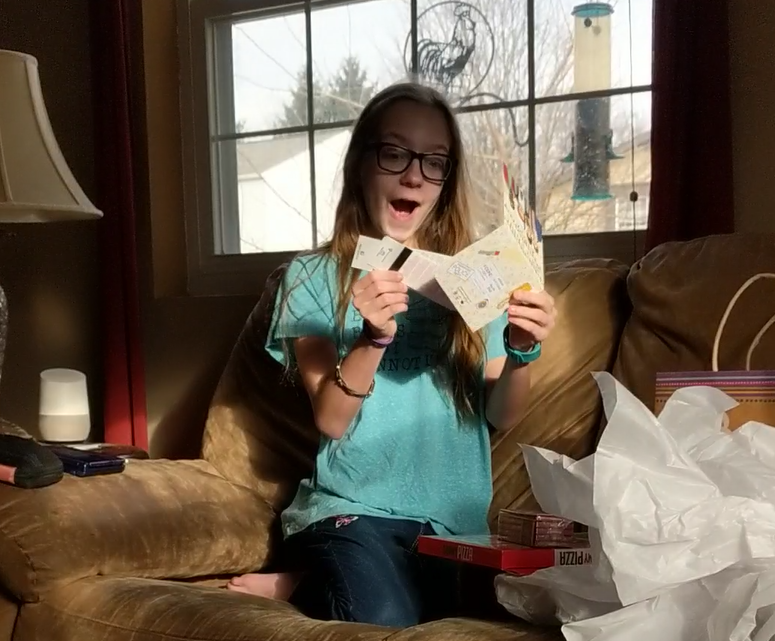 Shelby had a TEAR!  A real, honest-to-goodness tear of joy and excitement!  She wouldn’t fully admit it, mumbling some excuse about coughing or something, but to see that one little tear come out after realizing who she was going to get to see actually made ME well up.  We were both sitting on the couch, excited that she and I would get to share in this together (I’ve never seen him in concert either), and I think Sarah may have felt it was a bit on the silly side, all the while, of course, being happy for the both of us..

Megan would have reacted in much the same way.  Regardless, this whole rambling post about “favorite parents” and birthdays and Weird Al Yankovic brings me to one point.

I am still trying to win the favorite parent contest, years after Megan’s death.  I think it is honestly, healthy. It’s still playful, whether it’s between Megan and I or Sarah and I, but it keeps Shelby’s memories with Megan alive.  It forms new memories with Sarah. Shelby has gotten to have three parents that are all partaking in an effort to raise her right and give her lifelong memories.

Even if Sarah wasn’t in the picture, and it was just Shelby and I, this effort would still be made.  If there’s one thing I’ve learned, it’s that both Megan and Sarah’s talents for capturing Shelby’s interest and love are overwhelmingly large.  I get to simply enjoy a “win” once in awhile.