And, yes, I do keep track of how long it’s been. In days and moments and months and years.

Yes, every moment of this life is defined by his death because the only reason I’m living this life as I am is because he died.

Yes, every moment of this life of mine is defined, equally, by the enormous quantity of Love that he left behind for me.

I strive, each day, to sift all that is this grief, which is much more than sadness, through the filter of Love.

In the beginning time of widowhood, by which I mean the first 5 years, this wasn’t possible for me to do. I knew the Love we’d shared was there, but it didn’t matter, because he was dead and it wasn’t enough.

It still isn’t enough, but I take all that is unbearable and impossible and sift it into that Love that he left behind for me.

The only thing I know to be true in this life without Chuck is that, if it is at all possible, he left all that Love behind for me when he died. 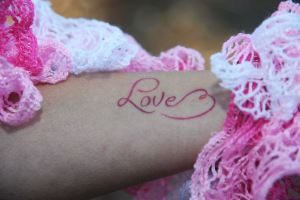 We were in a rental in southern CA. I had no physical home to return to; Chuck was my home, as I was his.

We’d spent our last 4 years together living full time on the road, staying at inexpensive hotels and at military base lodgings.

The idea of settling down without him, anywhere, freaked me out in the extreme. I didn’t want to be where he wasn’t. Maybe I’d find a connection to and with him out on the road somewhere, was my thinking.

I bought a trailer to go with the new car I’d bought with his life insurance money. No, I didn’t feel guilty or sad about that. I used the money exactly what it was intended for; creating a life for myself after his death.

Before he died, having told him that my plan was to continue traveling, I told him, too, that I would paint my car pink so that he could find me out on the open road. I’ll forever remember the small smile on his lips as he looked right into my eyes and responded I’ll be looking for you. 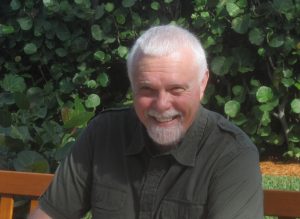 I was terrified to set out on my own. Grief is isolating. I knew nobody out on the road. If I did as I promised him…paint my car and trailer pink…that would draw people to me and keep me from isolating myself.

If I started writing about navigating widowhood and the open road, in the midst of devastation, if I posted something everyday on our Happily Homeless fb page, then maybe, if I didn’t post on a particular day, someone would notice and reach out to me, asking if I was okay.

All I wanted to do was drive into the desert and disappear. It took everything in me not to do that. On some days, especially now in the midst of the trauma and chaos of our world, I still fight that urge.

My wardrobe, already pink in most ways, became almost entirely pink. Chuck said to me, in his last week don’t mourn for me in black. It isn’t your color. Wear pink.

I wear something pink everyday since he died. My goal is to wear pink everyday, ultimately. And I’m proud to say that I’ve gained a rep as that lady in pink.

I haven’t allowed myself to disappear, no matter what.

As I drove around the country, 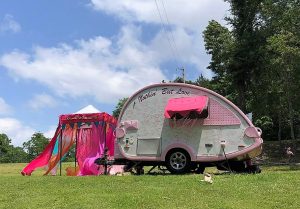 I discovered workamping as a method to support myself, and I worked at an opera camp where I drove a tractor and learned the New Orleans strut from our sous chef, and a renaissance faire, where I learned about theater and spoke to a Prince and my personality began to shine again.

My voice strengthened as I projected it, as my job required me to interact with thousands of people every weekend. I started repurposing clothing, even though I don’t sew. A bit of trim here, an old button there, taken from an old piece of clothing, and added to another piece of clothing. I grew comfortable wearing what most people consider costuming, especially while out on the road. 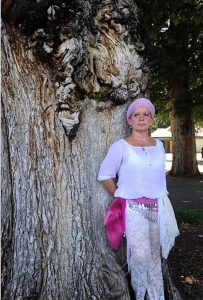 A beautiful pink top hat that I decorated with feathers and trim. 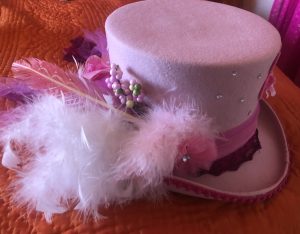 A bright yellow bodice made for my faire days, but worn as a top over a bright pink blouse. Lace leggings with a jangly scarf tied around my hips. Knee high boots with sparkly necklaces wrapped around the instep.

It doesn’t bother me in the least that people stare at me. And they do. Honestly, I assume they’re staring in admiration, wishing they had half the nerve to dress how they please, but don’t dare, for fear of judgement.

Also, people staring at me is a bit of the point.

Too often, widows hide themselves from the world, for too many reasons.

Too often, the words we wish to speak choke us before leaving our throats.

Our words, our hearts, freeze in place, because we fear judgement from others.

And yes, that judgement is there. For me, too.

Here’s the trick to that.

Don’t give a fuck. Not with anger, but with Love for self and survival. 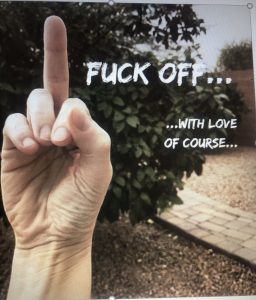 The knee high boots I wear, draped with jewelry, are perfectly capable of kicking in doors, figuratively speaking. Kicking in and kicking down the doors of judgement and silence as our culture shuts down the unpleasantness of grief that we represent.

The pink clothes I wear are the armor that I don every morning. I refuse to fade into the shadows. The sparkle and glitter I wear ensure that light casts itself on what is real. Shadows and light. I wear armor because I know…have known…since I learned, one month before Chuck died, that I would soon be a widow, that I was in for the fight of my life and it would, and does, require every ounce of strength and courage that resides in my bones. I am a warrior.

I promised Chuck before he died that I’d spend the rest of my life ensuring that every person I met would know his name and who he was, not only to me but to the world at large. I’d get out there and kick ass and take names.

All in the name of Love.

My pink car and my pink trailer, with the color named in Chuck’s honor. It’s my chariot.

My chariot, not only painted pink but covered in hundreds of names and Love notes from chance met people on the road, takes me where I need to go on this Odyssey of Love. It is covered with Love. A traveling tribute to Love. 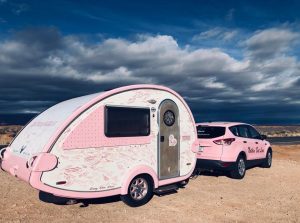 My two selves battle each other every morning when I swing my feet to the floor.  One self doesn’t want to live this life without Chuck.

The other self hopes that I have enough time left on this earth to accomplish all that I want to accomplish, with my Odyssey of Love. This self wins out every day, if only begrudgingly.

I know who I am, even as I create myself. I know my why, even though I have no end game. I’m completely comfortable living with one foot in the past, with Chuck, and living this life as a fucking warrior goddess. I preferred that life, but this is the life I have and I will, by god, make it as grand and passionate as the life I lived with Chuck.  And, since this life pales in comparison, in my mind, I’m also completely comfortable with the fantasy life I live in my head. A life that is filled with romance and Highland warriors and passion and intimacy and, well, all that I had with a man named Chuck D.

I know I was loved more than any woman was ever loved, by a man who touched my life deeply. 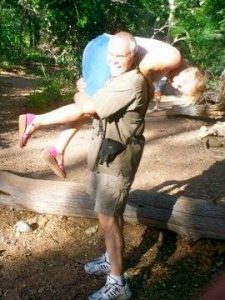 I know that I’m a fucking warrior goddess, and I have much to do in order to complete the mission that Chuck set me on in that last conversation before he sank into oblivion and took his last breath.

And though I am, of course, vulnerable as a human, I am fucking invincible in spirit.

And that, my dears, is how I survived, and how I live.

I am armored in Love.

Curious people along the way have admired my rig and said oh, it’s like a Barbie house!

I’ve hidden my disdain well, but I very pointedly respond that no, this is most definitely not Barbie pink.

It’s FUCKING WARRIOR GODDESS PINK, and it’s my color only, not some pale ass Barbie color.

Said, of course, with all the Love in the world, because I have no room for any other emotion.

Don’t mess with this pink.

Don’t mess with this FWG.

Ultimately, I will draw you into the weave of all this Love, and you will feel strengthened and braver than you ever thought you’d feel, and I’ll tell you about Chuck and we’ll speak of Love and how it is the most powerful force in the Universe, which is how we live on, no matter what.

I promise this to you. 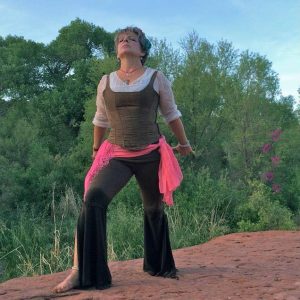 As I promised it to Chuck.

All because of Love~