I have been in the/my Motherland – England – these past days. It’s been wonderful. And it’s been weird. Though as I write, I have just crossed the border into Scotland at Gretna Green, and will soon be level with Lockerbie – forever imprinted in my young adult memory after the PanAm terrorist downing just before Christmas in 1988. I was 21, in my final year at university, and had just arrived in my mum’s Lake District cottage with Mike to spend Christmas with my family. Such a memorable week for myriad reasons.

It is the first time that I have been back to the UK since the pandemic started in early 2020, and the first time since Brexit went into effect, rather than just being talked about. I found to my delight that I could travel out of Geneva on my French passport (thus taking advantage of the simpler passport control procedures there) and into the UK on my British passport. I expected there to be a UK citizens-only queue, then an EU one, then an Everyone Else one – but in Manchester airport the “formerly EU Brits and current EU citizens” could queue together. It was all very smooth.

I could write a whole piece about what I have noticed since my last visit – like my Liverpudlian Uber driver telling me, the moment he heard I lived in France, “We fucked up. If there was another referendum tomorrow, it would be 80% to Remain. We were lied to”. Yup – the British people were lied to. I am so sorry to hear the stories of regret and of lives now even harder in places where the EU formerly invested heavily.

I could also write a whole piece about travel upheaval due to train strikes. But hey, it’s just bad timing for my trip, and the French are pretty good strikers. There’s nothing particularly novel about strikes in places I have lived. Yes, my travel got disrupted. I had to book and rebook tickets. I had to spend a night in an airport hotel instead of getting to my destination. But I made it to everywhere I needed to get to on time. Nothing problematic in the grand scheme of things. I did, though, thank every single member of the rail transport community I saw on the “day after the day before”, such was my gratitude for them showing up to work so that I could make it to the Lake District for my Lake Coniston Swim.

But instead, most of this piece will be about beautiful, tender and heartfelt text and voicemail messages between me and my precious widbud friend, Charlotte, during Saturday 25th June. We discovered that we were both doing “significant” sporting events that day. I was down for a 5 ¼ mile (8.4 km) swim from one end of Coniston Water to the other. And she was down for a 140 km bike event somewhere east of where she lives where dinosaurs used to roam!

Charlotte and I are in touch almost daily. We send one another text or voice notes at the start or end of our days – just checking in, sharing an incident or two. At a basic minimum, I send her off to bed, she checks in on my alcohol consumption levels, and we enquire about fitness building practices. It is a judgement-free zone.

Quite aside from widowing, we have a good bit in common – at least interest-wise, if not professionally. We are also quite sure that, had our husbands lived and met, that they’d have liked one another. And that we’d all have got along famously as a foursome. I am also quite sure that, had my life’s path crossed Charlotte’s for other reasons, and not just because her Adrian and my Mike had died, that we’d have been friends. I don’t just love her because she’s a widbud. She is more than a widbud. She is a friend and a widbud, rather than a widbud and a friend. I often wish she didn’t live quite so far away from me – in the Canadian Rockies, 8 time zones away when I am at home in France.

We both love big nature and the great outdoors, and enjoy doing sports and taking part in sporting events. We are also both “bravely nutty” enough to enter events that seem just that bit too much of a stretch. We want to do them, but can be a bit in awe of what we have just got ourselves into. And so some encouragement, some being alongside, and some feeling into what the experience might be like for the other, comes into its own, even if she has little desire to do my kind of events and I have no desired to do her kind of events.

And so it was yesterday, when I had a big swim (technically a warm up swim for the really big big swim in a few weeks). And she had a big bike ride. I worked out that I would be just about finishing my event, early afternoon UK time, as she was about to start hers, early in her Canadian day. We sent messages of encouragement to the other, and silly photos of before and after. She looked better after her bike ride than I did after my swim! 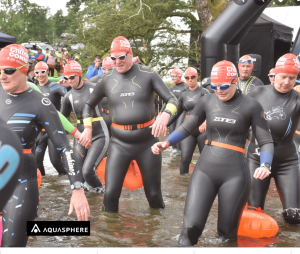 I am in the middle of the back row!

I had a sense of “passing the baton” to her – in time and space – of being with her and her being with me. And this feels important because it is tough to do these events alone. To sign up, to do the requisite training, to organise the travel and accommodation, always on your own. It’s tough, not to have someone close to you at the start, and to know, before you even get into the chilly lake water, before you clip on your bike helmet, that you’ll not be met and hugged at the end. That yes, while there might be strangers cheering you on, and while the applause is genuine enough, the person who did these kinds of events with you in a former life – the person who checked your gears and brakes, who zipped up your wetsuit and ensured your hair was safely tucked under the silicone swimming cap, who, though not necessarily right alongside you during the event, would be there at the end – wouldn’t be there this time. Or any future time.

It would be easy to hang up the wetsuit. It would be easy to put away the bike helmet. But then we’d be missing out on even more of life. And there is no sense in that. I love sporting events. I grew up on them – mostly orienteering, but occasionally swimming too. Later, with Mike, we did long-distance trail runs, triathlons, and he supported my first long open water swim over ten years ago. Even if swimming wasn’t so much his thing (and well one of us needed to be there with the kids), he’d be there at the start and finish.

I miss his warm, quiet, gentle and encouraging presence. His sheer pride in me when I finished something bigger than I thought I could do. He’d be there with a flask of hot tea, bananas, eggs or cheese (my go-to food for endurance activities). And his smile would be bigger than mine.

It was these kinds of thoughts I was having yesterday, after I’d finished my big swim, collected my medal, and had hot Ribena. I simply got on the minibus for the ride back to the event centre with its changing rooms. Apart from “hello”, “good luck” and “well done”, I barely exchanged words with anyone. So it was good to be able to share some of it with Charlotte, to leave a couple of messages about what I had just done and wish her luck and enjoyment for what she was about to do. To acknowledge the gaping absence of her husband in what she was about to do. To acknowledge her – and my – persistence in investing in life and sport. And to honour her, my, our courage and widowing spirit.

I trusted that Charlotte was thinking of me from time to time, early her morning as I was still swimming, as she was getting ready to get on her bike. And I thought of Charlotte often during the rest of my afternoon and evening, knowing she’d be pedalling away for hours. And I relished the photos and updates she sent me as she had breaks.

We were sort of in it together. Being alongside one another’s big endeavours. Witnessing courage and strength. Physical strength, yes of course, but emotional strength and courage too.

“Hi Charlotte – I really want to wish you good luck. I feel very moved, actually. I do think I am passing you a baton today, alright, and you’ve got it. And I think it’s remarkable what we do, you and me. I think we’re fucking amazing widbuds. I feel really pleased with my swim. It’s very moving always because I want someone there at the end for me, and there isn’t. And it will be the same for you. But I will be with you, ok, sweetie? And I thought of you while I was doing my swim, as you were probably starting to get up and get ready. So enjoy it lovey, just enjoy it, and I’ll be with you. Bye, love”.

“Hey Emma – Thanks for the baton and for your very emotional message. And I am emotional too in that sense of feeling unsupported. Adrian would totally be here with me. I appreciate that we are with each other across the world”.

It feels more accompanied, somehow. Even if it is support from so far away.