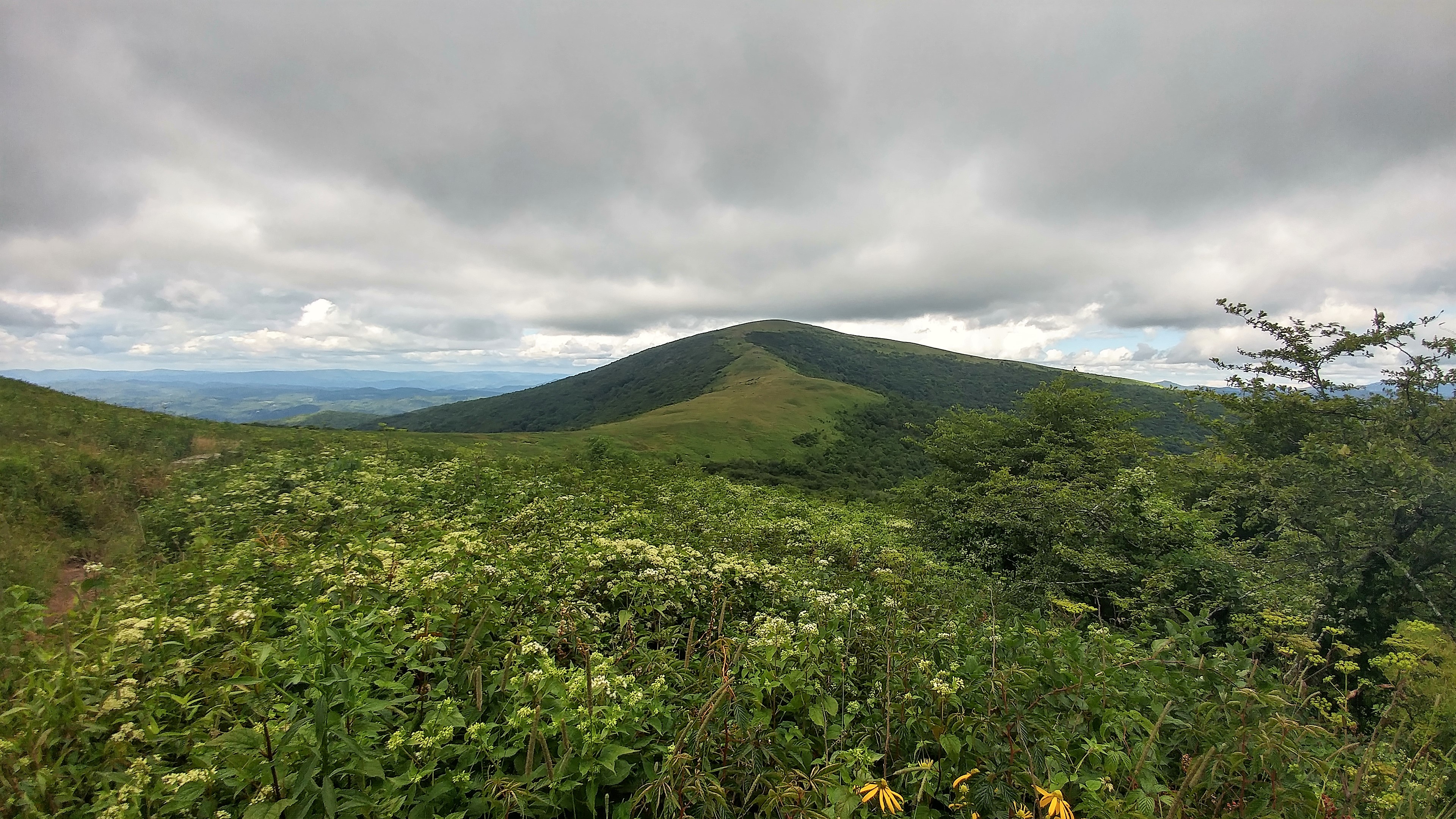 As Sarah noted on Sunday, I stepped off into the mountains last Friday, disappearing into the wilderness on the border of Tennessee and North Carolina.  It’s no surprise to any of you that have read my posts for these past two years that backpacking, in isolation, is the most transcendent experience that I personally can have.  No matter how my wanderings unfold, they always mean something to me.

However, I haven’t really experienced anything new in the three plus years since Megan was first admitted to the hospital.  I’ve went to familiar places.  Places that I could ramble into, disappear for a few days, and feel the comfort and safety of a home away from home.   Places that I had been to so many times that I could navigate every trail blindfolded and say “Hello, again” to every tree.

I’ve made a few slight forays into areas that I had some slight interest in prior to Megan’s death.  I dipped my toe into trying something new on a couple of trips…one in Ohio, one in West Virginia.  Both of those trips were “failures” in the sense that I bailed out early from both, and came home.  I either walked further and faster than I planned, arriving back at the car before it was even supper time, or, I just came home a day early because I was anxious about being that isolated in an unfamiliar place, with a partner that understandably has some triggers about that very issue.  I felt guilt, being outside.  The same guilt I felt when I would leave Megan for a weekend.

Most of all, on those two “shakedown” trips, I settled.  I feigned interest in them because they were close to home.  It was easy enough for me to take off from work on Friday afternoon and drive a few hours, arriving at the trail before sundown.  I planned “loop” hikes, knowing that no matter which direction I walked, I could arrive back to my vehicle easily.  I had no “skin in the game” with them, because in the back of my mind, I was aware that I could just “quit” when I felt like it.  We ensured that Shelby was at one of her grandparents’ homes for the weekend, granting Sarah the ability to do whatever she wanted without needing to consider Shelby’s needs.

Last week though, something sparked.  I have always wanted to hike the entire Appalachian Trail, albeit in sections (I mean, really, I’m 36 years old and have a child, I can’t just take a “gap year” to go for a walk).  Until last Friday, I had completed about 70 miles of it’s 2100 plus miles length, in various states.  As I started talking to Sarah about taking another trip this past weekend, I became less and less interested in “settling” for a nearby, easy, familiar trip.

I researched furiously for a few days.  Starting with wilderness areas within a few hours, then somehow ending up obsessing over the Roan Highlands on the Appalachian Trail in Tennessee and North Carolina.  I read accounts of other hikers.  I looked into shuttle services (because I wasn’t settling for another “loop” hike, or just going “out-and-back”).  I wasn’t going to settle for leaving at midnight, so I could arrive at a trailhead at sunrise.  No, I was leaving work early on Friday, driving seven hours, and staying in a hostel.  The same hostel would drive me up to the top of the mountain the next morning, where I would step off back towards my car…15 miles away.  There was no easy way to bail out of this trip.  I couldn’t turn around before the halfway point, because the shuttle had left and my car was the other way.  I couldn’t simply just walk the entire 15 miles in one day back to the truck, because I had 40 pounds on my back and thousands of feet of ascending and descending on the trail.  It would have been midnight before my out-of-hiking-shape body could physically accomplish that feat.

And I did just that.  I drove seven hours, slept on a cot/bed in a hiker hostel, and was dropped off in the morning clouds at 5500 feet Saturday morning.  I walked.  I ascended even higher in chilly wind and dense clouds to the first summit.  The Roan highlands are well known for their expansive views, for the mountaintops are uniquely treeless here (they’re called “balds” for this very reason), but for the first three summits and 4 miles, my world was a view of about 25 yards in any direction. 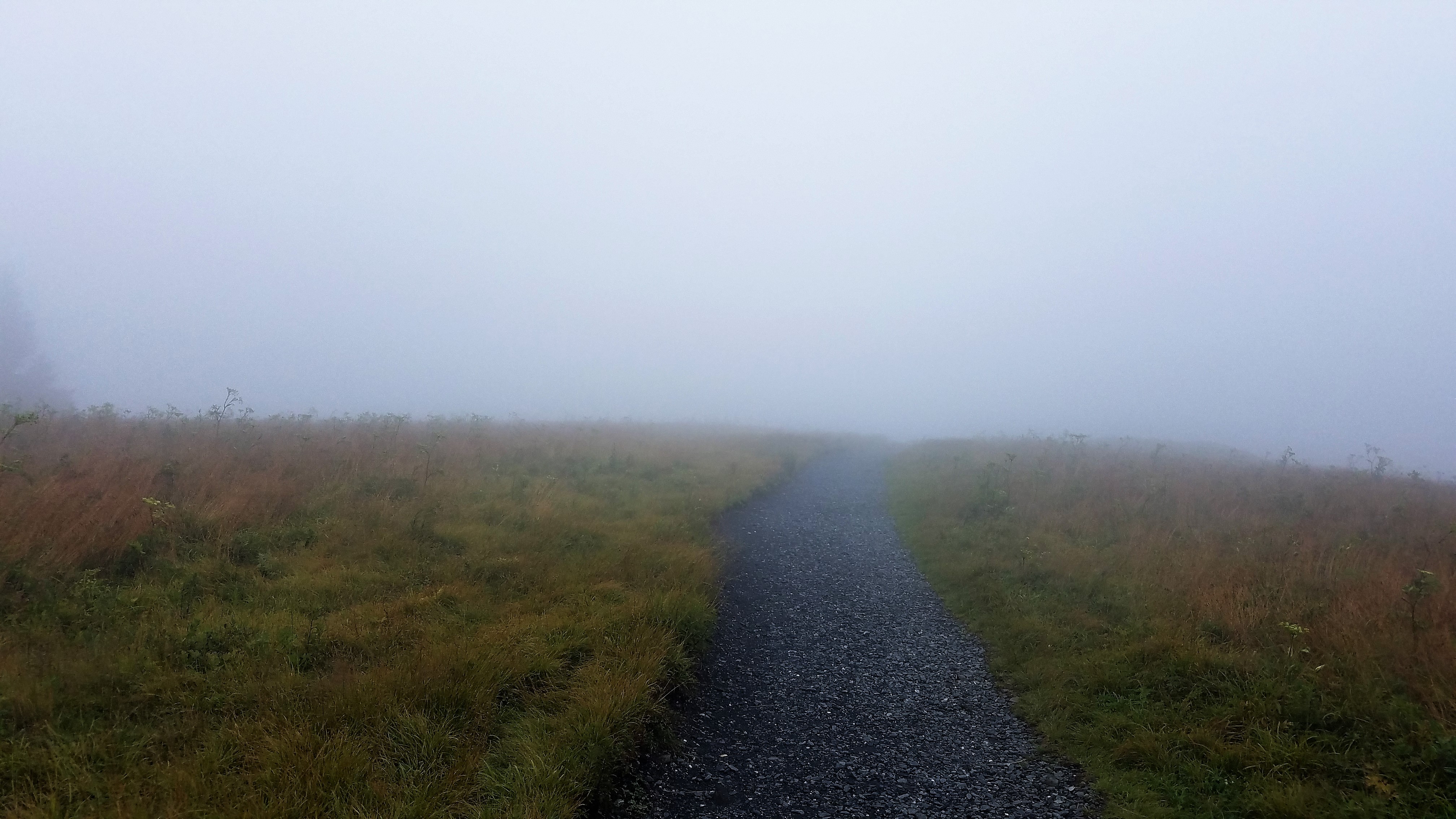 It was beautiful, quiet, cold isolation, and it was exactly what I needed.  I was instantly glad I hadn’t settled.

Eventually, after a long descent through the woods, the clouds began lifting and a few views of distant peaks began to appear.  As I arrived at my lunch spot, 6 miles into the trail, the misty gray world had turned into a cheerful, cotton ball-skied painting of mountains and ridges and wildflowers. 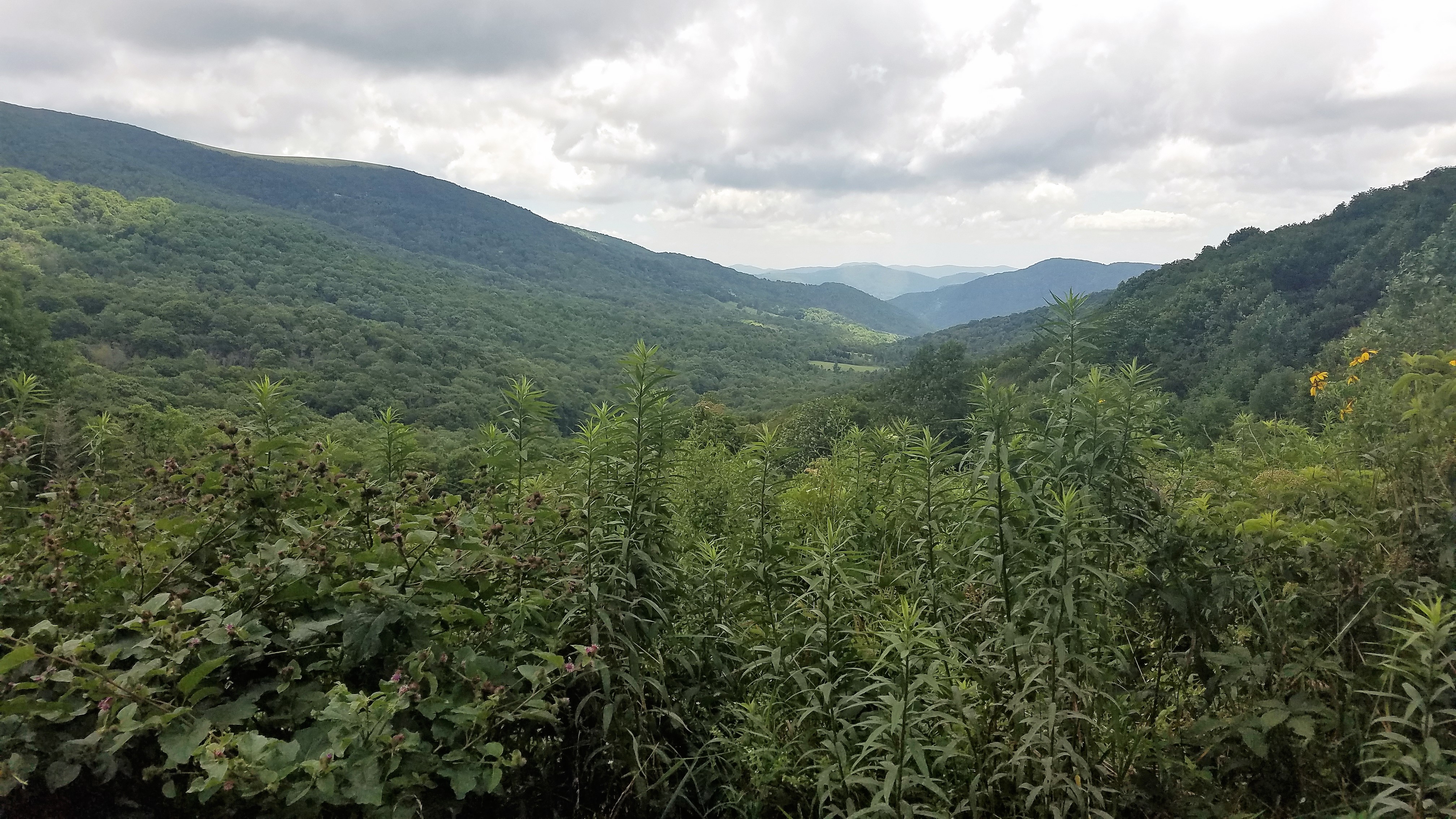 My feet ached, my stomach growled, and my mind was as clear as the air.  I was again glad that I hadn’t settled.

Checking my map, i knew that after lunch, I would have a huge climb out of the mountain gap to yet another bald.  It was at that point that I had the thought that “well, I could just stay here at this shelter.  It would be easy to settle for getting this far, hike out back to where I started in the morning, and call it a success”  Then I packed my bag back up and started climbing.

Two miles and 800 feet of elevation gain later, I reached the top of “Little Hump Mountain” (yes, that’s really what it is named).  My lungs were on fire.  My legs were weak, and my back felt as if it had been compressed in a vise.  But, I was at the top.  Sitting on a rocky outcropping and sipping cold mountain spring water, I could see peaks 70 miles away.  Peaks that I HAD visited before, and peaks that I have yet to visit.  I could see the distant blue-gray Smoky Mountains, my favorite place on earth.  I could see the Blue Ridge and Grandfather Mountain, where the three of us will be travelling in a few weeks.  Mount Mitchell, the highest point east of the Mississippi River, loomed like a dark gray behemoth, still shrouded in clouds over 1000 feet higher than where I sat.  It was breathtaking, both literally and figuratively. 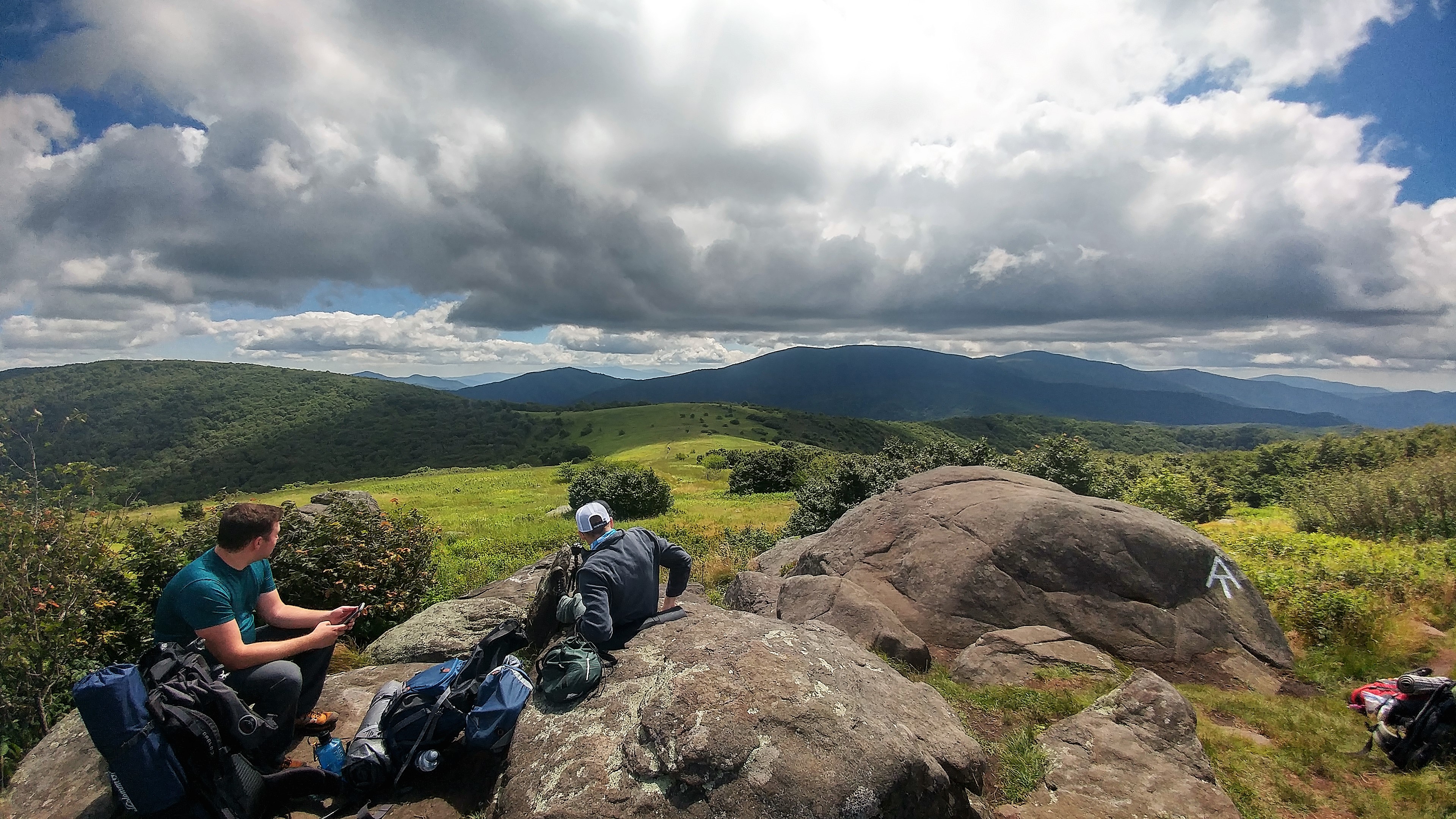 I had made it over the first, little hump, not settling for mediocrity.

As I began walking again, the next peak on my hike came into view.  It was black and foreboding, with a dark cloud literally hanging motionless over it.  I knew I had to descend into a deep gap before reaching its base.  A gap so deep that you couldn’t see the bottom until you reached it.  I thought to myself that I could just camp in that gap, 9 miles from where I started, and I wouldn’t have to deal with the godforsaken difficulty of the climb today.  I could make that climb when I was well rested and ready for it.  I had met a few people on the prior summit, and hiked with them for a bit, chatting about the impending doom that we approached. 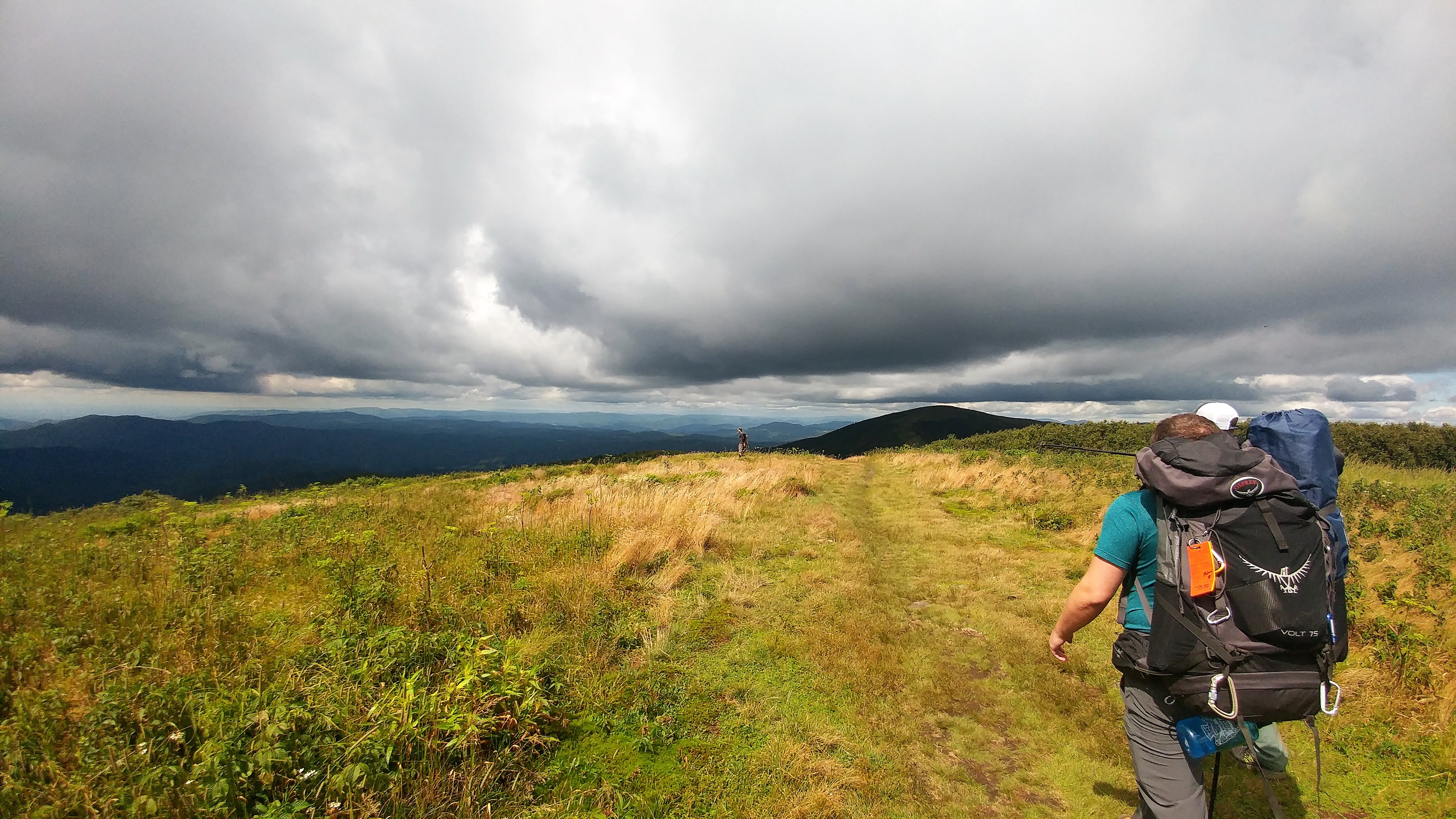 I don’t know if it was the shared experience of hiking with like-minded folks, or the distraction of quite possibly the most beautiful vistas I have ever seen, but when we finally reached “Bradley Gap”, the two other hikers I was with stopped to fill up on water, and I continued marching…up. 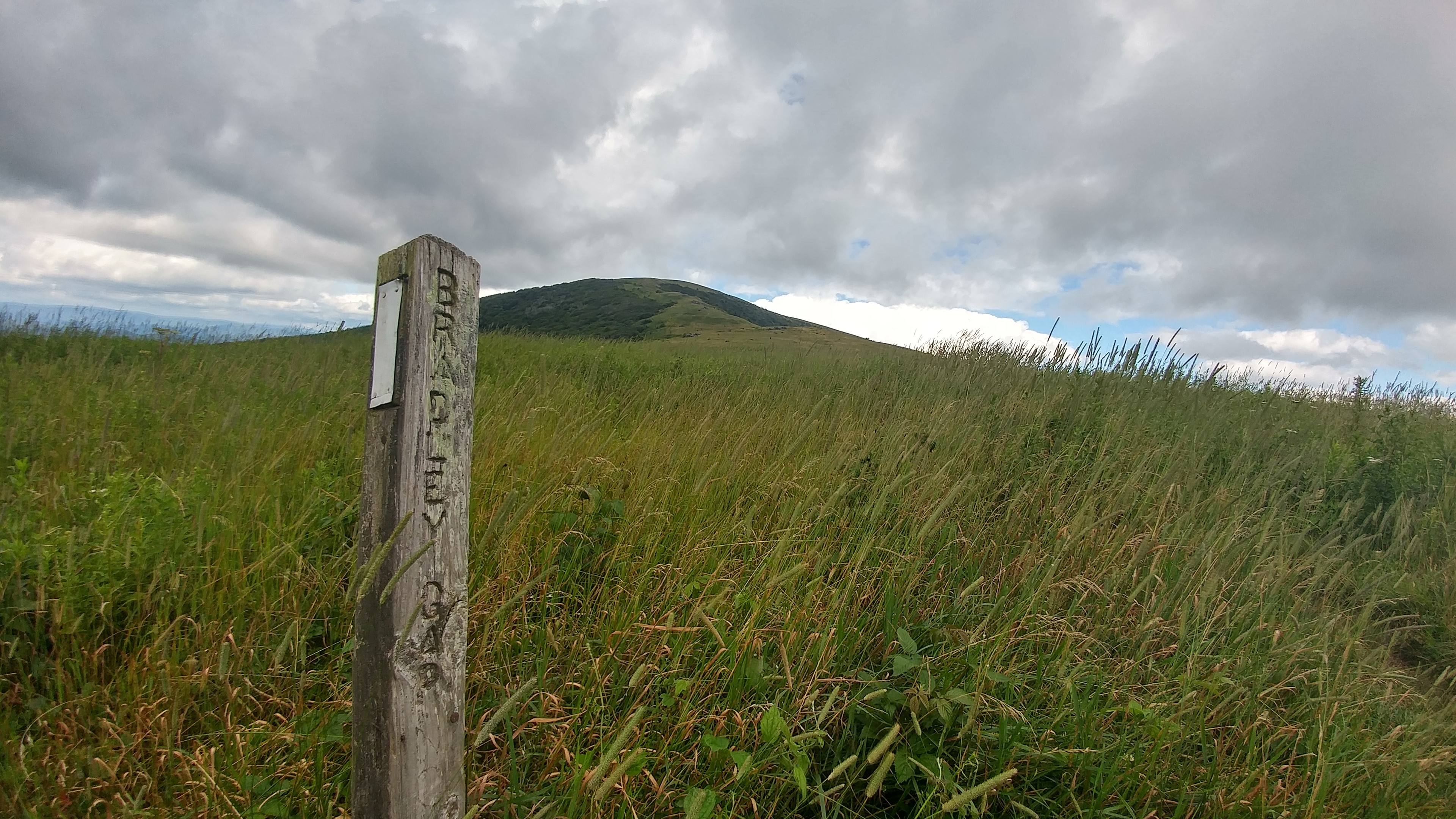 I climbed for over an hour.  It was two miles, all uphill, from the gap to the summit.  It was treeless and open the entire way, with three “false summits” (where it appears that you are nearing the summit ahead, but really, the slope just levels slightly out of your viewing angle).  The march turned into a step-over-step rhythm, with the only stops being to see where I had come from, see where I was going, and to see where I currently was before continuing.  There were no thoughts of settling for stopping and resting.  It was something that I not only “needed” to finish to reach my campsite, but that I wanted to “conquer”. 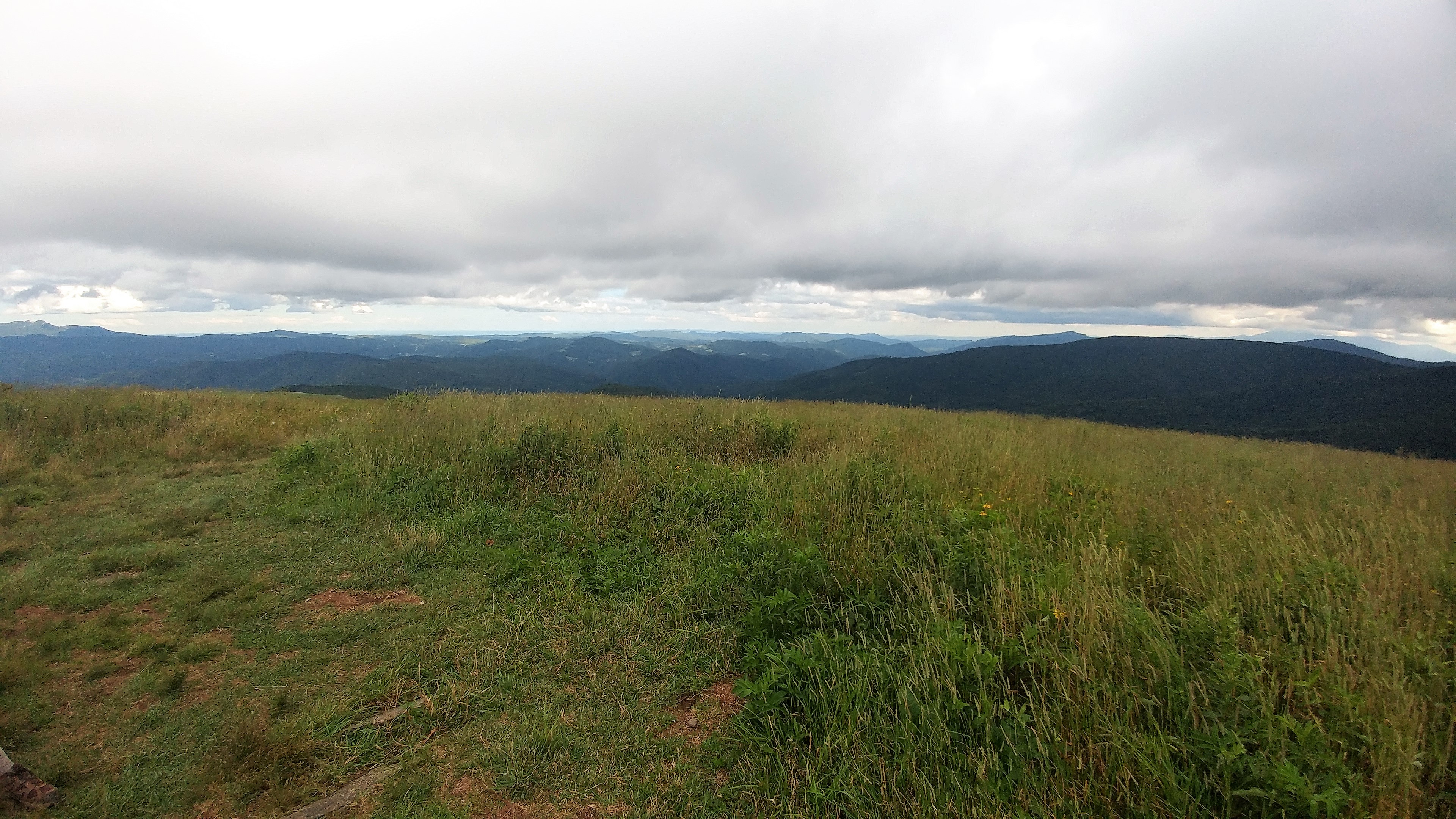 A 360 degree view of every single range of the Southern Appalachians was presented.  It was downhill in every direction.  I stood atop a rounded, bald mountain, feeling accomplished, yet tired, as the other hikers below appeared as ants along the trail.  I had refused to settle, and I was rewarded with a view of not only beautiful, wild mountains, but with a view of myself.

I had made it to the top of Hump Mountain, known by hikers and locals as “the hump”, for its rounded shape.  Because I hadn’t settled for easy, close, convenient, mediocre, or relaxing, I had quite literally “made it over the hump”.

It was an easy descent a few miles later to my campsite, save for some rocky patches where it would be easy to twist an ankle.  I slept like a baby, 13 miles and 5 summits distant from my start point.  It was only a few short miles back to my car in the morning, all downhill.  Along that final stroll in the morning, a hiker had left a poignant quote, scrawled on the overhanging rocks… 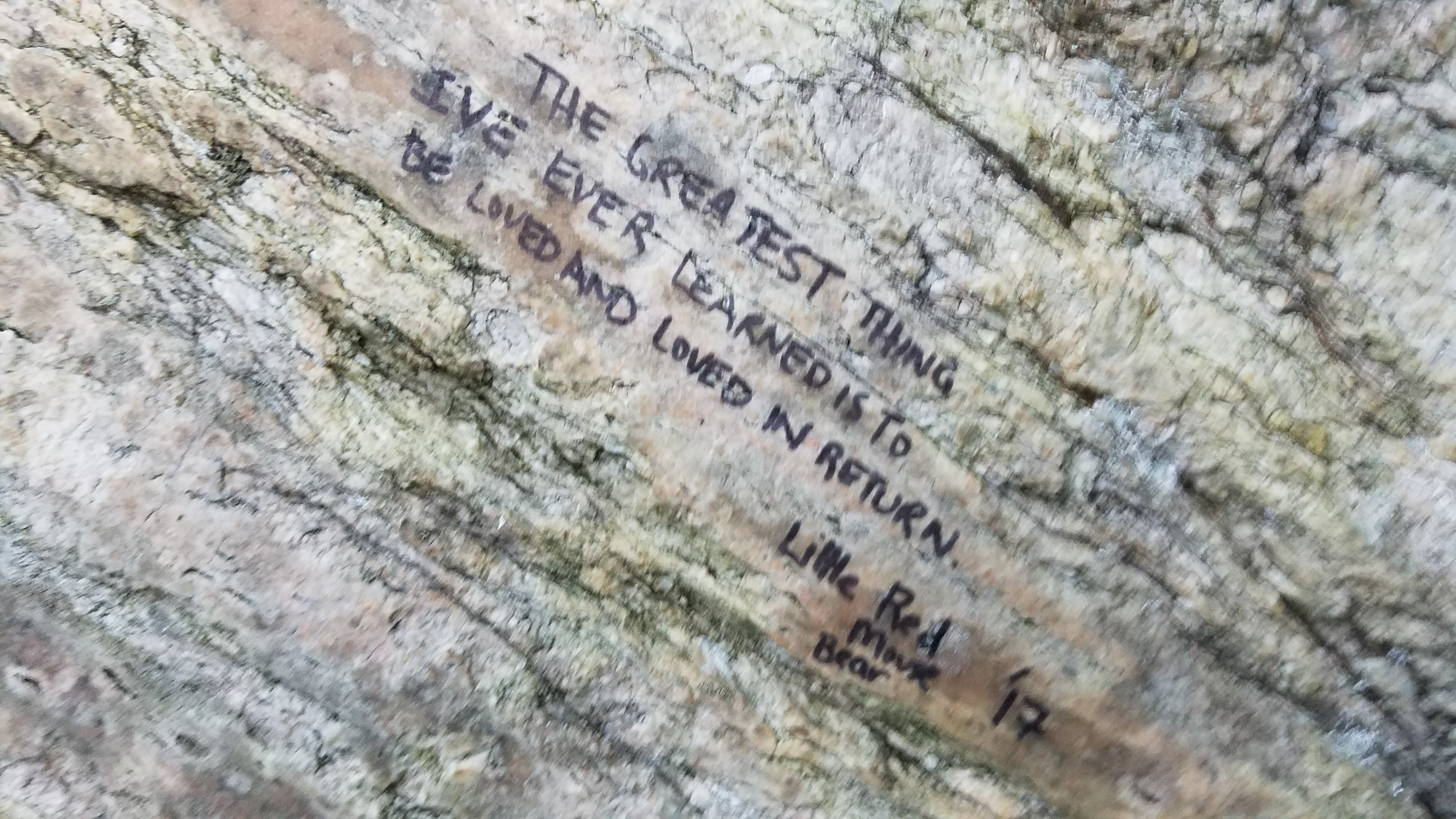 How similar this hike has been to grief.  I began, shrouded in fog and cold and isolation.  I stopped somewhere, and took stock of my situation, knowing that settling for the “easy way out” may often be the least rewarding and most destructive to the journey itself.  As I reached a high point, with a feeling of accomplishment and joy, I knew that it wasn’t the end of my journey.  I knew that there would be low points ahead, but that I had to march onward and upward to get to where I needed to be.  No matter how difficult or steep or long the climb out of the depths that lie ahead, reaching the high points makes it all worthwhile.  Even when I reach the high points, and linger for a bit, full of otherworldly joy and beauty, I have to eventually continue to march forward, quite possibly descending, stopping for a bit to rest myself, before continuing on to the next climb.

And I must refuse to settle, in order to make it over the humps that life after loss presents. 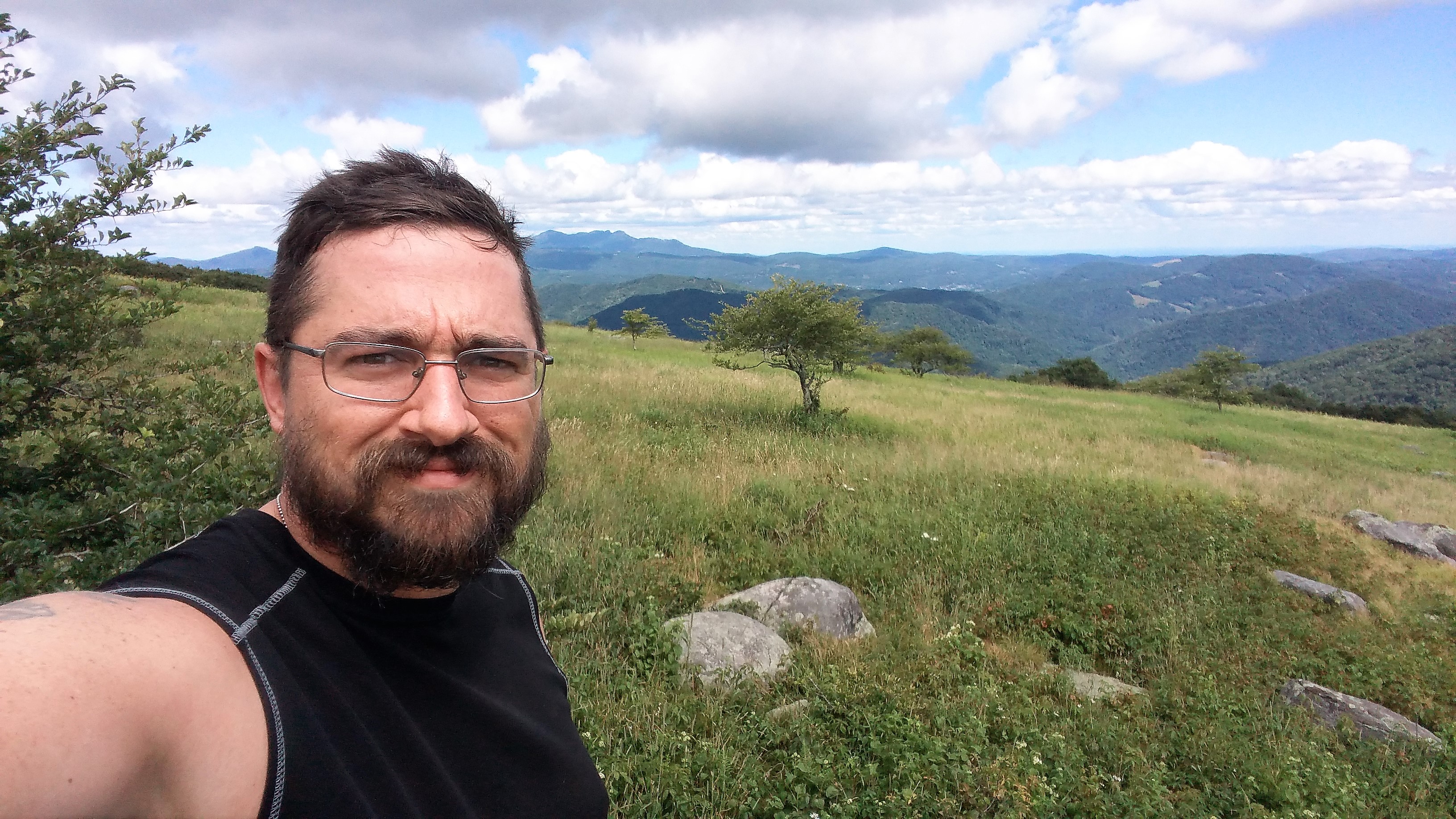