Like thousands of others, I went outside to look up into the Universe the other night to see if I could find Saturn and Jupiter joining to create the so called Christmas star. 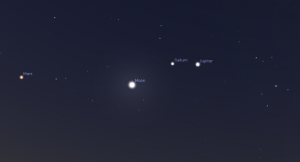 I have an app on my phone that allows me to point it at the sky and identify the stars and constellations and everything else, so I watched it happen with the app.

In between, I lowered my phone and searched out new stars as they appeared. I’m not a professional star gazer by any means, but the vastness of the Universe appeals to me, especially since Chuck’s death.

As I’ve traveled the country in these last 7 years, I generally will step outside my pink trailer once darkness falls, wherever I am, and study the pinpoints of light shining up above me.

Last night I turned in a full circle, searching for Orion’s Belt.

So whether I’m in Key West, which is the first place I looked for it mere months after Chuck’s death, deep in the heart of Texas, or in the overflow camping of Ellsworth AFB in South Dakota, l gaze up into the skies for it.

Chuck’s death disoriented me. Dislocated me. Displaced me. Internally I no longer recognized myself. Externally…well, I began my Odyssey of Love just 3 weeks after his death, traveling first to Taos, NM, then to IN, NJ for his memorial service, CT to spend time with our youngest son, which is where I bought my tiny trailer, finally heading south then west again. Most commonly, I’d stand in a new campsite, feeling panic, wondering what the hell happened to my life. 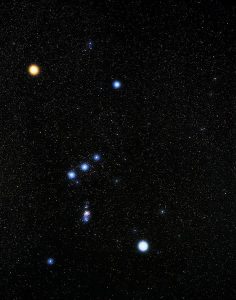 And I turn my eyes upwards. Millions of miles away as it was in my early time on the road, as it always is, it grounds me; those three stars are familiar companions to me wherever I am. In a way that makes no real sense, they are my guides.

I study the dark skies above me…wherever I am…and I wonder…does Chuck see me from out there? It’s one of the few times I talk to him, when I ask that question of the heavens. Do you see me? Do you know I’m down here, millions of miles away from you, trying to make it all matter? Doing my best to make this life without you have some meaning?

Even if I don’t know where Chuck is, I know where Orion’s Belt is. The constellation is just as bright a light for me as the so called Christmas star was for the 3 storied wise men centuries ago.

My Odyssey of Love has taken me to all 4 corners of our country. 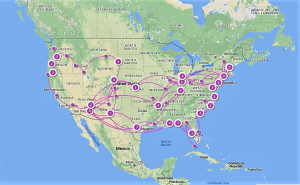 Highways, dusty roads, off the beaten path, through towns and cities, across rivers and lakes. I’ve camped 40 feet from Gulf waters and dipped my toes into the cold Atlantic, ambled campgrounds in Texas hill country…always somewhere new. Displaced in my heart because the man I called home is no more, but determined to keep going in whatever way I can and keeping my eyes on those stars.