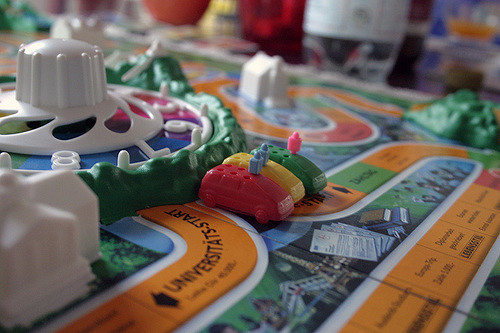 I’ve followed a somewhat standard path in my adult years.  Megan and I met in 2002, married and bought a house in 2005, and had Shelby in 2007.  Notwithstanding her illness and the extra events associated with it, we had followed a fairly “textbook” sequence of events.  We were effectively playing the “Game of Life”, spinning the wheel, and seeing where we landed.

We took vacations, attended school events, and explored new and interesting things in our city all of the time.  I worked a 40 hour week, with good benefits and insurance, and came home to my little 1/6th acre in the suburbs and mowed the lawn, had a beer, and ate dinner with my family.

The elephant in the room, through our entire relationship, was the fact that she had Cystic Fibrosis, and likely wasn’t going to make it to 40 years old.

Still though, we charged forward without flinching, as if tomorrow was never going to come.  As much as possible, we condensed an entire lifetime into 33 short years.  I’d be lying if I said I never thought about her disease and what it would bring about, but just the same, it wouldn’t have been fair to either of us to artificially cut her life short by avoiding moving forward.

We had discussed to no end the prospect of moving to a new home, always “in a few years”.  We wanted a bit of land, a larger house, and to be at least somewhat in the countryside.  There was always something that limited us though.  It may have been money, or Shelby’s schooling, or most importantly, her health, and the fact that she would need to be within an hour of a major transplant center.

Subconsciously, I figured that we would still be in our little house in Akron, Ohio, a few minutes from the hospital, and less than 30 minutes from our parents for the foreseeable future.  I’m fairly certain our parents felt the same.  It was never taken very seriously, because we had a young daughter and the illness hanging over our heads.

Things are different now.  Shelby is growing older (becoming more of a preteen every day), Megan’s illness has progressed to it’s unfortunate conclusion, and Sarah is physically healthy and more comfortable with being a mother to Shelby.  The subconscious, limiting factors to moving anywhere in the world are no longer present.  We could have a little cabin in Montana, hours from the next human being, or an apartment in downtown L.A. (never gonna happen, but it’s POSSIBLE).  We don’t need three or four vehicles as a “just in case” anymore.

Neither Sarah nor I care about “keeping up with the Joneses”.  Not that Megan did, but she definitely was more of a “traditional” sort of woman.  She wouldn’t have even considered moving to some backwoods hollow in the mountains, away from people, because she was most definitely a social person.

I’m not.  I never really was.  I can socialize, be friendly, and generally enjoy other people’s company, but I prefer solitude with my immediate family.  That is where a new complexity is beginning to surface.

Our parents have never had to be more than 30 minutes away.  Shelby has been accessible to them at effectively a moment’s notice.  If plans progress, it’s going to be difficult on them.  For the first time, I am really taking these plans seriously, and I can actually see it happening, and the guilt is starting to set in

Plans have been put in motion, such as selling one of the cars, towards moving. Sarah is spending much more one-on-one time with Shelby.  We’re openly talking about different places we’ve considered living.  Megan and I’s parents all see this, and you can sense in their faces that they’re uncomfortable.  They love Sarah, but the status quo has always been that Shelby is nearby.  That will probably change in the relatively near future, and I feel as if I am letting them down.

I’m struggling constantly right now to be an independent adult and NOT feel that way.  I’m trying to please everybody, but ultimately, someone else is going to have to compromise this time.  I’ve spent all of my twenties, and the first half of my thirties allowing illness and outside circumstances to dictate where I move forward in life, and I feel that I deserve the respect to make the decisions I want to make.  I’m not one to pull the “widow” card, but I’ll definitely pull the “adult” card.

But it doesn’t make the guilt go away, and that’s something that only I can adjust to in my own time.