June 12 is the date on which Lee and I got married. This year, as June 12 approached, I felt a bit uncomfortable at the thought that June 12 is our anniversary since Lee would not be here with me to celebrate it. Without her, I had no cause to celebrate June 12.

With these dark notions swirling about in my head, I decided to seek out the comfort of friends, and so, this past weekend, I went to Ohio to visit Bob and Linda. Bob is one of my friends from high school.  Along with Eric, Steve, Z, AP and Sherry, Bob is a charter member of the Frazier Thomas Band, our imaginary air guitar group named for a local television personality who served as prime minister to the King of the United States on a kids’ show called “Garfield Goose.” King Garfield was a goose hand puppet with a crown. Frazier Thomas’s role was to interact with Gar and his loyal hand puppet subjects and to interpret their actions and emotions for his young audience.

In addition, I was Bob’s best man for his marriage to Teri, who, like my Lee, died way too young. Most of us either remained or ended up back here, but Bob’s work took him on adventures to several places in a couple of different states. Bob and Teri had one daughter, Jordan. As our respective adult lives unfolded, there was a period of years when we were not in regular touch. This unfortunate pattern went on for too many years.

Bob and I reconnected at a high school reunion.  As between Bob and me, we simply picked up where we had left off, but our family circumstances had changed in the interim. By the time of the reunion Bob was a widower, and Jordan was grown up and a beautiful young woman. I learned that Jordan’s best friend is Jenifer. Linda, who is Jenifer’s mom, was divorced. It is not exactly “The Parent Trap,” but to hear the two girls brag, it appears that they did some similar scheming that helped bring together their single parents. The plan worked to perfection, and it continues to work beautifully to this day. Bob and Linda are happily married. The only other happy detail I can think to add is that Jordan and Jennifer have since each gotten married and have beautiful children of their own. Thus, Bob is now also known as “Papa” Bob in some circles.

By the time Bob and I reconnected I already was married to Lee. Over time, my friends had become her friends.  But Lee took an instant liking to Bob and Linda. I recall her telling me as much following the first time she met them. Indeed, in very short order, Lee and Linda became lifelong and best friends, their relationship made the more remarkable given the distances involved and the fact that they only got together a few times each year. I am grateful to have been able to observe this wonderful and rare friendship as it developed, but a little sad for Linda that her “bestie” has been taken from her too soon. Based on my own happy memories of the pleasure that Lee derived from her deep friendship with Linda, I am certain that Linda knows Lee loved her very much. As I look back, it seems ironic to me that Bob and Linda were not among the guests who attended our wedding.

So, this past Thursday, Lola the pup and I completed preparations for our trip. We traveled from home to Deer Tick Manor, our overnight base camp for the long drive to northeastern Ohio which reduced the journey by a couple of hours. Then on Friday we embarked for Ohio in the early morning hours. On Tuesday we returned from Ohio, arrived at Deer Tick, and I began to prepare today’s post.

This recent trip also marked the first time Bob and Linda met Lola.  She immediately charmed them, of course, most especially Linda, who happily indulged her. (Lola has a dog’s instinct for sniffing out the soft touches.) Lola was on her best behavior, except for destroying Bob’s straw hat, chewing the head off one the decorative pink flamingos that are a Bob and Linda landscaping trademark, devouring four bagels she managed to snag from a high kitchen counter, and running amok between houses to befriend the various neighbor dogs, causing them to commence barking while ignoring my stern command to “come.”  I am sure Bob and Linda are eager to have Lola visit them again real soon.

Bob and Linda and I swam. We rode bikes. We dined at a place called “Nemo’s” where two “French 75’s” left me and Linda slightly tipsy. We toured the Rocky River Reservation, visited its nature preserve, and took Lola to a leash-less dog park that’s part of the Reservation. Between meals out and our other activities, we discussed politics. By the end of our visit, I am sure that we had solved several of the world’s pressing problems. Bob and I played several sets of music in his “dungeon.” 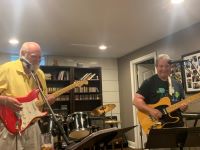 Linda even joined in occasionally, contributing a vocal or adding rhythm. One afternoon, Bob and I visited a waterfall and hiked over the rocks. 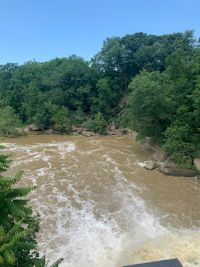 On another day we all enjoyed homemade ice cream.  I had pistachio in a waffle cone.

We even managed to find a dog-friendly eatery for Lola the pup. After lunch, the four of us visited Jenifer, Jack, her husband, and the grandkids, Margot, and Pete. It was a warm day and Lola quickly appropriated the kids’ wading pool for herself. 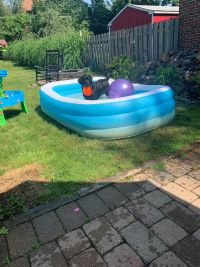 In her exuberance she bowled over Margot.

I had anticipated this event with some trepidation in the weeks and days preceding my trip to Ohio. I feared the occasion would be sad, or worse, maudlin. It was neither, however. At this moment each of us seemed to recognize that the best tonic to assuage our grief, that the finest tribute we could make to honor Lee’s memory, that the best celebration of our enduring friendship was to bask in the normalcy of life itself.  So we did.