As 5 years without you, edges its’ way ever nearer to me, and as my heart and soul hear the shuffle of time coming closer, creeping past, zooming closer, flying past..

As these ten thousand years have passed, since his death, as each nanosecond passes in the here and now, I remember how he loved me, how I loved him.

I remember his calm spirit and his groan-worthy jokes. I remember his dedication to the military and how glad he was to retire, having done his time. His quiet rebellions that grew from holding his own counsel and just going about business in the way he knew he needed to do. It’s easier to ask for forgiveness than permission, he told me many times, and that thought carried him through his military service. I remember how he not only read the Big Book of AA but read what it all meant, and the history of it; he gave context to AA and the 12 Steps and Tradition, and living a life of sobriety. Chuck lived his sobriety as honestly as he could, every day. Not perfectly, but as well as he could, and he earned the respect of many because of it.

His promise wasn’t given lightly, and I could count on his promises being kept. His promises were his word, given as a gentleman of old times would give his word. It was his honor, and he held true to it, whether that promise was made to me or one of our kids or a friend or anyone else.

He would, as knights of bygone days of chivalry and honor, have given his life for me. Sometimes, in my mind then, as he was living, and now, since his death, I’d picture the two of us strolling through shadowed hills of a glade, or the bare red rocks of the West, and, if this were times of old, he’d have my hand in his, and a sword in the other. It is as if, when he took his marriage vows, he not only promised to care for and cherish me, but to protect me with his body and his strong arm. And I can hear those who are less romantic minded, scoff at such imaginings, but here’s the thing that will make you secretly drool with jealousy…Chuck was that man. I knew he would protect me with his life. He was a lover and a warrior both, and I was the most fortunate of women to be his chosen.

His kisses melted my knees and left me desiring more. He was the loveliest of slow dancers, holding me firmly against him and guiding me around the dance floor, smiling down at me, sometimes humming along (in a voice that was kind of always off). He was the most passionate of lovers and I returned that passion in spades. We were well suited to each other in our strength and passions.

He was all that I’d never dreamed to be possible in the dark days of my first marriage and in my years as a single parent of 3… until it became possible one day when he knocked at the door of my mom’s house and I answered it, wearing my military issue ugly frame glasses and holding a book in hand with a finger marking my place. He remembered that moment to me often over the years. He loved when I wore my glasses, and he bragged to any and all about my reading prowess. Alison reads at least 50 books a week, he’d say.

And now my lover, my warrior, is dead. And I love him, am in love with him, no less now than when he breathed the air I now breathe alone.

If this is all that I will have for the remainder of my life…the memories of his kisses, his arms around me, his glances at me across a room, the feeling of swaying against him in a dance where only he and I existed…if all that I have forevermore is the memory of his body and mine twined together before sleeping…well, then, that is more than many, if not most, find, and I will be content in journeying back to those moments of ten thousand years ago, ten nanoseconds ago.

Memories don’t keep me warm at night, but oh, they are such memories and I hold them close.

Yes, I’m still in Love. It’s just that I’m in Love with a dead man. And my heart aches.

At the end of each day, after doing and being and connecting and engaging and interacting and peopling…at the end of a day, these memories are what I take with me…

As I quietly close my door~ 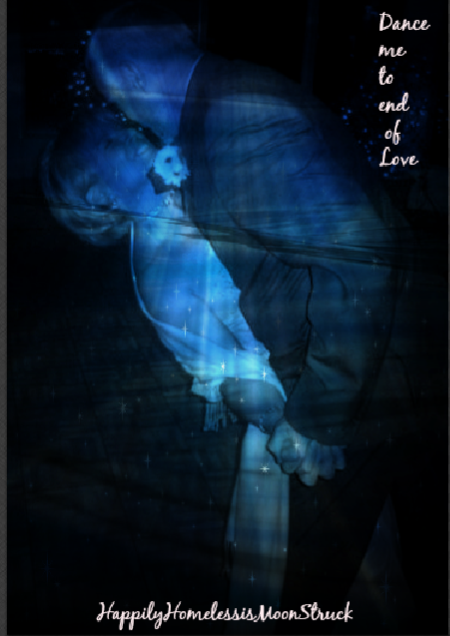