In the year after our twin daughters were born, we got a golden retriever puppy we named Charlie. Everyone always says they have, “the best dog ever,” but Charlie truly was. When the girls were young, they could pull on his ears, his tail, his fur, just about any part of him and he would never so much as complain, growl or groan.

Charlie became a fixture of our lives. He was part time babysitter, part time guard dog, part time walking buddy, part time entertainment, and part of the reason why we were constantly having to clean the house.

Charlie crossed the rainbow bridge in 2012 at the ripe old age of 13. He had “a good innings” as one of my best friends described it. But after having to put him down, because he was in pain and was suffering from numerous ailments, I could not stop feeling guilty about it. It haunted me. For the longest time, I questioned whether it was the right thing to do, if I had prematurely cut his time with us, if I had somehow let him down. That in some way I cheated him of a life and live I had sworn to give him.

I’m the years we had Charlie, we also gained a Monty and a Murphy. Monty, an English Cocker Spaniel, was a Christmas present for the family in 2005, and Murphy, a chocolate lab, was my 40th birthday present from Suzanne.

In the month before Suzanne died, we had to say goodbye to the one that had become her little buddy, Monty. He was 13-years old and had been diagnosed with cancer and kidney failure. For years before, he was forever getting little growths on his body (so much so, that over the years that I had taken to nickname him the “wart dog”)… Despite how smelly he was and how unkempt his fur became, he had never wavered I his devotion to Suzanne. He was her constant companion through the first two bouts with cancer, the surgeries, and the treatments. 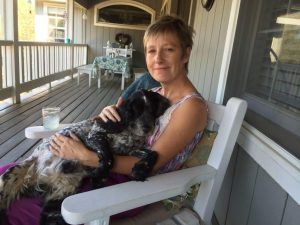 Losing Monty was a huge psychological blow to Suzi, just as she was entering her own final battle. At the time, we also had a cat named Harry, an 8-year old grey tabby, who had to be put down less than a week after we lost Monty (due to some rare blood disorder that caused an embolism in his spinal column). Harry was my little buddy, and losing two pets in the midst of chemo and doctor’s visits and other treatments… well, it was a time of great grief and loss. Unfortunately, with all the appointments and treatments Suzanne was undergoing, we did not have a lot of time, energy or headspace for grief or mourning.

But it wasn’t until long after Suzi died that I was able to grieve the loss of our precious fur kids as well as her. Yes, I often see people post things on social media about losing their pets, and after losing Suzanne, the loss of both Harry and Month seemed somewhat less consequential. But I know for some it’s like losing a child (especially for people who have never been able to have children). So their grief and the grief they feel about losing a fur kid is no less than that of what we feel when losing a person… and it took me a long time after Suzanne died to grieve my fur kids properly.

The unconditional love and affection that our pets offer has always been a source of both comfort and joy in our lives. When we love a pet, we can learn to love ourselves and our people better. In fact, it makes me think of the quote on a mug that my daughter has. It says, “I can only hope to be the person my dog believes I am.” And yet, we really are. Our dogs (and other pets) see us that way, and all we need to do is open our eyes and hearts and we can see ourselves that way.

Since Suzanne died, I still have Murphy keeping me company, but last year, I adopted a big pup. His name is Kohl, and he’s a bit of a handful.

Kohl’s a nearly two-year old German shepherd/lab mix who had been found wandering the “mean streets” of LA as a tiny pup. He nearly didn’t make it, after they sent him to a county shelter. But he was saved before he was put down, making his way to a German Shepherd rescue (where I found and adopted him). 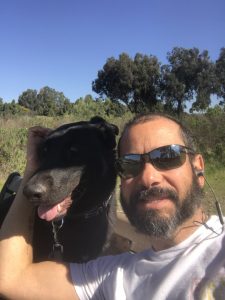 His companionship and unconditional love and gratitude for having a forever home have been a huge part of my own healing process. Maybe it was the fact he had been abandoned when he was so young and needed so much care and attention that made me a natural upright for his needs? Maybe it was because I was feeling abandoned and needed someone who could love me unconditionally like Suzi did? Whatever the reason, I found a kindred spirit in my new best friend.

The problem is, my older best friend—my now nearly 12-year old, Murphy—has suffered a little at the hands (paws?) of Kohl (far too much ear tugging, some serious roughhousing and a general tormenting). But they still look at me and I at them with a sense of knowing that there is so much love in our lives for each other. And that is what I sensed was needed in my life at the time I adopted Kohl. And now I also have a new person in my life; and she, too, loves and is loved by my fur kids as much as by my human kids and by me. Which makes this whole being a widower thing a little more bearable.

Having the chance to love again, and being shown the way back to a loving space through the unconditional love of a pet, has helped me heal. It has helped me open my heart again to the possibility of loving and being loved by a new person. And the person I have found is wonderful; and for the love I give and receive—and will get to give—to her, to my grownup kids and to my fur kids, I am truly grateful.