One of Julia’s best friends, whose family asked me very directly, some six months after her death, never to contact them again, turned up unexpectedly at my door about 10 days ago.  The door was wide open, and I only knew she was there because of the dog’s barking.

My instinct was to open my arms wide and embrace her – COVID or no COVID. I had seen her a couple of times in the weeks and months after Julia’s funeral where she had spoken bravely and poignantly of their friendship. It had been a shock, to me, to be cast out of her family’s life. When it happened, I did my best to “rise above” and responded, “I am saddened by your decision, and I respect it. And should your daughter ever want to be in touch of her own accord, I welcome her with open arms”.

I have never lost a best, childhood girlfriend. Don is the closest friend of mine to have died. He was special because of many reasons, but mostly because our special and purely platonic male-female friendship, one that lasted 30 years and that was safely navigated through our late teens, twenties, thirties and forties. Don is the only male friend I have had where there was such a depth of love, friendship, respect and recognition, and totally lacking in messy sexual attraction or advances. My friendship with Don, I later realised, was less about me and Don and our ability to “be loyal to our partners”, but more due to our respective partners’ trust – trust in us, and trust in the friendship. Mike trusted me, and he trusted Don. Dawne trusted Don and she trusted me. That is where the “enabling” of long-term platonic male-female relationships (in heterosexual people) rests. The male friendships I lost (those I can bring to mind) were down to girlfriends expressing jealousy, and my male friends dropped away in droves. I am still grieving the loss of male friendship, having lost Don, Ed and Mike, in such quick succession.  The other men I am “close” to either live a long way away and/or are crap communicators.

I digress. What I don’t know is what it is like to lose a best girlfriend. A BFF. Especially at a young age.

I am in a train heading to Lyon to visit my own childhood BFF, Nathalie, who lives in Boston, USA, and who is in France for a little while, visiting family. I wonder what it would have been like to lose her at age 15. To lose that friendship, to watch future plans and dreams evaporate, to not have the experiences we shared together, like inter-railing around Europe, or to lose the experiences we had separately but shared afterwards – like the first time we had sex, or had an orgasm, or gave birth, or experienced peri- and menopausal symptoms. And all of the other connective story thread and fabric that extends over 40 years, life stages, countries and continents.

I don’t know what it feels like to lose that kind of friendship. One that is even more embedded in early childhood than mine and Nathalie’s is. Julia and her friend were born 11 days apart and we were neighbours for many years before her family moved a couple of villages, and 10 mins drive, away. They had so many dreams and plans. They watched over one another. They were challenging, for sure, with more than a little wildness in each of them, that was fanned when they were together.

For the earlier part of their adolescence, it seemed like Julia had the stronger mental health. But how much of that was a façade? I don’t know. What I know is that Julia’s friend now carries enormous guilt and a sense of responsibility. For not being there. For not responding to the (later seen as “tell-tale” words, the night she died), “Je t’aime”. The guilt, the weight, of deciding that day to prioritise revision for her end of middle school exams, already postponed a couple of weeks because of a heat wave.

It’s too much to bear at any age, let alone 15, 16 or now 17. All the “what ifs…?” and “whys?” that remain unanswered. Unanswerable. That there can never be answers to. Until, perhaps, Julia and she, or Julia and I, find one another again.  It’s nigh on impossible to carry that load. Occasionally it has to be shifted. To be discharged. Deflected. Thrown at someone else.

On this occasion, she threw it at me. With insinuations. Blame. Criticism. Defensiveness. Anger.  Jealousy. And more.

You didn’t even select the right place for her commemorative tree! You don’t even know exactly where she took her life! (You’re right. I don’t. Perhaps you will show me one day. And that is the tree where some of her friends created a commemorative space on the first anniversary of her death)

You and Mike never fully accepted me into your family; you always treated me as “less than” Ben and Megan’s friends. (I am truly sorry that you felt that. It wasn’t intentional, and it was probably inevitable because of Mike’s lack of fluency and comfort in French). This would be me discharging the blame levied at me, and my own guilt, on to poor Mike.

Why did you get rid of Julia’s belongings? I wasn’t ready to come and look through her stuff when you wanted to give things away. And now I have nothing. Is there anything left? (Yes – I see that it was too early for you. I contacted you first, before all other friends. Almost everything except some very special things I wanted to keep have been given away. Come and see, and let’s see if there is anything that would provide you some comfort and that I can be without)

How could you possibly have started dating at that time? Julia knew you wanted to meet someone, and she was petrified of being abandoned. Julia knew you had met someone.  You could get another partner, but she couldn’t get another dad. (This one is so tough for me. I did know Julia was not ready for me to be in a new relationship. She had articulated early on, “you can always have another husband, but I can never have another dad”. Things with Medjool happened quickly, in May and June. I was waiting one more week so that I would have the three kids together and tell them together, about Medjool. And I would NEVER have abandoned Julia, as Medjool has not abandoned his own children who have also had challenging phases. What to do with that guilt, that not-knowing, that I too have to carry?

How could you not see that the hospital she was in was so appalling in its care of her? She was cutting, piercing, tattoo-ing…her so-called friends there were a terrible influence. (Ugh – and I agree, and I just felt I had to trust that she was safer there than at home, that somehow the effects of the medication and therapy would kick in). 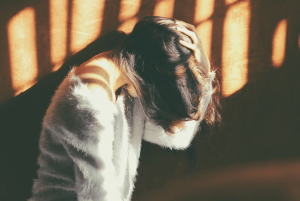 Image by Caroline Heza on Unsplash

All of the unknowns. The desire to be shot of all the guilt and remorse, the unanswered questions, the unanswerable wonderings. The pain – emotional, physical, mental – of just wanting her back. To see her smile and laugh. To share woes with. To make plans and live out dreams with. To talk of first kisses and periods and sex and more.

The gaping hole in her friend’s life. I know what a gaping hole is. How all-engulfing it is. How tempting it is to step into also. I feel so sad, so desperately sorry, for Julia’s BFF. It’s way too much to carry and hold. I will do my best to absorb what she threw at me, whatever else she might choose to throw at me, just because I am the older one here. But it’s so hard.