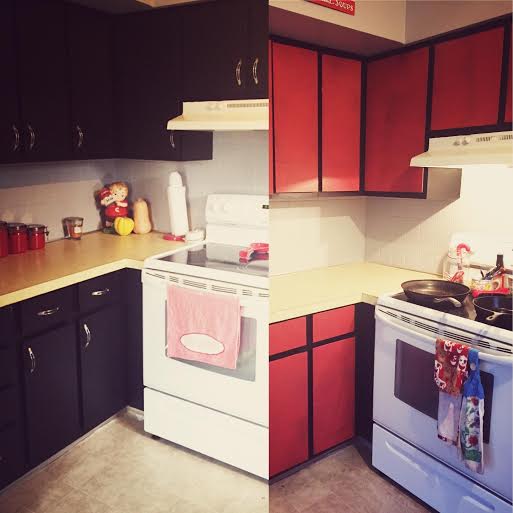 I bought my house almost 11 years ago.  It was our “starter home”, and Megan and I were married a month after we moved in.  We did what most couples do.  We painted the major rooms before moving in, and left some of the rooms for me to repair and remodel after we were situated.

Megan had a style of her own, that I was, being the husband, largely beholden to.  I didn’t disagree with her tastes, which could best be described as “Americana”.  It wasn’t mine, but I also didn’t find it gaudy or overly feminine.  The walls were painted in a natural tan, with deep red as an accent wall in our living and dining rooms.

Until a few weeks ago, I still hadn’t changed anything in the house as far as decoration, colors, or even the knick-knacks she had meticulously placed.  For one, I had no reason.  It was decorated…good enough.  Secondly, there was a small amount of resistance in me to any drastic changes.  This was our home, and any changes would make it feel less so.

Until I realized that this house had not felt like my home since the day she was admitted to the hospital.

Shelby and I live in this house, but without Megan here, it simply feels, to me, that we’re living in “her” house, rather than our home.  When I expressed this sentiment to Sarah, she suggested that perhaps, one room at a time, I change some things.

Starting with the living room, I took a few pictures down.  We went to the hardware store, and picked out a few paint samples, and brought them back.  Not one to be subtle, I decided that the deep, sultry red wall in my living room was to be a light, olive green.  Gone would be the americana wall hangings and figures, and my style would be a more natural, primitive, “woodsy” look.

In the kitchen, it was even more drastic.  From grey walls and black cabinets, I would be going to bright red cabinet faces with black frames, “peanut butter” tile, and a cream colored wall.  The Campbell’s soup figures, signs, tins, and other ephemera are going to be packed away or given to other friends and family.

Changing these two rooms alone has started a snowball effect.  I am ready to move on to more and more rooms with each stroke of a paintbrush.  I am finding that I do not feel as if I am painting over Megan’s legacy, or trying to cover up her existence, but rather, I am making my house feel more like MY home.   It is a matter of being honest with myself.  This house, at one time, was Megan and I’s home.  It is no longer, nor will it ever be that again.  The memories are still there, and paint will never cover those, but new memories have to be created as well.

In and of itself, this initiative is a memory.  Shelby is helping with the painting and rearranging.  She’ll be 9 in a month, and she’s old enough to have an opinion and lend a hand in what is also her home.  Sarah is also an immense help with all of this, in fact, she’s done at least the same amount of work as I, if not more.  Doing all of this together is something that I will never forget.

Rather than mothball the house for all eternity, as Megan left it, I am working towards making it my home.  Somewhat counterintuitively, each change that is made makes her feel less missing.  It was abundantly clear just a few weeks ago that her decorations, colors, and style were here, but she was not.  Making this house my own softens that sentiment.  Had she still been here, we would have surely been making changes anyway, and doing so myself is a way to honor her memory.

Instead of it presenting itself as changing all of the things she did before she died, it can now be viewed as all of the growth I’ve done since the since the same.