First, I want to apologize for not writing a blog post last week, in case anyone missed me…

As I write this post, I am hurting. Today (I am writing this on Wednesday August 19), I endure Suzanne’s second angelversary.

Two years ago today, the light of my life went out. It was the day that Suzanne left this earthly realm and became universal energy.

Today is the second anniversary of her death and at this very moment, I’m hurting. A lot.

That’s so many damned moments, it’s almost inconceivable. But as of the moment I post this, that’s exactly how long Suzi has been gone.

As I write, I vividly recall that moment exactly two years ago as I had my hand on her heart as it beat its last… it was exactly 1:13 am PST August 19, 2018. 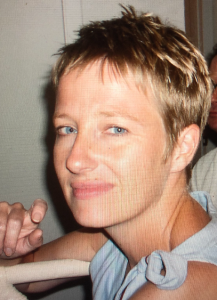 Oh, how much we grow and change due to the grief.

I found the perfect metaphor for my as I spent part of the day today at the beach with two of my three daughters.

As I walked the sands of the beach in Encinitas, I saw what appeared to be a rough stone tumbling back toward the ocean. I watched it roll over and over as the tide pulled it out to sea. Then, as another wave broke on shore, the stone was tossed inward and tumbled almost to my feet.

I picked it up and held it in my hand. It wasn’t a stone at all, but a brick.

As I held the brick, I studied it. It’s surface smoothed from endless tumbling along the floor of the ocean, before finally being dragged in by the tide.

I carried that brick a few hundred yards as I studied it, then felt compelled to toss it back to the ocean. As I thought about it, I felt like I had released some of my grief when I threw it back in to the ocean, and I felt lighter as I walked some more.

Then, I walked back up the shore towards where my daughters were laying in the sun. The brick had washed back in and was again in my path. Waiting for me. 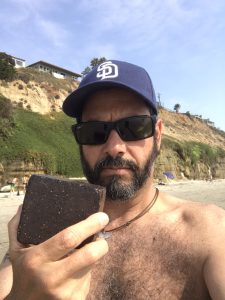 My grief is like that brick. I picked it up and carried it with me. Then, I tossed it into the ocean, hoping to lessen it and leave it to the forces of nature.

And it came back. This time, a little more worn, maybe even a little lighter than it had been.