Mike and Sarah share Sunday posts, as they are two widows who are in a new relationship together. Today’s post is from Mike: 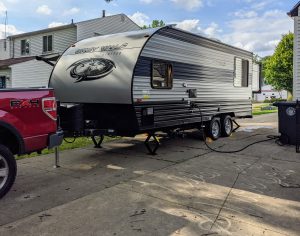 I’m writing this to you a few day’s belated.  It’s been 6 years now since the last time Shelby or I was able to say “Happy Birthday” to your face.  It’s been a blur.

With my work being so incredibly stressful, I almost forgot what Friday was.  You see, this project that I have going on there?  It’s probably one of, if not the most important project that I’ve ever been a part of in my career, and I’m managing it for the company.  They’ve given me the reins, and though I know I can manage it successfully, boy, do I not have faith in other people…so I guess little has changed on that front.

It’s not dissimilar from your birthday in 2014.  Constant phone calls, meetings, tasks, and trips to visit key people and make sure that they were doing what they needed to be doing towards the success of the project.  Although, the project then was to keep you alive.  We failed.  I didn’t trust any of them to have anything but their own best interests in mind.

That has to go a long way towards my current mindset.  Keeping you alive was the most important thing I’ve ever done, and I couldn’t make it happen.

But I digress.  Today (well, Friday specifically) isn’t about me or my issues.  It is a day to celebrate you, forget all of outside life’s stressors, and just be present in the family you helped build.  Even though the two of you have never met, Sarah baked brownies for you, under her own volition, without me even reminding her it was your birthday.  Those little things like that, even if I don’t seem to show enough appreciation, let me know you chose her for Shelby and I.  You would have been livid if I didn’t at least buy you a donut or something.  This woman goes out and bakes you brownies and gets you flowers, and all I can do is be pissed off at work.

There is one thing though that I will always consider your 39th birthday present…this camper.  We finally did it honey!  You and I talked for years about pulling one of these down the road, to wherever we wanted to go, with Shelby along, basking in the glory of having an available toilet.  No more digging a hole in the ground or coughing uncontrollably in the morning humidity.  It’s six years too late for those things, but you’ll still be along with Shelby, Sarah and I for every trip.

I wish that you and I could have at least done this together.  It was one of those goals that you and I had that we just never got around to.  I mean, we were close, but we never pulled the trigger.  I regret that.  Even if you only got to sit in it in the driveway, for you to see how excited Shelby is about it would have caused a grin from ear-to-ear.   Credit Sarah for finally getting us over that hump.  She manages the finances in this home, and was the person that made it possible to say “this makes sense” rather than “what do you think?”

So I suppose, in the grand scheme of things, the woman you chose for us to spend the rest of our days with is the same woman who got you “our” camper, baked your brownies, arranged your flowers, and even reached out to your mom on your birthday.  If only I could get her to come to work with me and manage my project.

She and I’s wedding rings were delivered just yesterday.  We tried them on, but ultimately, with this stupid virus, we had to take them back off again until it’s “official”.  I really didn’t know what to think or feel when that ring was briefly back on my finger, but it sure as hell felt comfortable.  I didn’t really want to take it off.  For the first time in almost six years, it felt like I was married again.  That content, “we can do anything” feeling I had, even though you were lying in a hospital bed on a ventilator.  The “nothing else matters” thought.

I guess, to wrap this all up, I really just want to say how much I miss you.  How I wish you were here to see this camper, to talk me off of the cliff with my job, to see Shelby so excited, even as a teenager, wanting to spend time with her parents.  To smell some flowers and eat some brownies with us.