He died on a Tuesday. I can still remember screaming those animal sounds into the phone, tones I’d never heard come out of myself. Deep, guttural defiances… yelled at his dad on the other end of the line – every cell of me rejecting the words from his broken voice, “No baby, he’s not okay…” The room is spinning. I remember flashes only. I remember pacing like a caged animal in the shock of it all, and coming back to the bedside where I stared at one of those old-timey pictures of us on the wall, in a teal frame, which I’d hung only days earlier. Suddenly, I am in the hallway, down on my knees, screaming still. Then on the floor, in the bedroom, calling my best friends, the first words I say, over & over, “You have to come over. You HAVE to come over!” followed by barely breathing words, “It’s Drew. He was in a crash…… he… didn’t make it…” I am lost in space. Gasping. Grasping at anything I can, but nothing exists. I am plummeting through an empty black void – a vast nothing. It is somewhere not earthly. In the explosive event of his death, I have left my body too. It is 8pm, June 12, 2012. I am 29 years old. And the love of my life, my future husband, is dead.

It was a helicopter crash. He was working his first big contract up in Washington state doing agricultural flying. He was supposed to be gone for 3 months, but in the first week, while riding along with another pilot to scout out the job, the pilot hit a power line and they went down into a tree. Drew was killed almost instantly from a severe blow to the chest. I don’t have to tell all of you how terrifying and disorienting those first weeks were… how lost I was.

In the weeks before he died, we talked excitedly about the future and about getting married. I found the ring just a week before the crash and I later found out… he was planning to propose to me as soon as he returned from his trip. Although he never had the chance to propose, one night on the phone that week, he said to me, “what if I were to ask you soon?” I did the usual ruining-of-the-moment by trying to be logical about planning and coordinating… and then I stopped myself, and said with all the love in my heart and a big smile, “Whenever you ask me, I will say yes.” I  could hear his smile all the way from Washington to Texas, it was that big. That is why, although we never got to the true proposal, I will refer to him as my fiancé.

For a month I stayed with his family near Austin. I tried to go back home to Dallas,  go back to work and routine. I made it only 4 days. Routine wasn’t helping me like people said it would. I was already unhappy at my job and could not see how I could ever deal with that on top of all my grief. I had friends, but no family in Dallas. I knew in my heart that staying wasn’t right for me. I could feel him telling me to leave Dallas… not to run away from it, but to run towards what I needed, family.

This was not my first run-in with death. I lost my Mom to breast cancer when I was nine, and my Dad to heart disease when I was 27. Being without my parents at such a young age has influenced and colored every aspect of my life and who I am. With my siblings also living far away, I’d become part of Drew’s family pretty fast. So after he died – when they told me to come and stay with them at their ranch near Austin – it was a no brainer for me.

Within 3 months of his death, I quit my job, rallied all my incredible friends in Dallas to help me pack everything into boxes and get it into storage, piled my two cats and a carload of essentials into my hatchback and left Dallas in the dust. I got a part time job at an art gallery in Austin, which was something I’d always wanted to do. It was easy work that surrounded me with creativity and art and amazing people. It helped.

In the rest of my time, I did a lot of what I did when I lost my parents… I made art. Hiked around in the countryside, wrote endlessly, took a lot of photos, sat and stared quietly sometimes for hours at the hills and trees. I started painting for the first time in my life, and found it helped me to express some of the pain. I started selling some of my art here and there and showing it at a few galleries and shows. I started my Our 1000 Days blog to record my journey and our story. I listened to all kinds of music from classical to heavy metal, and took some art classes like welding and clay sculpting and jewelry-making. I went to a lot of art galleries and festivals just to be around art. I found that exposing myself to new things – whether appreciating art or watching documentaries or making things in a class – helped to give me a break from the emotions and helped me find some way to still see the wonder in the world. Sometimes, like with painting, it also ended up being a way to get some really deep emotions out. Art in all its forms has saved my life.

I don’t know why I decided to change everything after he died, except to say that for me, that life died and I no longer had any desire to try and continue it. I wanted his death to change everything. I wanted it to propel me off into some completely alternate direction, some big great unknown. I wanted it to help me take the chances I never took, and try the things I never tried. I wanted his death to alter me beautifully and exactly as much as his life did. I realize this may not be the usual way people deal with this sort of thing, but I guess it is just my way of making some meaning from it all.

This pretty much brings us up to now. The gallery I’ve been working at is closing in just a few weeks, so right as I am beginning to write to you, there is another part of this journey that is ending. It’s pretty scary, as that had become some part of my new normal… and other than doing some design work for my mother-in-law (although I am not formally their daughter-in-law, it’s just easier for us all to refer to each other this way now, and so we do), I really have no steady income and no concrete idea where my life is going to go from here. It’s all wide open.

But I have some ideas. Before he died I had only dreams of being a writer and an artist and making a different in people’s lives with my creativity. Since he died, I have dropped everything to pursue those dreams (albeit at a snails pace, because I’m also dealing with the grief). I have sold some of my art, written many pieces that I am very proud of, and gained a great deal of confident in myself as an artist and someone who can help people. That’s a big thing for me to admit… because honestly, deep down, there is still a part of me that doesn’t believe I am big enough to ever help anyone. But slowly the part of me that knows I can is gaining momentum.

I have no clue how anything will unfold in the next year or two or ten. All I know is that I’ve lost my mother, my father, and the love of my life, all before the age of 30. I’ve been dealing with death and grief and learning to live through it for over 20 years already, and I’m only 31. I’d have to be a complete idiot not to take that as a sign to help others out somehow. So I’m setting my compass there and letting go, trusting that someone out there – perhaps a particularly handsome pilot I know – will be guiding me. 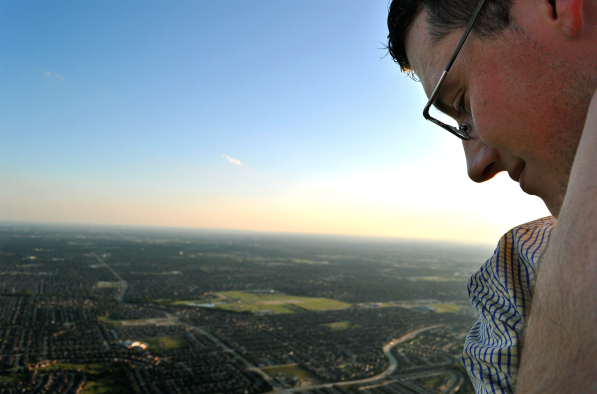