Chuck wouldn’t want you to be sad.

Don’t you think Chuck would want you to be happy?

We’ve all heard this inane statement. This inane question.

It doesn’t always come from the un-widowed, either. I see it frequently in the widowed community.

What a pain to listen to others speak for someone they don’t even know.

I remember, a couple years after Chuck’s death, I was in a 12 step meeting and a guy who’d known Chuck asked me how I was doing. I responded that I was in a shitload of pain, my heart hurt, and I missed him with every breath.

It isn’t that this guy didn’t have good intentions. I get that. Yadda, yadda, yadda.

Of course his response was that dreaded question…starting with wouldn’t he….?

I very kindly responded that Chuck didn’t get a say in it, what with being, you know, dead, and when he was alive I wasn’t happy all the time either, so there’s that.

Clearly this man was a bit frustrated with me because I didn’t just say thank you and move on, so he asked me well, what would Chuck say if he were here?

I know exactly what he would do, I said. He’d listen to me, and then he’d wrap his arms around me in a hug and just hold me and be silent.

Here’s the thing, folks, when it comes to Chuck and dead Chuck and my grief and my shattered heart and my struggle to make meaning out of something so bullshit as him dying…

If I see Chuck when I die…and I have no expectation or belief that such a thing will happen…but if I do get that incredible opportunity, and after I’ve knocked him to the floor with the excitement of seeing him again, and handcuffed him to my side so that we’ll never be parted again…

I’ll look straight into his green eyes, unflinching, and tell him you know what? Look what I did even as I grieved for you. Longed for you. Died for the wanting of you. Look what I did. And I’ll grandly sweep both arms in the direction of the earth…I’m assuming I’m up in the clouds or in the star studded sky somewhere…giving him a glimpse of PinkMagic, and the pink sequin tailed coat and pink top hat that I wore as mourning clothes, and the names of thousands of people written on my rig, and I’ll map out to him all of the roads I traveled on my Odyssey of Love and the many times thousand hugs I gave and received, and he’ll just stand back and look me over with that glint in his eyes and a smile will tug at his lips and he’ll shake his head back and forth, proud as a peacock, not surprised in the least at any of it.

What I’ve learned about grieving in these 7 godawful long centuries since his death, is that it isn’t at all about how much I grieve. Or if I’m happy or not happy. Or joyful or not joyful. None of it.

It’s how I’ve carried this grief. How I continue to carry it. And how I will always carry it.

Because I know, and Chuck will know, that I have braided grief and Love into a beautiful Love knot. One is the other and the other is one. Woven gently and fiercely together. Unbreakable. Unshakeable. 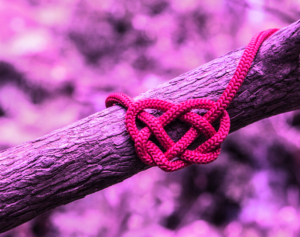