As I answered, awakened from a deep sleep I had only fallen into three hours earlier (because as I came to bed I discovered a roof leak coming through the ceiling right outside my master bedroom), I could hear crying. It was my oldest daughter, Rachel, crying. 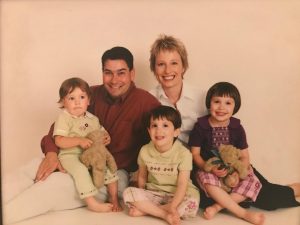 Our family… 20-years ago. Before cancer. Before death. Before being alone.

In that moment, I can’t tell you how much it hurt to be alone.

Now, as a lone parent—the only parent—for three adult daughters, I answer the late-night calls. I act as the font of all knowledge. The rock. The dad.

The call would have been difficult for them whether Suzanne was still alive or not. Regardless, it was even more difficult without her. It’s a freaking nightmare. Day-in and day-out, I deal with all their anxiety, fear, stress, worry, anger, frustration and a myriad of other emotions.

The reason for the call? Rachel’s fur kid, her dog Thor, was not well. He was vomiting all over her house, he was acting weird and he was not his usually happy-go-lucky self.

Thor is a special needs dog. That’s not a joke; he is. He was born with a cleft palate and it complicates his life in so many ways. Normally, he would have been put down as a pup. But my daughter, who is the most authentic, loving, kind and compassionate empath you may ever meet, fell in love with him when she saw his picture on a rescue website.

Thor had been spared death, but needed to be homed in a loving, nurturing environment—one where he could be supervised. He had a penchant for picking up rocks and running around with them in his mouth. He occasionally forgets to spit them out.

Last night, or perhaps sometime over the weekend, he had forgotten to spit out not one, but two. They were lodged in his intestine and colon. He was one very uncomfortable dog. And he was making Rachel very frightened. They took him to the vet at 3:15 AM and it was after the initial discussion with the vet tech (from the car in the parking lot, thanks to the Coronavirus) that caused the tears and prompted the phone call.

Fortunately, my two oldest daughters (they’re twins) live not far from each other in Northern California, so Laura had been able to come over and pick up Rachel and Thor to drive them to the emergency Vet clinic, since Rachel was in no state to drive.

As the Dad, having feared the worst was happening in the middle of the night, my sense of overwhelm and emotion gave way to “dadly” advice. “Leave the dog at the vet and go home and try to get some sleep. The vet will take care of the dog and hopefully, he will get rid of both rocks on his own.” (if you get my drift…) 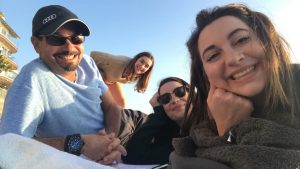 Our family now. No mama. Just a dad and his daughters…

The call in the middle of the night is one every parent dreads. Every parent. This call was about the dog. Could it have been worse? Absolutely. Was it the worst? No. Did I handle it as best I could? Maybe. Did I instantaneously wish the moment I hung up the phone that Suzanne was there with me to help me cope and calm down? You’re damned right.

It is hard as a parent. And getting a 3:49 AM phone call would have been difficult regardless; but without their mama here, it was even more so. And that was the real freaking nightmare.