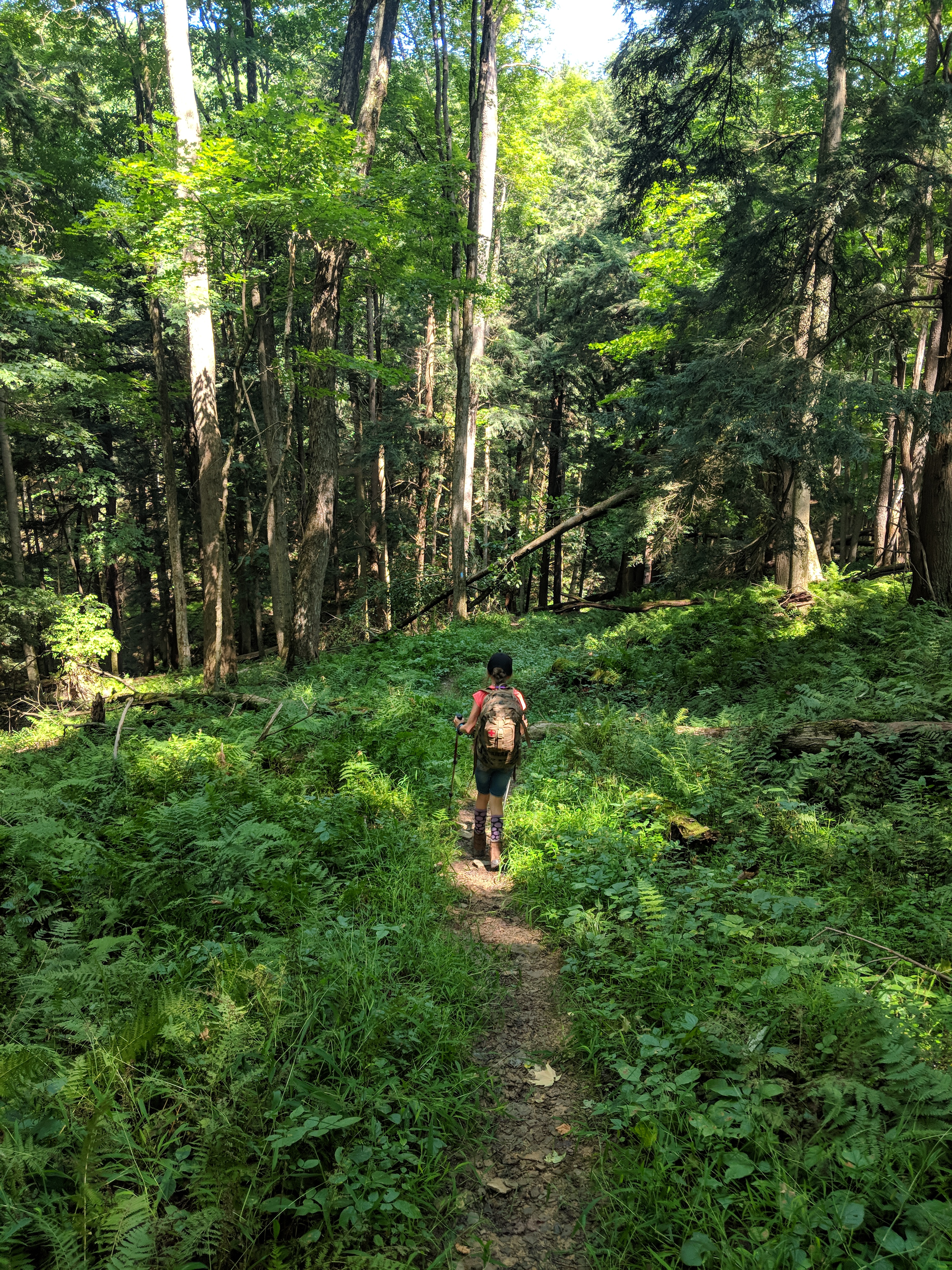 There were so many reasons for Megan to be proud of Shelby.  From her sheer intelligence, to her love for reading, to even her quirky weirdness.  She appreciated that Shelby had a love for nature, at least tiny animals and flowers.  We would take Shelby camping at least once a year, but due to Megan’s condition, that was the limit.

We took one “backpacking” trip as a family.  Shelby was about 5 years old, and carried nothing but a few stuffed animals and granola bars in her pack.  Megan had received her transplant, and thus was just healthy enough to schlep some weight and contribute to a one mile hike into the wilderness of West Virginia to camp.

I was proud of Shelby at that point for her enthusiasm.  We hiked in a thunderstorm, to a small patch of territory in the middle of nowhere, and she loved it.  There was no apprehension about not having four walls, light at the flick of a switch, or running water.  She, like me, actually wanted that lack of modern conveniences.

Since Megan’s death, Sarah, Shelby and I have taken a few more “easy” trips.  Each has had the same effect of me being proud of Shelby, although I’ve had to be proud for both Megan and I.  She’s still been carrying a very small load, considering there were two adults to shoulder most of the baggage for her.

A big first happened this past weekend though.  Shelby and I took our first trip together, just the two of us, and she started carrying some of her own baggage.

This sounds simple.  Shelby has gotten bigger, stronger, and older, so she is physically able to carry more weight.  There is much more to the story though, in that it’s a metaphor for the mental weight she will be carrying the rest of her life.  Her mother is no longer around to carry her through tough climbs. I verge on pushing her a bit, carefully choosing the items she carries, testing her limits, and encouraging her to power through the steep parts intelligently, rather than stopping.

I am happy to say that on our hike, there wasn’t much need to push.  She charged up the hills of Allegheny National Forest in Pennsylvania.  She observed each and every salamander, frog, flower, and even a bear and a coyote, without flinching.  She took in all her surroundings, knowing where she came from, knowing where she was going, carrying her weight, counting her steps, and taking pride in herself.

I let her plan our hike.  I let her decide that we would push on an extra few miles to a lakeside campsite, rather than calling it a day on a shady knoll and finding the “easy” site.  I let her set the pace, all the while just staying back and watching her glide along the trail.

She’s growing up.  Though I’ve tried to include her in planning and being the “leader” of things in the past, this has been the first time she did so with gusto.  It’s the first time that she was consciously aware that she was “in charge”, and that I was just there to lend support. She’s still feeling it all out, and there are a multitude of tiny things that I still had to be the adult about.  I needed to instruct her to drink water along the way. I had to remind her not to run up a hill during our hike, lest she burn her legs out halfway through the climb. There were even a few times where I had to gently push her into making a decision for both of us, such as where to take a break or when to make dinner.

Shelby was much less accepting of just letting me run the show and deferring to my decisions though.  Her decisiveness and judgment are traits that are beginning to develop, and this trip demonstrated that.  They’re values that will serve her well in the near future, as she starts middle school in 2 days. Her emotions about her mother’s death will be kindling over the coming years, and it’s a weight that she will be well equipped to carry.  She will always have Sarah and I to support her when she is simply incapable of hauling a load, but as she begins to shoulder more and more of it, she can have pride in herself, and the confidence to choose the best path.

I’m evolving myself.  I’ve learned to step back and let Shelby take the reigns sometimes.  Her own leadership qualities are becoming more outwardly visible each and every day, and I’m confiding in them more than I ever have.  I am a bit egotistically proud of myself for bringing her up to this point, where I can let an eleven year old decide where I’ll be laying my head tonight, after a five-mile hike, knowing that it will be a great decision.

More than anything, I know Megan is proud of the both of us.  Mostly Shelby, I’m sure, because really, I’m just kind of lying back and carrying LESS, while Shelby is taking on more.  Ultimately though, we’re both climbing these hills with joy and love for them, carrying our baggage, and knowing that the payoff isn’t just the lakeside campsite and a big dinner, but the journey itself. 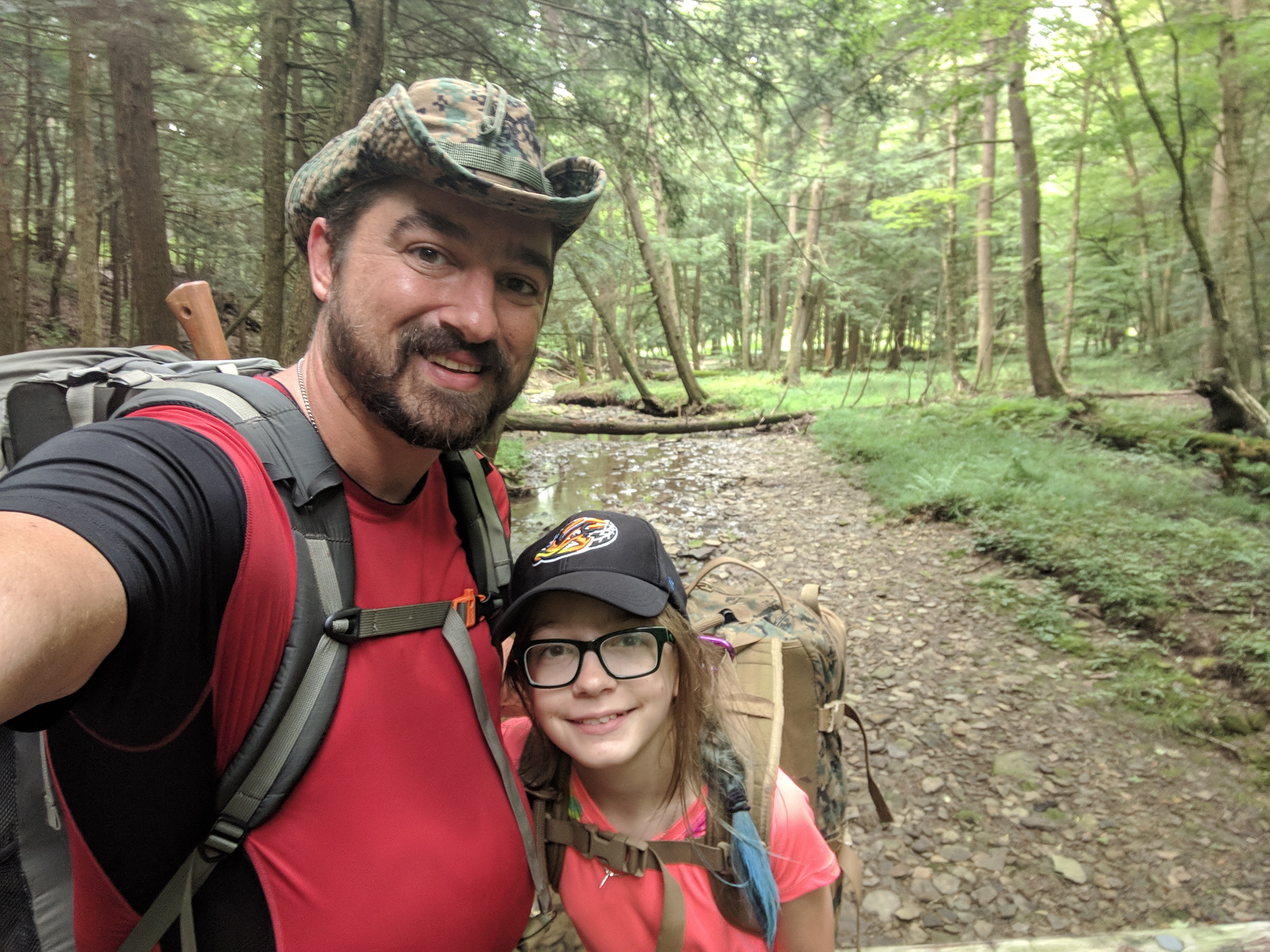