Today, as I write, Sunday 10th May 2020, it is Mother’s Day in North America. And, closer to home, in Switzerland too. The day during which, in former times, people congratulate mothers on being mothers. People bring their mums flowers, make them a meal, take them out for a meal. Or just call them and perhaps send them a card.

My own mother had a bit of a tense relationship with Mother’s Day. At some stage, when I was an older teenager, I remember (my version of memory) her saying, “Don’t be wishing me Happy Mother’s Day. It’s not important to me. I don’t want to be recognised just for being a Mother. I am so much more”. I know she was right, AND it felt like a rejection as well. I didn’t take it too personally but part of me interpreted it as her five kids not being all that important to her. Or at least not her major life’s work.

As we five kids left for various corners of the globe, I learned that Mother’s Day was celebrated on different days at different times of the year. When I would remember to call my mum, or send a card, she’d seem surprised, claiming that it wasn’t Mother’s Day where she lived. It still felt like a minor rejection, but I do know that she was right, technically, if nothing else.

Mother’s Day in the countries I have “close contact” with (France, Switzerland, the UK and the US has Mother’s Day dates this year ranging from 22nd March to 7 June 2020. That’s three months of Mother’s Days. Time to get a card in the post for sure and hit one of them, more or less. And time for plenty of confusion. Misunderstanding. Triggers And potentially collateral damage.

Today, one of my widbuds in the US, remembers how his fit and healthy wife went for a swim in their local pool on Mother’s Day three years ago while he and his sons prepared a special lunch for her. She had a major brain aneurysm while swimming, and a few weeks later died having only briefly regained consciousness in the intervening weeks. This was a family unit that actively celebrated, honoured, revered their woman on Mother’s Day. I know Mother’s Day remains full of triggers for him today, regardless of the actual date his wife died. I wish I could give him the massivest hug. For sure I will be toasting him and his cracker of a wife later today.

Sometimes we feel we know each others’ spouses, such is the ease with which we feel we can share stories, memories, dreams, yearnings. That talk is allowed. Encouraged. It’s about the only place it is. Hallowed be their name.

I am in that last category. And at some stage I will be in the first as well. That’s an awful lot of us. All stages and ages. All kinds of Mother-Child relationships. And spousal relationships too.

Another US-based buddy sent me the most beautiful picture this lunchtime, as he got up in his Florida morning. A black and white photo of a mother snuggling her baby. I wondered momentarily what had brought about this gesture, then realised – or at least assumed – that he was remembering me as a mum who had lost a child on this North American Mother’s Day. My brain was slow though because it’s not Mother’s Day in France.

I am glad to be remembered, just because people’s gestures, people’s rememberings, people’s reaching outs, matter. He’s recently lost both of his own parents. And he has married a widow and adopted her kids. So he gets the full death and grieving and loving and living tension better than a lot of people I know.

So I am a mum to be remembered and honoured too, because of Julia’s death. I feel somewhat protected. It’s not Mother’s Day here in France. I had to look up when it is. 7th June. If shops are open by then I know I will see lots of reminders, flyers, posters, adverts. My alive kids are unlikely to do anything about it, (though I am wont to remind them).

Mother’s Day is more important to me than I believe it is to my mum. I still send her a card or a book most years, just on principle. Yes, I am a mum, and she is a mum, every day of the year, so why mark out this particular one? I get the ridiculousness of that. And the cynical side of me goes, “Bah, Hallmark!” And yet, the idea of being just a tiny bit thanked, remembered, revered, acknowledged, feels important. It’s not about gifts and cards. Or even gestures of meals. Just the acknowledgement of the relational bond.

I quite like there being multiple versions of Mother’s Day because when the local one comes around, most of my community is unaware and I don’t get too triggered. My kids are usually away in a different country at that time of year, and they have long left primary school where teachers ensured kids went home with a hand-made gift. Of which I have many. So many. All beautiful. From three kids. 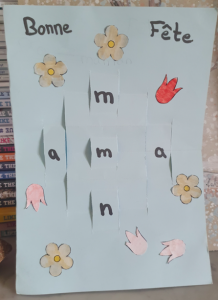 So it was a surprise this year when Megan came home as France went into lockdown and gave me a set of “toast tongs” so I would stop burning my fingers as I reached in the toaster for my pieces of toast. That was back in March. A delightful and surprising gift. I was grateful. And tickled pink, not least because it was so unexpected. British Mother’s Day wasn’t particularly on my radar. Those toast tongs served as my birthday present also, a few days later. I like useful gifts. I use the tongs most days. I used them today, on Swiss and North American Mother’s Day. 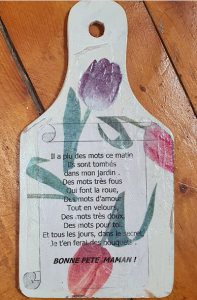 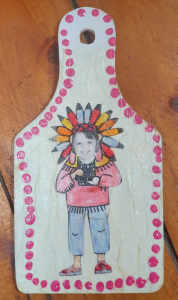 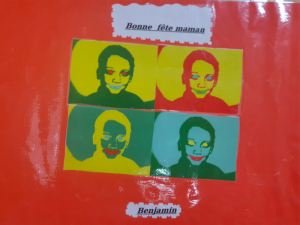 Post Scriptum: And just as I was posting this and adding the photos, along comes a very heart-warming message, from the young woman I call my third daughter. And I think she calls me her second mum. Mike was very definitely her second dad. 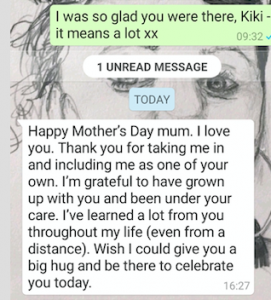 Thank you Kiki. Your message brings tears to my eyes and heaving to my heart and strangled sobs to my throat. Perhaps Mother’s Day matters to me more than I realised.