I have very few physical objects that have survived my 61 years, or my full time life of travel for the past 11 years.

Except this one thing. 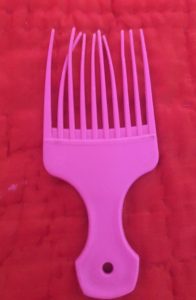 I bought it back in the 70’s when I got my first perm. I was only 19 and I knew nothing about hair care, so I didn’t trim the perm and it ended up growing into pretty much an blonde afro.

This pink comb saw me through 10 years of marriage to my first husband who was an abusive alcoholic. It sat in its’ place on the bathroom counter, as I twisted and turned my body in the mirror, trying to see the bite marks he’d left in his last attack.

I’m trying to remember what my hair looked like when I divorced him; it was a long time ago, and I took my 3 kids and that comb, along with a few other things, when I moved in with my mom in NJ.

It removed the knots in my hair as I learned to care for myself again, going to Al Anon meetings and finally finding AA and getting sober.

How is it that this pink pic comb never got lost, when so many of my other belongings did?

Where was it, and what was my hair doing when I met Chuck? I do remember the ugly brown, military issue, glasses I was wearing the first time he knocked at the door and I opened it to find a man dressed…and well-dressed, I might add…in his uniform camos. 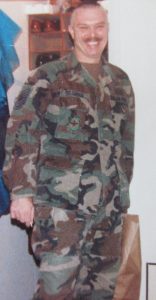 It sat on my bureau as Chuck disappeared for weeks on end, somewhere in the world, sent by the military, unable to tell me where he was going or when he’d be back. I fiddled with the tines on the comb as I watched on TV for the hot spots around the world, wondering if he was in the thick of it. Wondering if he’d come home alive.

I do remember needing it to pouf my hair when I dressed as a belly dancer to go to a SCUD party at the end of the first Gulf War. Chuck didn’t have to go on any more top secret missions after that. 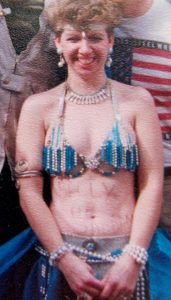 It came in handy when we married in a house that had formerly been a chapel and he wore his dress blues and we were so in love with each other. So amazed that we’d found each other so that we could create a Love story together.

Blended family years. Me handing the scissors to my stepdaughter and asking her to cut my hair. I didn’t need the comb after that. I looked like a boy with a really bad hair cut.

How on earth this .25 pink comb traveled with me and Chuck as we sold everything and began our Happily Homeless adventures, and never got lost, will always be a mystery to me. But it went with me and came in handy again when I asked Chuck one day to dred my hair for me.

It especially came in handy the night following the day where he’d spent 7 hours dredding my hair but it was uncomfortable for me to sleep on so I kind of woke him a bit from a deep sleep and asked him if he’d mind if I took the bottom dreds out and he, in a noncommittal voice said do whatever the fuck you want and went back to sleep and I spent the next 5 hours in the bathroom undredding all my hair and handed him a pair of scissors in the morning and asked him to cut my hair into a bob. He didn’t say a thing in response. Just smiled and took the scissors and made my hair look beautiful and sexy.

I didn’t need the comb after he died. It took only his razor and a pair of scissors to hack at my hair, needing to remove the minimal weight of it on my head by shaving it bald. It really wasn’t the weight of my hair though. I just needed to do something violent to somehow manage the intolerable madness of the grief and rage that was burning a hole in my gut. I asked our daughter to bear witness to this act. She watched me in shock, and probably some horror, and loved me through it.

Over the window on the inside of my pink trailer is a narrow ledge, and that’s where I stored my tiny pink pic as I began my Odyssey of Love. 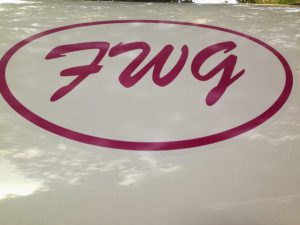 It’s stayed with me now for 7 years on my own on the road. I shaved my head again at one point, dredded it twice, and it’s always been there and available to me. Every so often it won’t be where I look for it and it may stay gone for a few months, but it always shows up again.

This pink pic has been with me for over 40 years. Through a really bad marriage and a spectacular, passionate, marriage. 3 kids. War and deployments. Sobriety. A 4 year traveling adventure sitting one foot across from the man of my dreams. 2 cancer diagnoses. Hospital to hospice to memorial service to a pink car and a pink trailer and creating community and connections for myself driving the roads Chuck and I drove together in another lifetime.

My hair has been wrapped in colorful scarves, covered by flowered hats, shaved, inexplicably grown out as curls, gone slightly gray, colored varying shades of pink, dredded…and all the while, this pink pic has stood ready and waiting.

It’s just the damndest thing ever~ 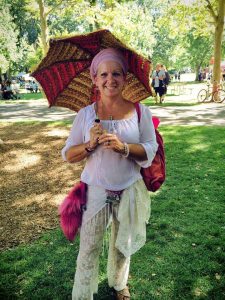