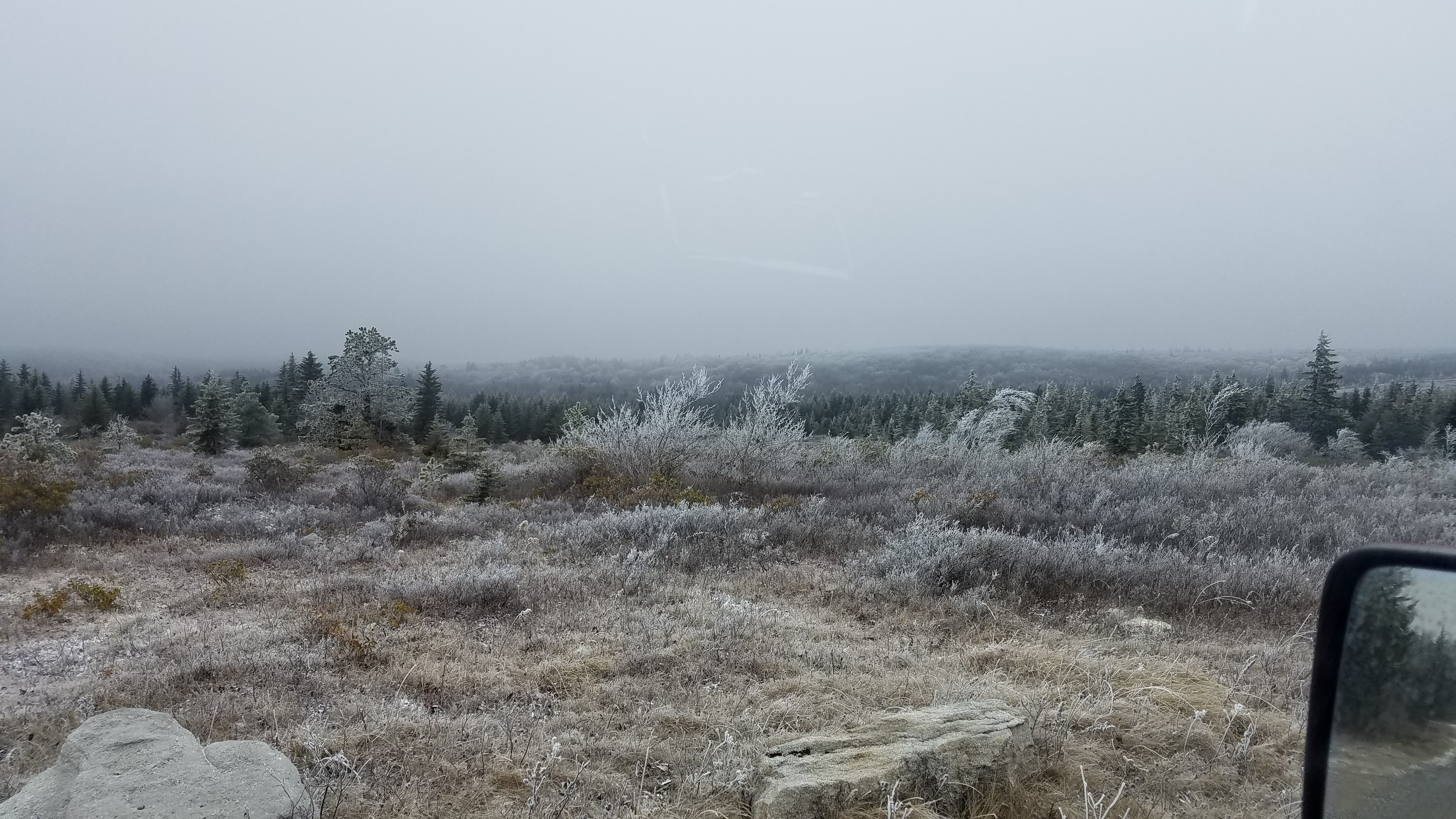 As I wrote last week, I had made plans to go to a place called the Dolly Sods wilderness for a weekend of backpacking.  I’d been planning for months, to return to this place that I was so familiar and comfortable with.  A place that felt like home to me.  As fate would have it, a fire ban was instituted in the area, which quickly put this trip into an unsafe endeavor.  Being wet and cold at 4000+ feet in December is not something one just says “oh well” to.

I had to cancel.  But, with some encouragement and quick planning, I was able to find a place nearby (Flatrock/ Roaring Plains) that was literally “across the street”, just south of the area I truly wanted to be in.
My hope was that it would be “close enough” to Dolly Sods.  The terrain, the ecosystem, and the feeling would be unknown, yet familiar enough to allow some semblance of sanctuary in the woods.
My hopes were wrong.

Yes, this area is basically the same type of terrain (a high plateau), around the same altitude, and about 6 miles south of Dolly Sods.  That is largely where the similarities ended, and to my worst fears, it was a larger struggle to want to stay than to hike out to depart.  I had never been here before, but I had heard good things.

In the 2 – 3 days I had to plan this trip, my first in over 3 years, I had let optimism cloud my judgment.  Those “good things” I had heard were trip reports from summer months.  The “outstanding views from rocky outcrops” were best seen when the rocky outcrops weren’t covered in an icy glaze, where one slip plummets you 1500+ feet.  “Cool, clear creeks, with swimming holes and shaded by rhododendron” are much more enjoyable when it’s 70 degrees out, not 15.
I had placed so much “hope” into this trip that I did not stop to see the forest for the trees.  The reality was that the open blueberry fields and stunted spruce of Dolly Sods was replaced by dense rhododendron thickets, huge, impassible pine forests, and rotten birch trees.  The dispersed campsites that allow me to find “just the right spot” north of here gave way to a minimal selection of 3 campsites in the whole area.  One with no water, one with no trees, and the final one, which I chose, with nothing but sponge-like decaying birch trees.
Given even a week longer to plan this trip, I could have accommodated for this.  I could have researched more trip reports, maps, and photos of the area.  I would have taken different trails, or brought different gear.  But alas, I did not.  I was so excited to get outside the world that I neglected to do it with any real foresight.
As I hit the trail, the first flurries began to fall.  The trail itself was a bog, but it was beautiful nonetheless.  I hit a few promising overlooks and took pictures and video.  Passing through mossy spruce forests and rhododendron tunnels so thick and tall that you couldn’t see 4 feet into the woods.  This went on for a few hours, and I neared my basecamp.

After the enjoyable hike in, my camp was a disappointment to say the least.  It was the only cleared, vaguely level area for miles.  I set up, stringing my tarp and unpacking my gear, and the optimism quickly faded.  The resources I had nearby had been completely stripped of anything useful by previous campers, leaving me with frozen, spongy, rotten logs.  I was already becoming chilled, so starting a fire became a priority.

For the next 6 – 7 hours, I did nothing but tend to and nurse the meager flames.  I never sat down to relax or write, as I would be doing in Dolly Sods.  I never explored from my basecamp, looking for interesting things.  I never even ate dinner.  My entire night was spent splitting and turning logs, feeding small twigs into the fire, and hoping that the next piece of wood I tried would form some coals, rather than just shredded ash.
Every few hours, I would press the “I’m OK” button on my satellite device, letting Sarah know that I was in no danger, and that i was neither lost nor injured.  But the truth was, I was miserable.
By 5:30 PM, night had completely fallen.  The winds were howling at a constant 30 miles-per-hour, gusting to probably twice that, and sleet-like pellets were descending from the clouds. My fire was putting out about as much warmth as a candle, and when a dryer piece of wood was added, it burned up in a few minutes due to the wind.  The temperatures had fallen into the low teens, with a wind chill that was below zero.  I was cold, damp, and stressed.
At no point, mind you, did this become a “survival” situation.  I could have (and actually did) walk the two miles back out to the truck just for a few minutes of warmth and relief from the wind.  Had I become even remotely hypothermic or frostbitten, i needed only to crawl into my warm, dry sleeping bag, and all would be well.  I’ve been colder, wetter, and had heavier winds, and I still enjoyed myself, almost taking a sick pride in “toughing it out”.
But this trip was never supposed to be about “toughing it out”.  I intended to escape into a familiar place, where I knew the terrain, weather, resources, and special places like the back of my hand.  Where I didn’t have to concentrate so much on trying to enjoy a new place and learn my surroundings and resources.
Still, by that 5:30 message, I was ready to give up and lie down in my hammock.  I didn’t though.  I had a tenacious determination to stoke the fire into something that would last even long enough for me to sit down and cook a quick meal.  I wanted so badly to make this feel like the trips I have taken so many times in the past, where I could finally, blissfully, sit and just think by the fire.  Think about Shelby.  Think about Megan.  Think about my life and where it has taken me over the years.  Think about Sarah, and how she was handling me being away somewhere for the first time, with spotty communication at best.
It never happened.  I never reached that contented, meditative state that I needed.  Neither Megan, nor Shelby, nor Sarah crossed my mind much, other than to remember to send a sporadic “I’m OK” message.  My mind was consumed with trying so hard to make this place feel like “home” that I never stopped to consider anything else.
That first night soured my mind to the point that the next morning, I packed up and left.  I had intended for a second night, but regardless of the fact that I was able to find some good wood half a mile away and have an outstanding fire just after sunrise, I had already given up.  It took me three hours to pack up (it normally takes 15 minutes), largely due to the battle in my mind between pessimism and optimism.  After the night I experienced, I let pessimism win.
As I arrived back home, and told Sarah everything about my trip, I broke down.  I was disappointed in myself for bailing out.  I had stinging thoughts about the first time I went on a trip without Megan, where I had an anxiety attack in the woods, fearing for Megan’s health back home.    There were huge amounts of self-doubt in my abilities, even though many people couldn’t have even coaxed a flame from the resources I had at hand, whereas I had “something” for 7 hours.  I had hoped for much more than what reality provided.
So, in this case, hope DID matter.  Hope got me into a situation where I was tired, cold, and miserable.  Hope overrode judgment.  I could have simply stayed home, and waited out the fire ban or delayed the trip a week or two so I had more time to set my expectations.  Hope mattered to the point that it was detrimental to my soul, overriding the reality of winter in unknown mountains.
Would it had been any better in Dolly Sods, my original destination?  Maybe, maybe not.  I don’t know, but what I DO know is that I drove through that area on my way home, and it was stunningly gorgeous, cold, and ice-covered.  I could see down into the gently sloping valley from the road, where I would have been encamped, and it looked as inviting as ever.  As I passed by, part of me wanted to stop and walk down there, but I decided to leave it for another trip, one where hope can possibly become reality.