Yesterday was my fiance’s 30th Birthday. I don’t say “would have been” because it doesn’t make me feel like I am allowed to still celebrate it when I saw that. So instead, I say that it was, and is, the day he turned thirty. Even if he isn’t here physically, saying it that IS his birthday helps me have permission to still celebrate.

The morning began with a thick, heavy fog – a very rare sight on the Texas coast. His family and I came down Thursday night to spend the weekend at their beach house. It’s one of our go-to places to get away together on the hard milestones like this one. After some coffee, we headed for breakfast. Being a photographer, I couldn’t resist the desire to drive the mile down the road to the beach before eating and capture some images of the pier in the fog. Drew’s mom and I made a quick trip there, and the scene was utterly surreal. I’ve scarcely ever seen such thick fog, especially approaching nearly 10am. I grabbed my camera and went to work. The horizon was totally gone, lost in a milky white haze that waves drifted out of. The pier disappeared right into the fog, seeming to go on forever. Surfers dissipated into an abyss of white. It was a photographer’s dream. I couldn’t help but think, he knew exactly how to pull me out of my sadness that morning. To give me an unreal photo op. No matter what else is happening, when I am behind a camera I go into another world entirely… present in the moment, focused, and fully alive. 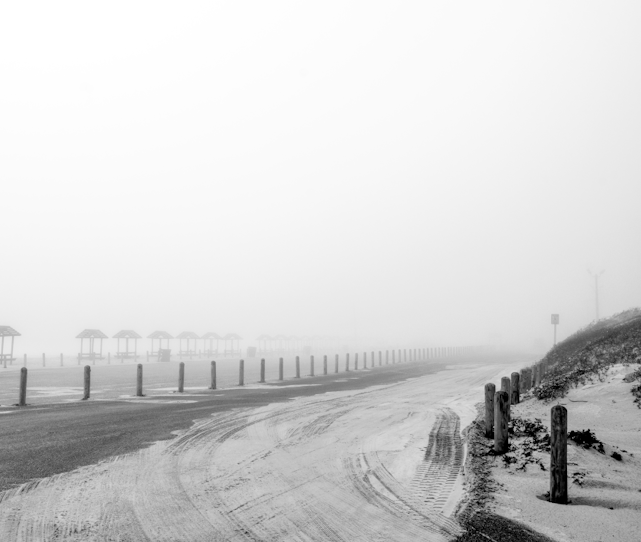 After getting my shots – and giddy with excitement – I returned back to the car with his mom to head for breakfast. As we approached… we stopped in our tracks, our mouths dropped. There in front of us on the beach, right in front of the car, was a toy helicopter. And not just that, but a yellow toy helicopter that was wrecked and broken, with the rotor blades missing. Speechless. If you don’t know my whole story… Drew was a pilot, and he died in a crash. In a yellow helicopter… which hit power lines… and when we viewed the wreckage the rotor blades were cut off. Whoa. 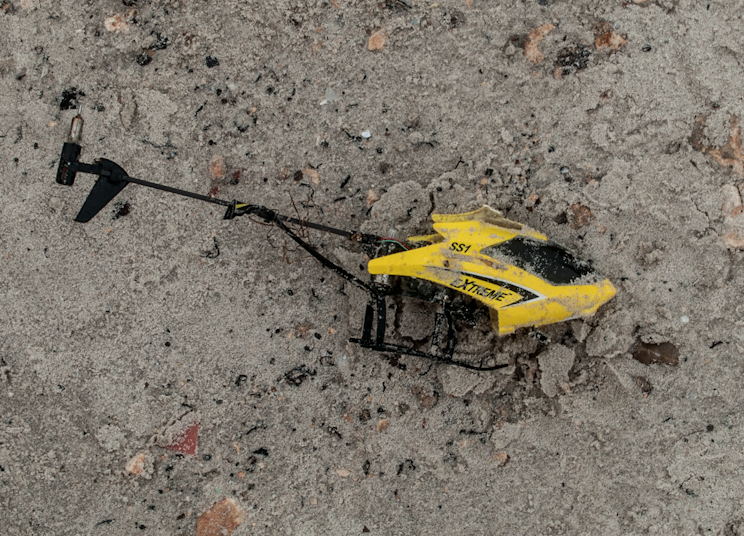 I think I’m still speechless about this one. It’s weird, it’s downright creepy – but then again he always had a dark sense of humor, so this is SO him. He has never been subtle about sending signs. Especially on birthdays. For my 30th birthday – the first without him – I found his name drawn three feet wide into a rock wall in the middle of nowhere in Arizona…. right after a helicopter flew by. How do you explain that? I couldn’t. I decided, I know, it has to be him.

And the eerie thing was… as we looked up and around us, we noticed that the fog had started to lift suddenly. Now I know it’s not possible that my dead fiancé controls the weather, logically, but still I couldn’t help but feel like he’d had a hand in keeping that fog there just long enough to drag me out to the beach. He would have known more than anyone that a thick fog or big thunderstorm would have had me scrambling for my camera. And he would have known I’d go right to the beach, and right for that exact pier. Had it been a sunny morning, we’d have gone straight to breakfast… and we’d have never found that helicopter. And really… that thing could have been anywhere on the miles and miles of beach that span Padre Island. Or in a trash can. But it wasn’t. It was right exactly where I would happy to be led by this mysterious fog. And exactly where his mom decided to park the car, despite a mostly empty lot. I can’t believe it as anything else put purposeful.

And it turns out, that little yellow sign helped get me through the day. It felt like a hello from him. Reminded me of his sense of humor, which I miss so much, and made me feel that perhaps him and his dark humor are very much alive and well in some other way. I kept me imagining his bright, playful spirit… happy, light, joking around with us, ready for a party. I had hoped for a sign from him, but I sure didn’t expect one like that.

There were two other things helped me be able to celebrate this day. One of those is the people in my life. My friends and family from far and wide texted me, called me, and made it very clear that I was not going through this day alone. They left birthday messages online to him, just as if he were still here. That’s an important one – for loved ones to wish him a happy birthday like he never left us. Because they get it, he never did leave us – not entirely. For them to wrap me up in their love and support not only made me feel safe, but also touched my heart so deeply because I am also watching them continue to take care of the most important person in his world for him. I know in some way, they are bringing him joy and comfort, which does the same for me.

The other thing that helped a lot was making something to honor him. I decided the best way to do that would be to get his family to help me create a special birthday message to him. We went out to the beach after dark and had a bonfire and a few beers in his honor. After a while, I got my camera out, and – using hot coals from the fire – we each took turns writing out part of a birthday message to him in the air. This morning, I compiled them all together in the computer into this:

I had thought of the idea to do it the day before… and I really gotta say, just knowing that I had some kind of plan for a way to honor him helped me a lot. It gave me something to look forward to on a very very hard day. I just kept clinging to that. I think having even some small kind of plans for days like these really help. I also warned my closest family and friends that I may need to call them and have a total breakdown this weekend. Of course, they already knew that, but it was more for my peace of mind and security to know I had people ready and waiting to pick me up. That’s just me, I need to make my needs very clear so that I can feel safe and free to relax into whatever comes, joy or pain. It really helps.

All in all, it was a beautiful day. It was full of love, incredible surprises, and natural wonders. I feel like I honored him to the fullest. I feel like he knows it. I still cried. Of course. Tonight I had a pretty bad breakdown. But you know, that’s okay I think. Because the good outweighed the bad on his day. For me and for his family and everyone close to me, it was really a pretty beautiful day of being together and appreciating each other deeper than we ever knew how to before he died.