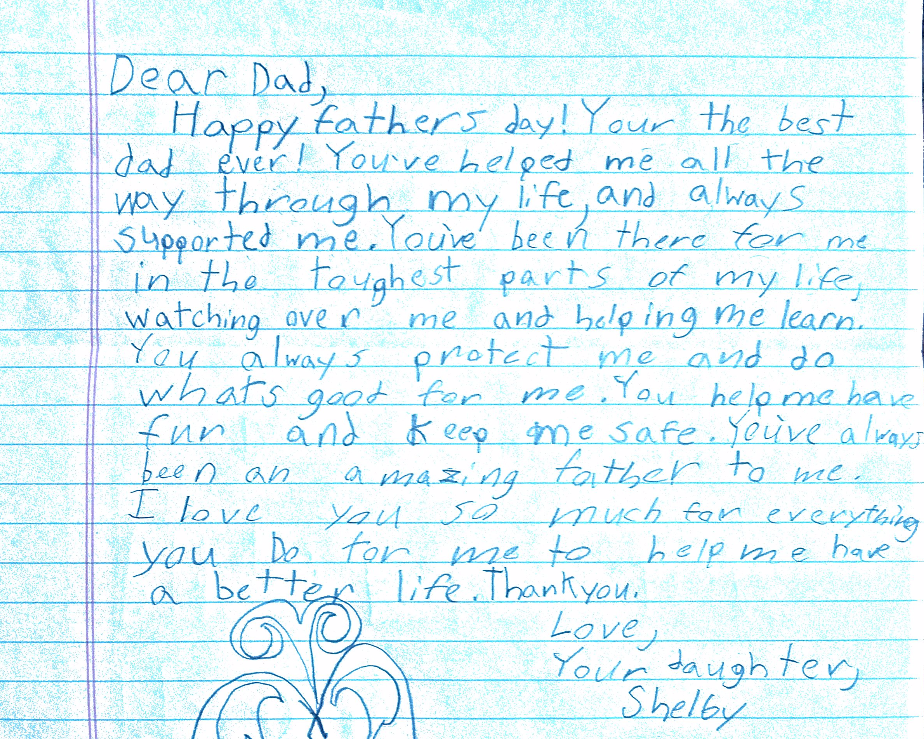 Father’s Day 2017. For once, we had a weekend day where there was nothing to do.  We had visited with both mine and Megan’s dads on Saturday, specifically planning to have an open day wedged into the seemingly constant stream of other events that have been taking time on our weekends together.

Sarah was awake and moving well before i was (a fairly rare occurrence), and Shelby slept until 10:30 in the morning (smashing her previous record of 9:45).  We sat out on the deck, listened to music, and did nothing….glorious, breathtaking nothing.

Then Shelby presented me with a letter she wrote.

Happy father’s day! You’re the best dad ever!  You’ve helped me all the way through my life, and always supported me.  You’ve been there for me in the toughest parts of my life, watching over me and helping me learn.  You always protect me and do what’s good for me.  You help me have fun and keep me safe.  You’ve always been an amazing father to me.  I love you so much for everything you do for me to help me have a better life.  Thank you.

Cue tears.  From both Sarah and I (Sarah knew she wrote a letter, but didn’t know what it said until that point).  I grabbed Shelby and hugged her for what seemed like 2 or 3 minutes.

It wasn’t the fact that she wrote the letter.  It wasn’t the boilerplate “You’re the best dad ever!” either (I received that coffee mug, proclaiming my status as #1 dad years ago).  Truthfully, It was the “Thank you” she wrote in closing.

She’s 10 now.  It’s been almost three years since she said goodbye to her mother.  That day, she had the forethought to tell Megan goodbye, kiss her forehead, and ask to leave the room before “it” happened.  She will never have the visions that I do, of watching Megan slip away.   She’ll hopefully never know what it’s like to her an incessant beeping slowly dwindle from 80 times a minute to 3.  Shelby was there that day, but being only 7 at the time, I’m not sure how much she remembers, or has begun to process.

But I’m seeing glimpses of it.  When she wrote about being there in the toughest parts of her life, I can’t imagine she’s talking about anything other than losing Megan.  She doesn’t talk about it at all, preferring to only remember the happy memories.  I’ve never heard her talk about seeing Megan in the hospital, but she sure remembers vacations to Myrtle Beach, or halloween costumes that her and Megan made.

Her putting into words, on paper, what she felt is a big step for ME.  Even if it was nonspecific, she’s finding her emotions.  I’ve been terrified of that day, when she begins thinking critically about the fact that her mother died when she was so little.  Sarah went through an almost identical experience, and it took her quite some time to even begin processing it.

But, Shelby being Shelby, she’s very stiff upper lipped about things, at least for now.  I would not have put it past her to write “Thanks for taking care of me when Mom died, that kind of sucked, but at least I got Ice Cream!”

She’s a straight shooter, and still far too young to really have deep thoughts about her own emotions.  Just like her mom.  So, when she opens up in any little way, even realizing that she HAD a “tough part in her her life”, it’s a big deal to me.

We didn’t really talk about anything after reading her letter.  She knows that both Sarah and I will be there if she wants or needs to express a feeling about anything.  We simply went about the rest of the day lazily enjoying the sun.  Shelby’s emotions may be starting to show a little, but we won’t pry.  That is for her to decide to share.

Which is why this letter was so important that is being kept in our safe.  It meant more to me than any card, or #1 dad mug, or t-shirt she may have gotten me that alluded to me being the best “farter”.  This letter was unsolicited, and nobody suggested it to her.  Under her own volition, she showed an appreciation for me when she had some tough times, and thanked me.  It was just a scrap of notebook paper and 10 minutes with a pencil, but it is the best gift Shelby has ever given to me.